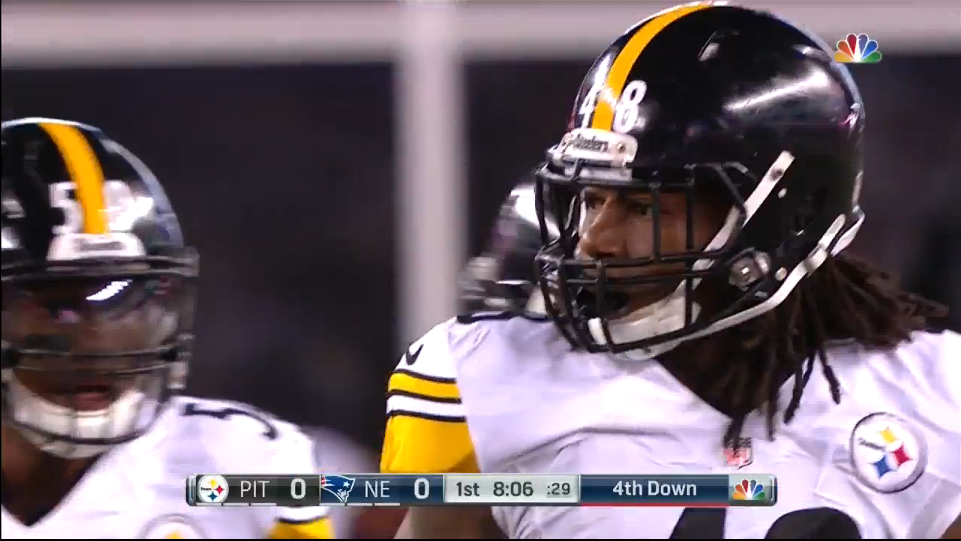 Got a lot of questions about rookie outside linebacker Bud Dupree’s first ever NFL game, so I went back to the tape to break it down for you guys. A couple flashes here and there, but overall Dupree suffered plenty of typical rookie struggles against the New England Patriots, some more noticeable than others.

Dupree’s first play was a sack of Tom Brady (technically no yards were lost, a great start for any rookie edge rusher playing in their first real NFL game. Unfortunately Dupree was left completely unblocked off the left side to track down one of the least agile quarterbacks in the game, so even as a rookie I can’t give him too much credit here.

The rest of Dupree’s game as a pass rusher was difficult to evaluate, as Brady consistently got the ball out so quickly that the Steelers rushers rarely had time to even engage their blocker. That’s how wide open receivers were right off the snap.

In the second quarter Dupree got a step on backup right tackle Marcus Cannon off the snap, but allowed a slight shove to knock him off his feet too easily.

Dupree might have been a little off balance, but he’s got to stay up here. Can’t help your team on the ground.

Early third quarter, Dupree got sealed inside by a double-team and lost the edge. Tough spot for a rookie for sure, but he was a little late off the ball, which allowed the blockers to initiate contact.

Goes back to something I always say, be proactive defensively, not just reactive to what offenses are doing. That said, once Dupree gets doubled, this basically becomes Ryan Shazier’s play to make, which he does with ease before the tight end can work off of Dupree and on to him.

Dupree’s only other tackle in the game came on this play, a first-and-ten, nine-yard pickup by Dion Lewis.

If he reads his run/pass keys quicker here, he sees the low-hat get-off of the offensive line, and is able to react quicker from his position in the slot. Instead he doesn’t cover ground to the line of scrimmage, and allows himself to be blocked easily (at least initially) by wide receiverDanny Amendola. He does get off of the block to help out with the tackle, but another example of Dupree being a little slow to process, something that showed up a lot in college.

Then of course there was probably Dupree’s most egregious snap of the game, when he should have carried Rob Gronkowski vertically instead of just sinking to defend the curl/flat.

Not sure what the miscommunication is, but on another view in coaches film, you can see Mike Mitchell tell him to take Gronkowski as the safety moves to defend the other side of the field. Rookie mistake, but obviously a big one with the score 21-14 and just over 11 minutes remaining.

Very next play, Dupree tries to bend the edge against Sebastian Vollmer and can’t, getting pushed upfield past the pocket.

His first step is such a weapon, but he’s still too predictable as a pass rusher. I’d love to see him convert that burst off the line of scrimmage into a power rush and get nasty at the point of attack. Dupree just doesn’t have elite level bend to win the edge as consistently as he wants.

He does, however, possess one of the elite get-offs in the NFL when he times it right. Dupree is shot out of a cannon on this play, helping to cause an incompletion with his activity.

I’m being picky, but I’d love to see him overpower the running back here and get a hit on the quarterback. Great blitz pickup by Brandon Bolden though, who has to react quickly and still stonewalls Dupree. Low man wins.

Doesn’t use his hands later in the game and get swallowed up by Vollmer with ease. Have to use your hands if you want to win in the NFL, can’t consistently beat guys with athleticism and quickness in this league.

All in all there were a few positives for Dupree in his first NFL start, but still plenty of things to improve on. Nothing is really overtly concerning, but he won’t be a consistently effective pass rusher until he learns to use his hands and develop a full repertoire of moves off the edge. Those traits can be gained in time, and when they are combined with his burst and quickness, the combination can be lethal.