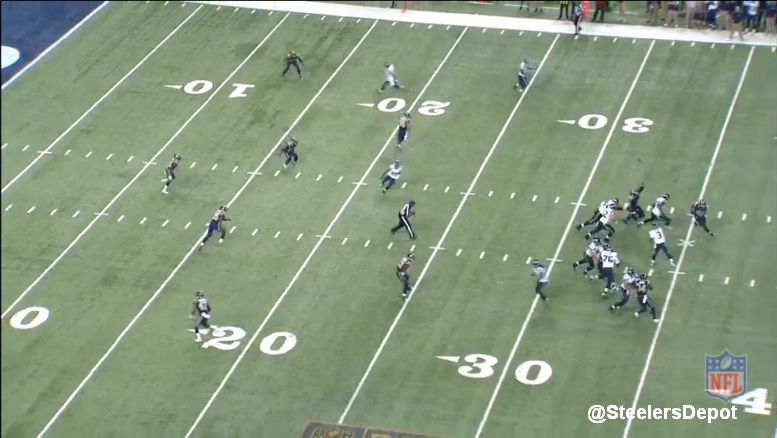 This year, Jon Ledyard and I will be collaborating our scouting reports. We’ll play to our strengths – he’ll be focusing on the individuals while I’ll be looking at overall scheme. These reports will be broken down into two articles, one for offense and one for defense.

Our reports for the St. Louis Rams’ defense.

The Rams, as you know, employ a 4-3 defense. Their defensive line is scary and I’m sure Jon’s section will highlight that group, effectively putting fear into the minds of every Steelers’ fan. But what people don’t talk about is the coaching staff. Gregg Williams is the defensive coordinator and Bountygate aside, has been in the league forever with relatively good marks. Their defensive line coach is Mike Waufle, coaching defensive line in the NFL since 1998. Over the last eight years, Waufle coached teams have averaged over 44 sacks per year. Three times over that span has his group recorded over 50 sacks, including the Super Bowl winning 2007 New York Giants.

Aaron Donald primarily plays the three tech, meaning he’ll flip to either side based on the offense’s strength. The defensive line pieces will flip around so it’s hard to get a read on exactly where an individual plays. Expect each Steelers’ lineman to have different matchups throughout the game.

Donald has played on over 75% of the Rams’ snaps in the first two games. Michael Brockers is at just under 62% and free agent acquisition Nick Fairley has seen 27% and 21% of the snaps over the first two weeks – pretty scant playing time. Of course, this rotation keeps their DL fresh.

St. Louis will play with two three techniques, players lined up between guard and tackle to each side, instead of the traditional three/one technique. 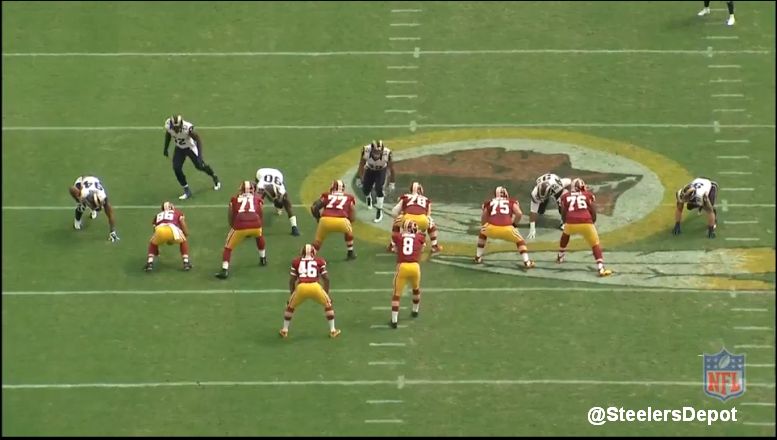 Seven of the Rams eight sacks have come from their defensive line. Cornerback LaMarcus Joyner has the other.

Their defensive line really gets after it, too. Similar to Cameron Heyward or Stephon Tuitt, you’ll see Donald and Brockers running downfield after the ball.

They will mix up their personnel groupings, running a 4-2-5 nickel and a 3-2-6 dime package, the latter often having strong safety Mark Barron in the box. Barron has played on 30% snaps the first two weeks. Like we saw with the San Francisco 49ers last week, the Rams do a nice job of mixing up their coverages. Lot of late snap rotation from two high to a single high look.

Here’s a pretty typical example of their rotation. From two-high to single high in Cover 3 Sky. 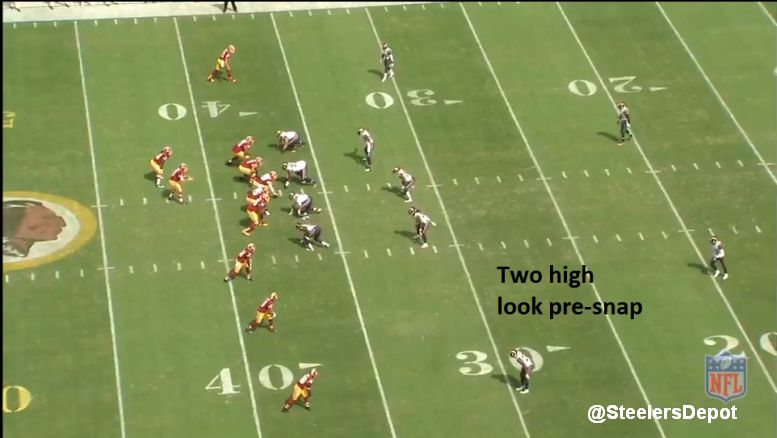 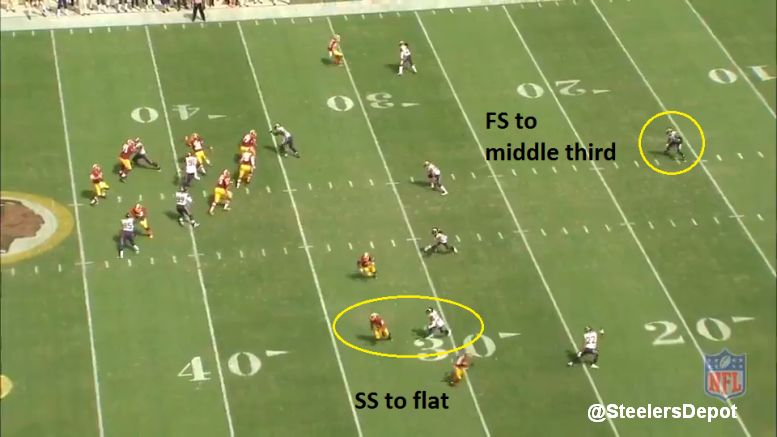 And a little more extreme. The nickel defender rotating and becoming the middle third defender while both safeties rotate down. Turns into a Cover 3 look. 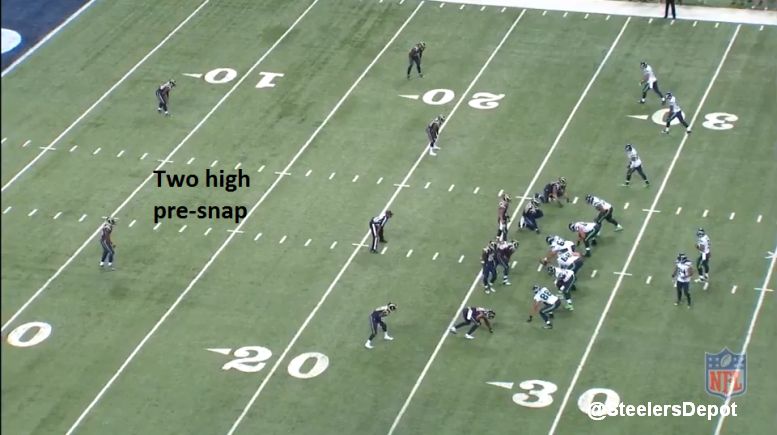 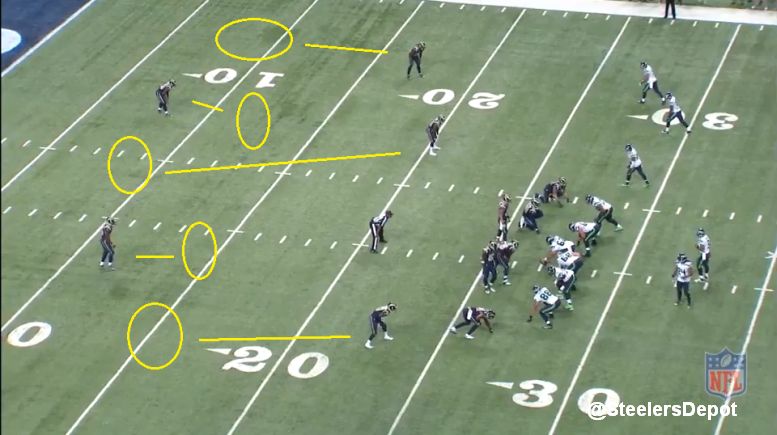 On third and short to medium, expect to see a lot of man-free coverage, Cover 1. Earlier downs show more of a mix between man and zone.

And true to a Gregg Williams defense, it’s not vanilla. You might think that because they have a strong front four, they would routinely drop seven and play it safe. But the Rams show some aggressive blitz looks.

Here’s a five man pressure with defensive backs coming off of each edge, meeting and sacking Russell Wilson. 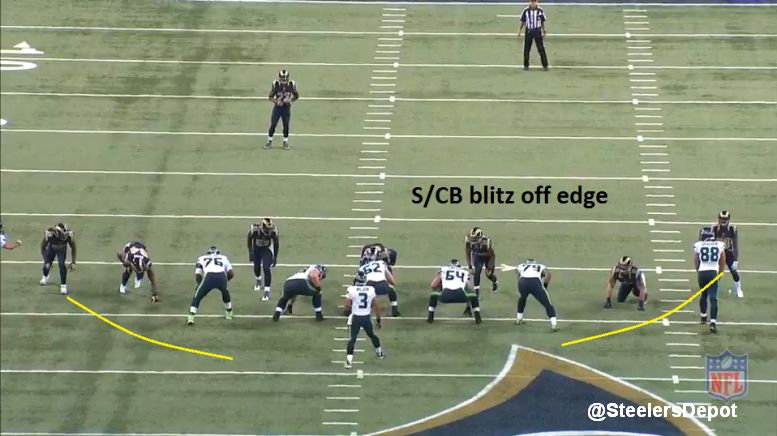 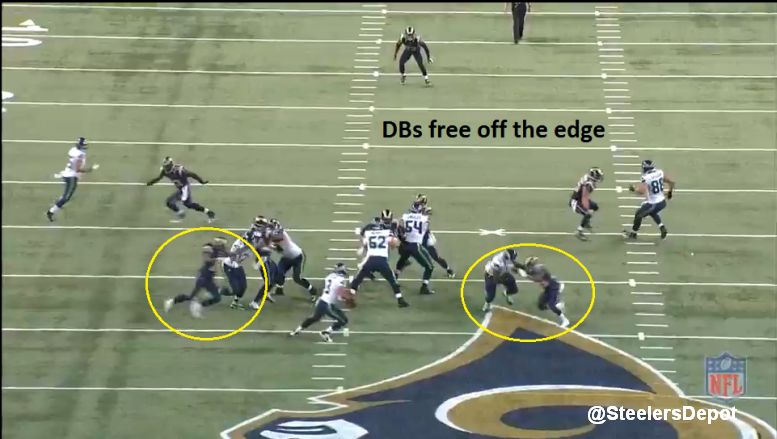 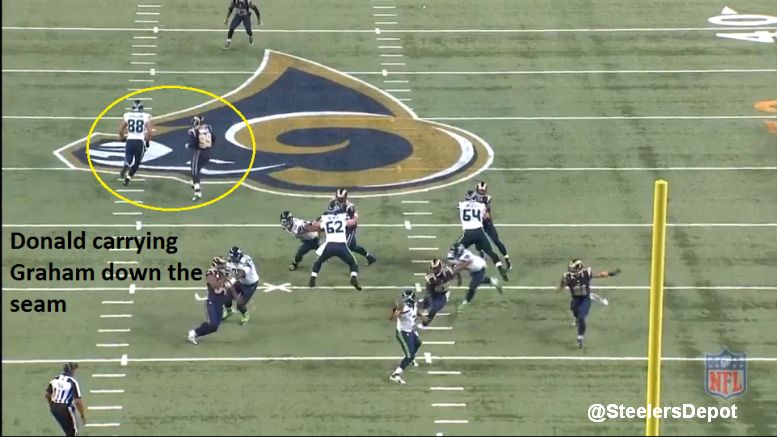 That’s a defensive tackle playing man coverage on one of the most athletic tight ends in the league. Has to be the only player, and the only coordinator comfortable enough to trust it, in the league to be asked to execute that assignment.

In 2014, six of the Rams’ sacks came from defensive backs, one of the highest marks in the league. For reference, the Steelers had zero of those.

My scouting report on the Rams offense was admittedly scathing, but their defense is a much more competitive group, featuring one of the best units in football in the trenches. Statistically the Rams have struggled to stop the run after shutting down Marshawn Lynch in Week 1, giving up 182 rushing yards to Matt Jones and Alfred Morris last week. Despite being banged up, the St. Louis secondary has been on point this season, giving up only 205 yards passing per game through two weeks.

Defensive tackle Aaron Donald has quickly become one of the best defensive players in the game in just his second season, terrorizing offensive lines with his quickness, burst, and elite hand usage at the point of attack. Simply put, Donald is as dominant an interior defensive lineman as I can remember seeing, and he’s only going to keep getting better.

I mean….I’m still speechless on this play. The hand usage, the body control, the quickness…how many times have we seen a defensive tackle work out of a double team with a perfectly executed spin move? By the looks of things, the Redskins offensive line shares our surprise at the move. Donald is a marvel.

He may already be the most talented pass rusher amongst all interior defensive linemen in football with 2.5 sacks already, but Donald is also nearly unstoppable as a run defender. Jeff Fisher allows his crew to do a ton of one-gap penetrating, which perfectly suits Donald’s elite first step and burst off of the ball.

He’s not alone on a defensive line that is loaded with talent either, as Robert Quinn remains one of the best speed rushers in the game.William Hayes and Chris Long round off a deep group of edge rushers, while Nick Fairley and Ethan Westbrooks give the Rams great depth on their interior defensive line behind Michael Brockers and Donald. Eight sacks in two games is nothing to sneeze at, and there have been plenty more quarterback pressures that don’t go on the stat sheet.

All are tremendous fits as one-gap penetrator types, as Fisher’s defense thrives on athleticism and physicality along the front. Brockers and Donald are as heady as they are physically impressive too, with the former saying he knew what play Seattle was going to run to attempt to pick up a first down on fourth-and-short in overtime, based on the formation the Seahawks were in.

Brockers, showing great power and hand usage at the POA, gets the first hit here on Lynch, before Donald comes flying in to finish the running back off. Brilliant play by two of the best in the business to win the game for St. Louis.

Long doesn’t have the lateral quickness of a Quinn or even a Donald, but even at 30 years old, his burst off the line of scrimmage is impressive. He’s a better run defender than Quinn (who most teams will try and run at), and still appears to be the emotional leader of the Rams defense along with James Laurinaitis.

Laurinaitis, whose name I did spell correctly on the first try by the way (Ed Note: Gold star awarded), was one of my favorite players in college during his years at Ohio State. It seems like he’s been around forever, but the middle linebacker is only 28 years old entering his seventh season. He’s as physical and nasty as ever, but he’ll still overrun tackles and has trouble getting off blocks. Laurinaitis is a good scheme fit in St. Louis, and will fly all over the field with good quickness.

Alec Ogletree is a highly athletic linebacker who the team will roll out in coverage with solid results. He’s still raw, especially for a first rounder, but his natural abilities and quickness allow him to make a lot of plays others at his position can’t. He will bite on play-action fakes, badly at times.

Takes several false steps here and is very slow to recognize the fake. Not uncommon for Ogletree, as positional discipline remains a concern.

If you think Ogletree’s positional discipline is an issue, meet Janoris Jenkins, cornerback for the St. Louis Rams. The fourth-year pro has a lengthy history of biting on double moves and pump fakes, allowing plenty of big plays due to his risky style.

Jenkins (right outside corner in the above GIF) is extremely talented and athletic, but his skills have gone to waste due to his lack of cerebral prowess. He’s incredibly quick to close on the football, and even more willing. Unfortunately for him, teams know that and utilize his tendencies against him consistently.

The loss of E.J. Gaines is a big one for St. Louis, but Trumaine Johnson is quickly becoming the team’s top cornerback. He’s not as athletic as Jenkins, but Johnson has the length and instincts a lot of teams want in their corners.

LaMarcus Joyner is the jack-of-all-trades in this defense. Played safety and corner in college, and mans the nickel spot for St. Louis with good results. Strong run defender, physical corner, and excellent tackler.

The Rams safeties are two of the brighter players at their position in the league, as T.J. McDonald continues to grow into a complete player. He’s smart and technically sound in coverage, while providing ferocious run support and in-the-box physicality.

Rodney McLeod is as quick as it gets for a safety, and he’s often used in single-high situations with Mark Barron or McDonald closer to the line of scrimmage. The defense will also operate from their base 4-3 look with either Barron and McDonald acting as the third linebacker and the other as the strong safety, while McLeod mans his free safety spot. Little similar wrinkle to San Francisco in their desire to get three safeties on the field at one time thanks to the uncommon depth they enjoy at the position.

Despite all their young promise in the secondary, St. Louis will give up plenty of underneath passes attempting to take away the big play. Opposing quarterbacks have completed almost 81 percent of their passes through two weeks, the second worst mark in football for a defense. That said, opponents average of 6.7 yards per pass attempt is one of the lower marks in the league, so St. Louis has done a good job taking away the deep ball and making teams earn their progress on short-to-intermediate throws.

Granted, neither Seattle nor Washington offers the pass-heavy, downfield arsenal that Pittsburgh boasts, so Sunday will be a very new challenge for St. Louis’ defense.

Punter Johnny Hekker has a pretty average leg with poor hang time from what I saw on tape. Because of his short kicks, return men often don’t have a lot of space to work with, and his coverage unit was fantastic against Washington after giving up a punt return touchdown to Tyler Lockett in Week 1.

Isaiah Pead and Mo Alexander are the gunners and both do their jobs very well from what I saw on tape. Bradley Marquez is the upback, but I noticed he is very eager to get out of the backfield and hit someone down the field. Perhaps a little too eager, something to keep an eye on.