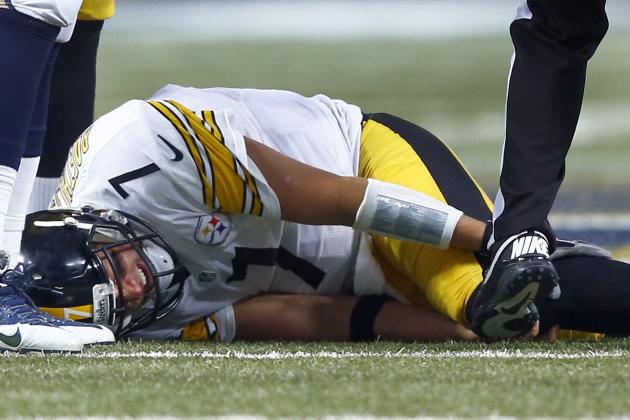 Pittsburgh Steelers quarterback Ben Roethlisberger will be sidelined for an extended amount of time due to the left knee injury that he suffered on Sunday, but he’s still hopeful that he can help the offense even if he might be on crutches.

Roethlisberger told the media Tuesday that he hopes to be on the sideline Thursday night when the Steelers host the Baltimore Ravens because he wants to be able to communicate with back-up Michael Vick, the wide receivers and the offensive line.

While it would seem to be a forgone conclusion that that would indeed happen, Roethlisberger said Monday that he’ll have to first get head coach Mike Tomlin to lift his “no crutches on the sideline” rule. The quarterback is hoping to be able to ditch his crutches by Thursday night if unable to do that.

A frustrated Roethlisberger reportedly told the media that he will be back from his MCL sprain as soon as possible and that he will more than likely have to wear a knee brace when he does. He said his MCL must first heal for stability purposes and that the bone bruise that he suffered is more of a pain tolerance thing. Like Tomlin, he didn’t put a timetable on his return.

“It is kind of one of those things that we have to take it week to week,” Roethlisberger said. “I know I am out this week and we will re-evaluate next week and kind of go from there. There is no way to put a timetable on it.”

Ben said he is frustrated. He said MCL must heal for stability. The bone bruise is a pain tolerance issue.

Mike Tomlin apparently has a "no crutch" rule for the sidelines. I honestly don't know if my money's on Ben or MT winning this one.

Ben Roethlisberger: "We don't have a timeline yet. Maybe that's the best way to keep from getting anxious."

Ben has never played with a brace before, but says he's been told he will have to learn.