The Pittsburgh Steelers offense looked awfully effete on Sunday night during the Hall of Fame game versus the Minnesota Vikings, a fact that can be safely accounted for wholesale simply by pointing out that only three starters—all offensive linemen—actually played.

With the top two three traditional running backs sidelined, in addition to the top two quarterbacks, the top tight end, and the top four wide receivers, it is obviously why the offense struggled. One player who I believe largely held his own, however, was center Cody Wallace, starting in place of Maurkice Pouncey.

There were certainly moments in the game in which he was outplayed and overmatched, particularly with the Vikings’ starters on the field, a time or two, he was clearly walked back considerably. But overall, I liked what I saw, not just from an end standpoint, but also in terms of the means.

Ever since he first got into a game with the Steelers, Wallace made himself stand out with his tenacity and aggressive play, which was evident on Sunday night.

This was the second play of the game against starting defensive tackle Linval Joseph, an underrated player. While there is nothing particularly exceptional about this play—Wallace and David DeCastro worked a double team to drive him out of what looked like should have been the hole—you have to like his persistence in walking the lineman off the perimeter of the play. 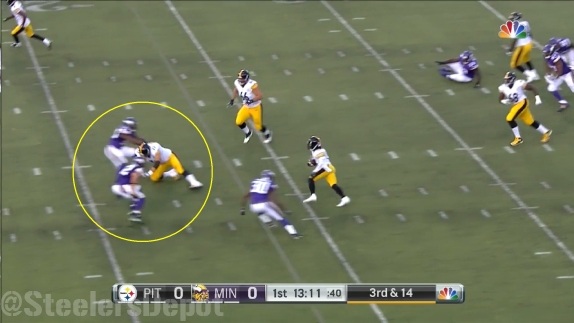 The veteran journeyman is not the most agile of offensive linemen, but he showed on this screen for Dri Archer that he has the ability to get out in front of a play in space, undercutting linebacker Gerald Hodges just enough to eliminate him from the play. With DeCastro helping to seal the left side, it was only the impressive recovery of safety Harrison Smith that prevented Archer from finding open space.

Wallace is very impressive initially at the point of attack on this run to open the Steelers’ third possession. You can see Shamar Stephen sustain excellent leverage off the ball, but Wallace is stout until the run is past him, and then he persists on the block, resulting in the defensive tackle spilling on the ground, with the center sure to finish all the way down. 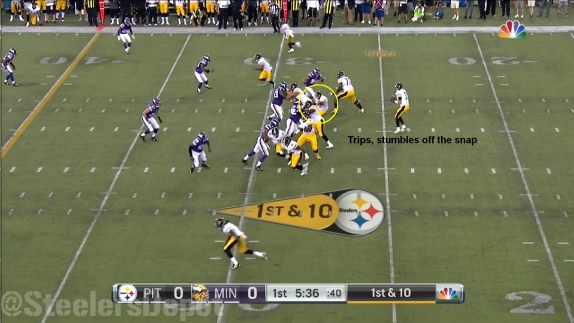 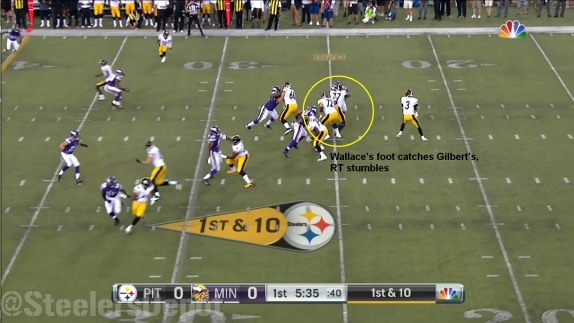 A few plays later was an unfortunate sequence for Wallace, as it appears to begin with him tripping over DeCastro off the snap. After recovering, he looks to provide help for Marcus Gilbert, but he ends up placing his foot in the right tackle’s path, with Gilbert tripping and allowing the defensive end to get a hand up and deflect the pass at the line of scrimmage.

Once again, on this draw for Archer on a third and long, we get a good look at Wallace’s tenacity as a blocker, helping to force Stephen upfield and then sealing him off on the backside to provide Archer room to maneuver in open space.

Wallace found more success in pass protection than in the running game, although I hasten to add that, while the back’s assignment is not always clear, a handful of runs that seem to reflect poorly on Wallace seemed to me the result of a running back opting for the wrong hole, or being forced into the wrong hole. There were some rough spots, but this was a good start for the veteran, who will be counted on this year.