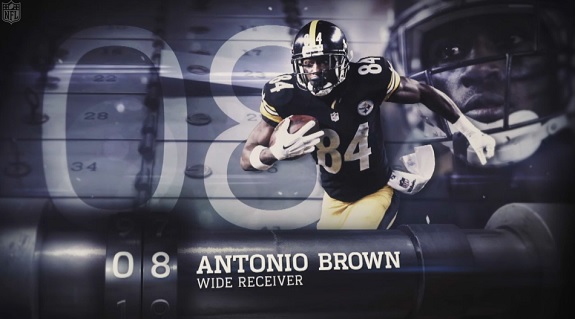 The NFL Network is currently counting down the top 10 players of 2015 and it’s been announced that Pittsburgh Steelers wide receiver Antonio Brown was ranked 8th overall.

“My number is 84. 8 times 4 is 32. 32 teams looked past me, even the Steelers. So every time I go out there, that’s a little added motivation,” said Brown during his video segment.

Now that Brown’s place in the top 10 is now known, it means Calvin Johnson of the Detroit Lions will be the top-ranked wide receiver this year.

Brown not only led the league in catches last season, he also had the most receiving yards. It should also be noted that the former sixth-round draft pick has caught at least 5 passes and has registered at least 50 yards receiving in 32 straight games.

Johnson is certainly one of the best in the league when it comes to wide receivers but you could argue that Brown deserves to be ranked higher than him this year.

Last year, Brown was ranked 23rd overall in the annual rankings that are supposedly voted on by NFL players.