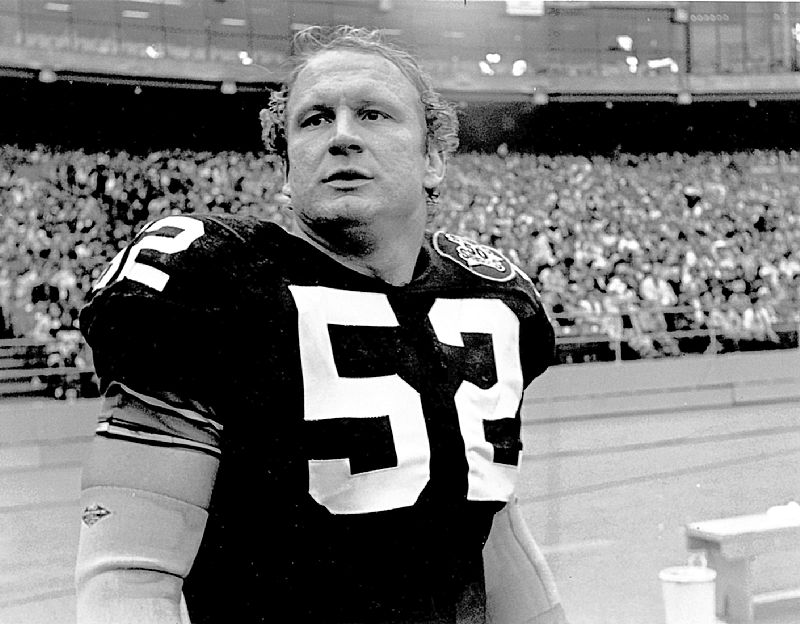 Few positions in Pittsburgh Steelers history have enjoyed the richness of talent that the center spot has over the past 50 years, starting the likes of Ray Mansfield, Mike Webster, Dermontti Dawson, Jeff Hartings, and now Maurkice Pouncey. Choosing the best player from that group is an unenviable task, but one that both Alex and I have been charged with. While great moments and seasons exist for all of these offensive lineman, no one had the longevity or success that Mike Webster did in Pittsburgh.

That is a list of the ridiculous on-field accomplishments of “Iron” Mike, a man who was known for vice-like strength and playing through just about any and every injury. For 150 straight games over ten consecutive years, Webster started every game in the center of Pittsburgh’s offensive line, as much of a force in the locker room as he was at blocking. During the 15 years Webster suited up for the Black and Gold, more seasons than any player in Steelers history, the hulking lineman missed just four games due to a dislocated elbow. Few epitomize the tough, physical demeanor of the Steelers dynasty quite like Webster did, a bruising, violent player who loved contact and never backed down from anyone.

Webster’s dedication off the field was the stuff of legends, constantly running stadium steps at Three Rivers and even lifting prior to games and practices. He was always in the weight room, bulking up from his rookie weight of 225 pounds to his playing weight of 260, adding much-needed weight to an undersized frame. Webster was always ready to play mentally, as he was widely-known as one of the NFL’s more cerebral players, constantly helping Terry Bradshaw set protections and recognize defensive alignments.

Webster gave his life for the game of football, quite literally. After retirement his physical and mental health began to decline sharply, and he struggled with drug use and homelessness. Doctors found a number of medical problems with Webster in the latter stages of his life, with significant brain trauma from his days in football identified as one of the leading causes for his lengthy list of issues.

Webster died at age 50, far too young for a player who meant so much to his teammates and the franchise he starred for. While his life after football remains a sad mystery in some ways, the dominant center left no doubt about his legacy when he was on the field. No player in Steelers history has played more games with the franchise than Webster’s 220, a record which alone should be enough to get him the nod as Pittsburgh’s greatest center ever. But thanks to a host of additional honors and consistently excellent play by Webster, that number hardly need stand alone in the long list of accomplishments that make him perhaps the finest center in NFL history.

Even with so many storied centers, we don’t even get to talk much about Ray Mansfield or Jeff Hartings, it’s hard to argue against Iron Mike. I secretly hoped Jon would choose another player but like getting a rectangular box on Christmas, I knew the result. This doesn’t take anything away from my selection of Dirt Dawson, but most will agree Webster is the choice. His absolutely heart-breaking post-football life tugs at my heartstrings, making me want to honor him now even more.

I don’t think I”m being a good spokesperson. So let me try again.

Dawson only started 13 fewer games than Webster in Pittsburgh and for ten years, Dirt never missed a game. That’s a streak that even the player deemed “iron” didn’t do. Dawson was a six-time first-team All-Pro, all consecutive years, while Webster did it only five without such a streak. Webster was second-team All-Decade in the 70s, the Miami Dolphins Jim Langer usurping him. Dawson claimed the first team spot in the 90s.

He anchored a 1994 team that brought Pittsburgh back to the Super Bowl, apart of the league’s top rushing attack in yards and sixth best in average.

Sometimes the highest praise comes from your peers outside of the city you played in. Bill Belichick, hated as he might be in these circles, knew Dawson well while coaching the Cleveland Browns. A man of typically few words, Belichick admired the Steelers’ center in a 2008 Pittsburgh Post Gazette article.

“He was one of the best players that we have ever played against at that position. He had exceptional quickness…Dawson had great leverage and quickness with his hands and his feet where he did a great job of keeping that pocket clean for [Neil] O’Donnell and those guys who played behind him…Without him making those blocks inside, a lot of those runs for [Jerome] Bettis and [Barry] Foster would not have been able to get downhill like they did…Dawson was outstanding; as well as his protection in the passing game.”

Has he ever praised Tom Brady like that? Almost-serious question. He’s gushing the way a teenage girl would over meeting One Direction.

When you hear that, when you look at the accolades that were even more impressive than Webster, you can forgive yourself for giving Webby the silver medal. Dawson has earned gold.