Jason Worilds isn’t missed by many fans. Good riddance, happy retirement, or some comment that falls inbetween. And I get it. He never turned out to be the dominant pass rusher by any standard. Enter rookie Bud Dupree, who will be tasked, and measured by fans, to do just that.

But there are so many other variables that Dupree should be measured in. I’ve mentioned it throughout the offseason, and we’ll go in depth today, all the hidden value Worilds brought. He started the year with 410 consecutive snaps. He never missed more than three in a row, playing 99% of the time during the regular season. Even with Arthur Moats, still learning to be a 3-4 OLB, it isn’t an automatic replacement.

Literally went through only 15 minutes of film the other day, jumping around from game to game. Even in that limited time, I was able to come up with just some of the assignments Dupree may be asked to mimic in the NFL.

To what extent I can’t say but I imagine Butler will play his OLBs over guard and center as Dick LeBeau did. Worilds did it 77 times last year, primarily on 3rd and long. We see it here against the Tennessee Titans, Worilds lined up over the offense’s left B gap. 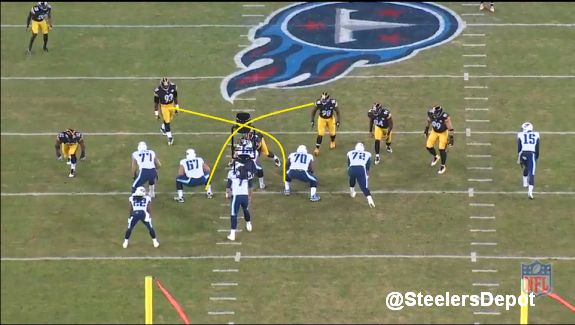 He slants into the playside A gap as Vince Williams loops over on a twist, freeing him up. 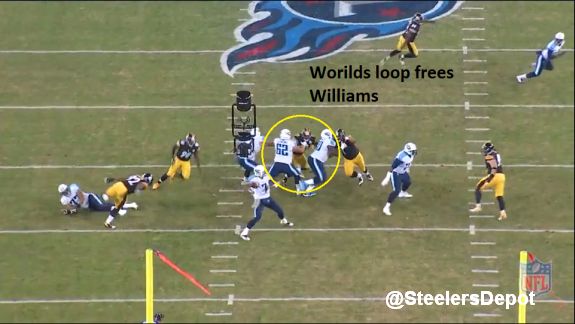 The next comes with Worilds lining up in his normal LOLB spot. He drops ten yards into a hook zone, reading the QB, and is rewarded with an interception. 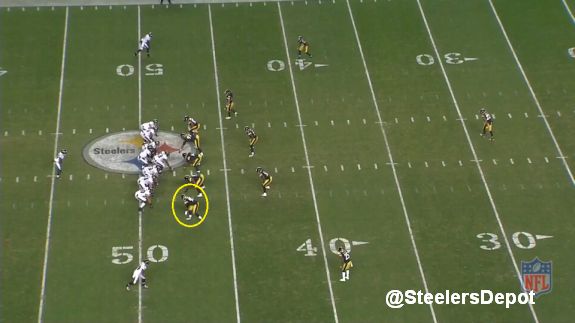 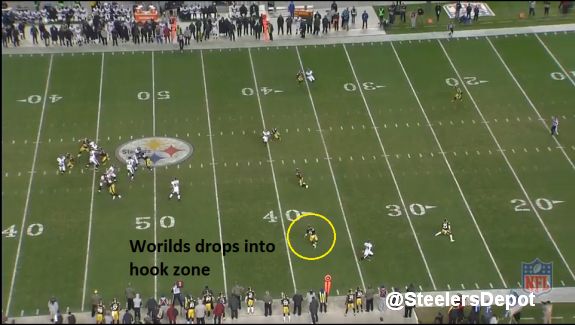 Our next example shows some of the nuiance, a point Keith Butler has made about the steep learning curve for rookie outside linebackers. Worilds initially lines up head up on the #2 TE (two tight end in itself will be a relatively new look for Dupree, playing against SEC offenses) to defend the D gap. 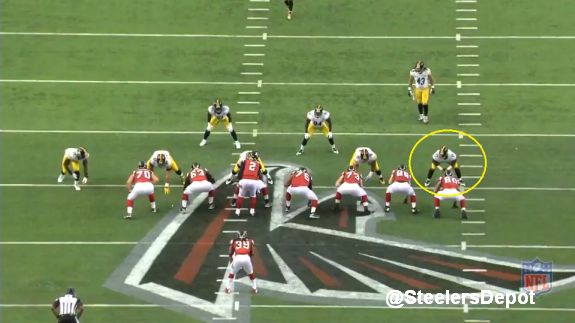 As Troy Polamalu walks into the box, Worilds steps to the outside to definitively become the force player, spilling any outside run back to Polamalu and the rest of his help. 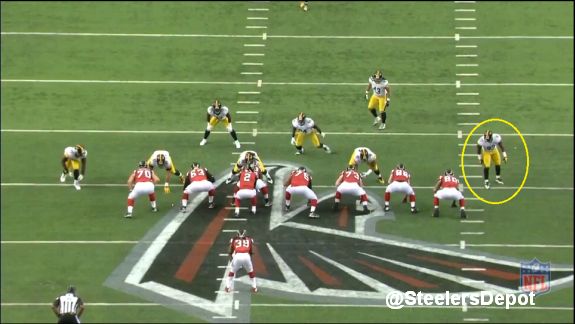 Wide receiver Eric Weems motions tight to the formation, Worilds again steps back down with a slight outside shade to the tight end. 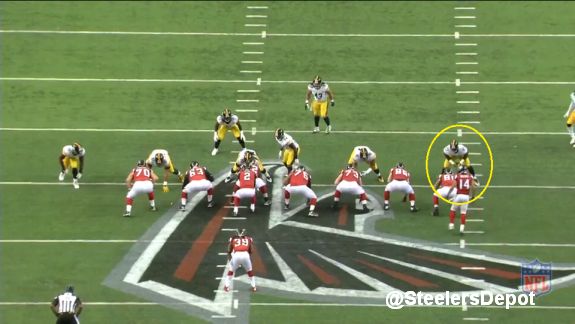 All that shifting down seamlessly within a few seconds. Simple for a veteran but easy for a rookie to make mistakes.

Our final example comes with Worilds back at inside linebacker. We’ve seen him blitz but the New Orleans Saints run inside zone to his side. He has to take on the block of the guard, shed, and make the tackle. 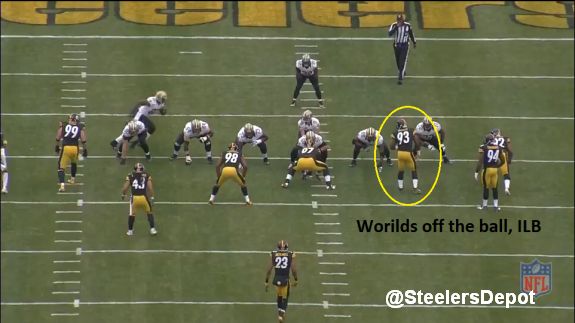 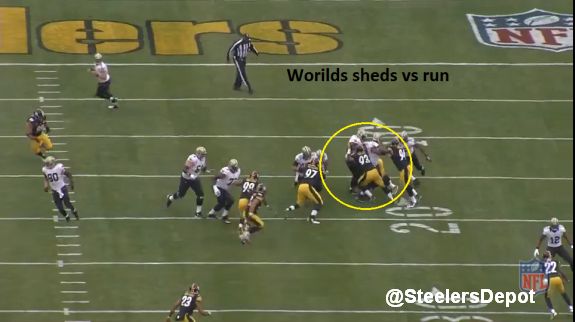 Another example from the Saints game with Worilds back at ILB. He has to read his run/pass keys, and then takes the back to the flat as he leaks out onto his route. 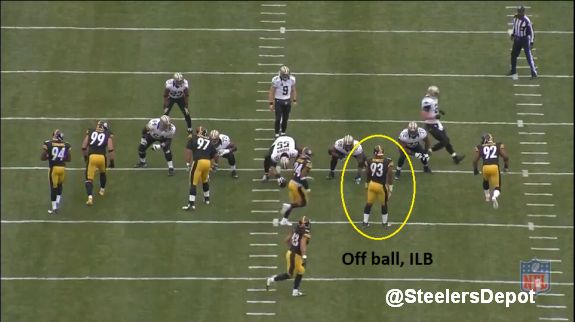 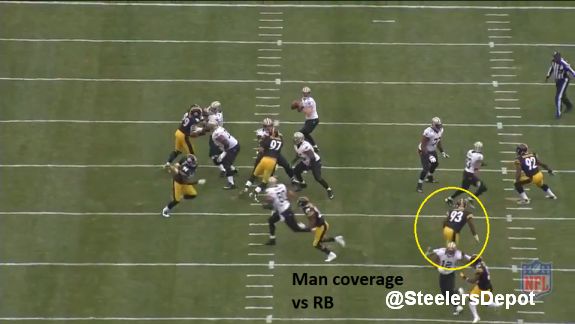 One last look from the same game. Here is Worilds removed from the formation to cover Jimmy Graham in the slot. The Steelers will face a similar tight end Week One in Rob Gronkowski. 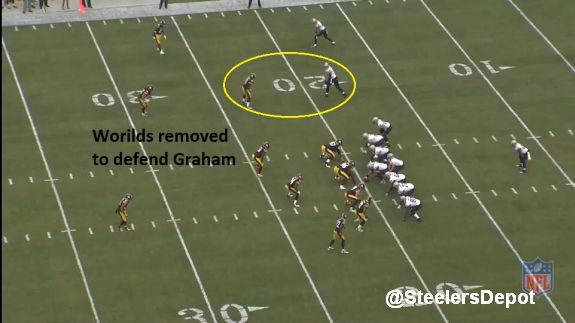 I’m not trying to make this overly complicated by getting into crazy X’s and O’s. But we’ve illustrated a variety of assignments without even mentioning pressuring the QB off the edge. Shifting vs fronts and motions, dropping into coverage, playing all over the field while defending every play imagineable from foreign territory all puts a strain on any linebacker, much less a rookie.

Dupree’s experience playing with his hand up and being used in some advanced concepts will accelerate his progress but by no means does it eliminate it. The level of detail and consistency, especially now that he has a coach whose sole job is to evaluate the outside linebackers, will be new to him and there will be an adjustment period. That only comes with time.