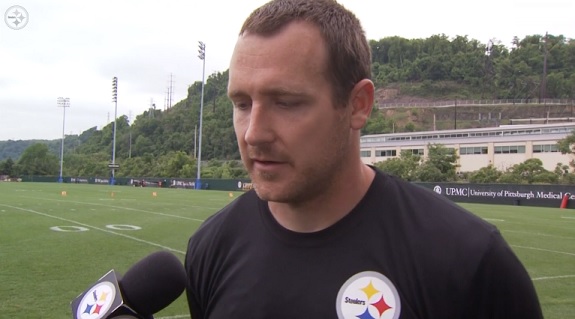 Pittsburgh Steelers tight end Heath Miller is entering his 11th season in the league and while he might not be the same player he once was when he was drafted in the first-round of the 2005 NFL Draft out of Virginia, it doesn’t sound like he’s even close to thinking about retiring.

“I just try to approach each year in and of itself and not try to think about the future,” said Miller, who caught 66 passes for 761 yards and three touchdowns last season. “I’m focused on this year and I guess when the time is right maybe I’ll know, but right now I’m all in for this year.”

While Miller is obviously all in for the 2015 season, he did somewhat admit to now having to monitor his offseason work more closely than he used to as to not to overdo things prior to the team reporting to Latrobe for training camp.

“Well, I think every year I try to be better with my training and recently it’s been maybe gearing back and working smart, and trying to be efficient when I do work,” said Miller. “But I think coach takes care of me a little bit during these things (OTAs), but it’s still fun to get out and see what kind of shape you’re in and kind of gauge yourself before training camp.”

Miller also talked a little about how his long career has included adjustments that have allowed him to play so many years in the league in addition to remaining productive even though some of his skills have diminished along the way.

“Well I think, obviously, physically you’re at your peak when you’re young but mentally you’re not where you are, or I am, at this point, so I think it kind of evens itself out,” said Miller. “I think I’ve probably seen all the looks that I can see, been all types of situations, so there’s a comfort level in knowing that and recognizing things, and having a feel for what’s about to happen before it happens.”

The Steelers recently drafted Penn State tight end Jesse James in the fifth-round of the 2015 NFL Draft and he figures to now compete against last year’s seventh round draft pick, tight end Rob Blamchflower, for a spot on team’s 53 man roster. Regardless of whichever player wins that spot, neither are expected to eat considerably into the playing time of either Miller or backup Matt Spaeth in 2015 barring injury.

“I see a lot of guys who have looked good so far,” said Miller of the inexperienced Steelers tight ends currently on the roster.

The 2015 Steelers offense is loaded with talent and with that comes high expectations. Miller was asked if he’s ever been part of unit with so much potential and he smartly downplayed the question.

“There’s a lot of talent for sure. said Miller. “We just got to put together and be on the same page, and play for each other.”

Miller is under contract with the Steelers through the 2016 season and there’s no reason to think that he can’t come close to having another season similar to the one he had last year as long as he keeps himself healthy. He is a consummate professional who knows what his role with the team is. He’ll also be a great mentor for James, who many hope will be able take over wherever Miller leaves off at.