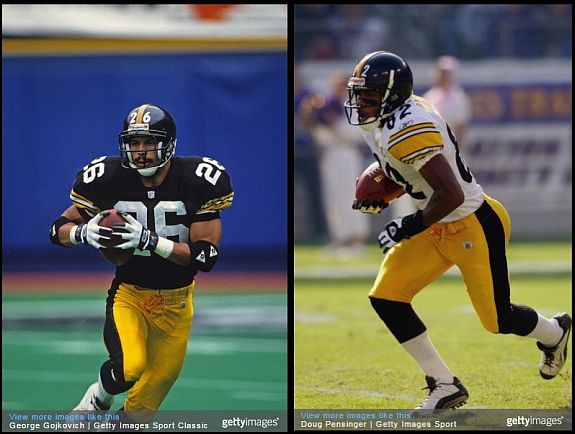 Cornerback Rod Woodson and wide receiver Antwaan Randle-El are the two former Steelers players who made the ballot this year.

Woodson, who was drafted by the Steelers in the first-round of the 1987 NFL Draft, was a 1986 consensus First Team All-American and runner-up for the Jim Thorpe Award while at Purdue. He was a three-time First Team All-Big Ten performer who returned three interceptions for touchdowns in career. He started 45 games during his college career and left Purdue as career leader in solo tackles (320) and interceptions (11) among others.

In 2009, Woodson was elected to the Pro Football Hall of Fame in his first year of eligibility after playing 17 seasons in the NFL of which ten of those he spent playing for the Steelers.

Randle-El was drafted by the Steelers in the second-round of the 2002 NFL Draft out of Indiana. The former college quarterback turned NFL wide receiver was a 2001 First Team consensus All-American and the first player in FBS history to pass for 6,000 yards and rush for 3,000 yards in career. He also rushed for more yards than any quarterback in FBS history upon the conclusion of his career at Indiana.

During his nine seasons in the NFL, Randle-El caught 370 passes for 4,467 yards and 15 touchdowns. He played a total of five seasons in Pittsburgh and another four with the Washington Redskins. He also was a member of the Steelers team that won Super Bowl XL. In that game he threw a touchdown pass to Hines Ward and currently remains the only NFL wide receiver to accomplish that feat in a Super Bowl.

After the voting has ended, the announcement of the 2016 Class will be made Friday, Jan. 8, 2016, in Scottsdale, Ariz., in conjunction with the College Football Playoff National Championship Weekend.)