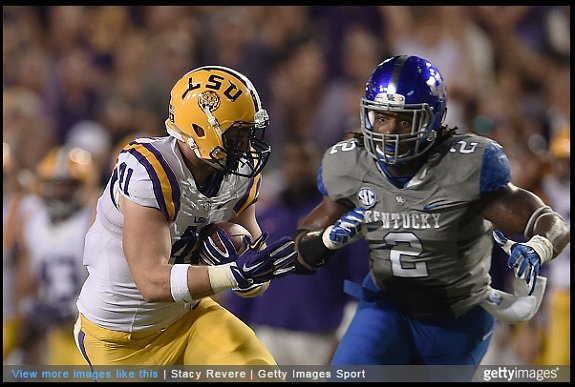 Like Mike Tomlin and Kevin Colbert admitted they felt, I am pleasantly surprised to see linebacker Bud Dupree fall to the Pittsburgh Steelers at 22. Truthfully, I thought it had no chance of happening. But that’s why you build your board.

Dupree was always the player I wanted the team to go after. Nearly from the beginning. I wrote up his scouting report on January 19th, very early in our process. I’ve said recently that if Dupree was there, I’d sprint to the podium and take him. As noted in my last Chalk Talk, he was the only player I’d even consider trading up for.

The draft board broke well for the team. As the Steelers’ pick neared, I narrowed my board down to four players. Dupree, Byron Jones, Landon Collins, and Eddie Goldman. Made the pick easy. Set the board, let things play out, and take the top player.

You’ve probably read his scouting report by now. My feelings haven’t changed so there’s no need to delve into it all over again.

Upfront, I do love the pick, but I recognize he isn’t a slam-dunk, finished product. He has his flaws. In my scouting report, the first thing I spoke about was a level of inconsistency on his tape, but there are so many positives.

He’s a freak athlete for 269 pounds. Runs a 4.56 and jumps 42 inches in the vertical. The latter figure was bettered by only one cornerback at the Combine.

Explosive first step. When using them, strong, active hands with an impactful punch on contact. Shows counters even if it needs to be developed more like the majority of college pass rushers. Athlete who can chase plays down. Capable of sealing the edge. Productive despite not always receiving opportunities to rush.

What makes him even more unique is that use. Ample time with his hand up. Played all over Kentucky’s defense like a true Steelers outside linebacker. It makes the projection, normally difficult, easier. And when you factor in quality, SEC competition, it only lessens that projections. Doesn’t completely eliminate it, but eases the burden.

We’re not talking about a Sun Belt kid who never played with his hand up. That’s extremely appealing.

To go one step further in order to identify his versatility, I broke down four games of Dupree. Charted where he lined up each snap and if he dropped into coverage. The results, categorized if it was a run or pass, is shown below.

Looking at the total further, Dupree lined up at outside linebacker on 107 passes. He dropped on 27, or 25.2%. Fair to say that percentage is higher than most and similar to what Steelers like Jason Worilds were asked to do.

You don’t have to think too hard to wonder why this pick made sense. Freak athlete for his weight while being uniquely used in the Wildcats’ system in a way the Steelers will use him. Prospect who fills a need and is the most valuable on its defense. It’s a no-brainer pick.