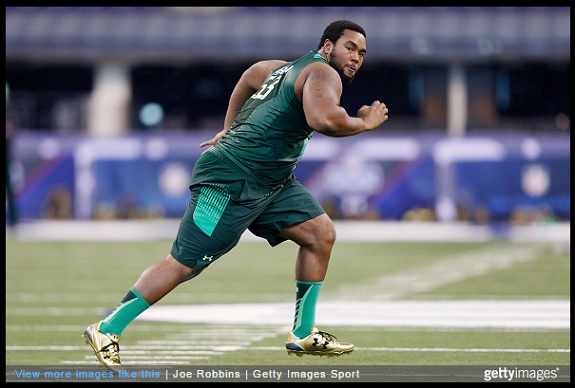 When the Pittsburgh Steelers’s natural sixth-round draft pick came on the clock, I don’t suspect that the name Leterrious “L.T.” Walton was on the tip of many people’s tongue. He’s not a player that I was previously familiar with, even if I had the sixth round pegged as an area to possibly address the defensive line depth chart.

But, as I suspect is the case for many today, the more I learn about the player, the more I find that I like. For one thing, he is a player that has shown to get better over time as a college interior defensive who was an offensive line conversion.

When you get a player who switches positions in college, you have to account for the transition. Pitt offensive tackle T.J. Clemmings, for example, took time to convert, and he is still settling down as an offensive player.

But what I like most about the Steelers choosing Walton is that he fits the profile that they acknowledged post-draft that they were targeting along the defensive line.

After the selection, defensive line coach John Mitchell was asked if the Steelers’ draft philosophy was influenced the proliferation of the usage of their nickel defense, which employs a four-man rush, to which he responded in the affirmative.

And though at 6’5” Walton projects as a base 3-4 five-tech at defensive end, he has the heft at 320 lbs. to be an interior pass rusher when the nose tackle comes off the field. In his post-draft press conference, general manager Kevin Colbert even went out of his way to expressly state that “his best pass rush is on the inside, more than the outside”.

Mitchell knows that he has a raw ball of clay to mold, but, as is often the case in the profile of player selected in the last two rounds along the defensive line, the Steelers have taken an athlete with the building blocks of height and weight with the ability to stay on his feet.

As a former three-sport athlete, including baseball and basketball, Walton has developed naturally good hand- and footwork, but Mitchell will now have to break it down and translate it into what he needs from him as a 3-4 defensive end, and that can often take time, as we have seen over the years.

The Steelers have been generous in the last two rounds to Mitchell, allowing him to single out prospects that he wants to work with, from Doug Worthington and Ra’Shon Harris to Nick Williams and Daniel McCullers. Of course, by the list of names it’s evident that it doesn’t always work out in the end.

It’s far too early to say what path will be Walton’s to tread. The Steelers have returned all six defensive linemen from last year’s end of season roster, and one figures that he will have to knock one off the list to make the final 53-man roster.

In order to do so, he will have to show not only to be a quick learner, but that he has the scheme versatility to play the five-tech in the base as well as a penetrating two- and three-tech in sub-packages as a defensive tackle.