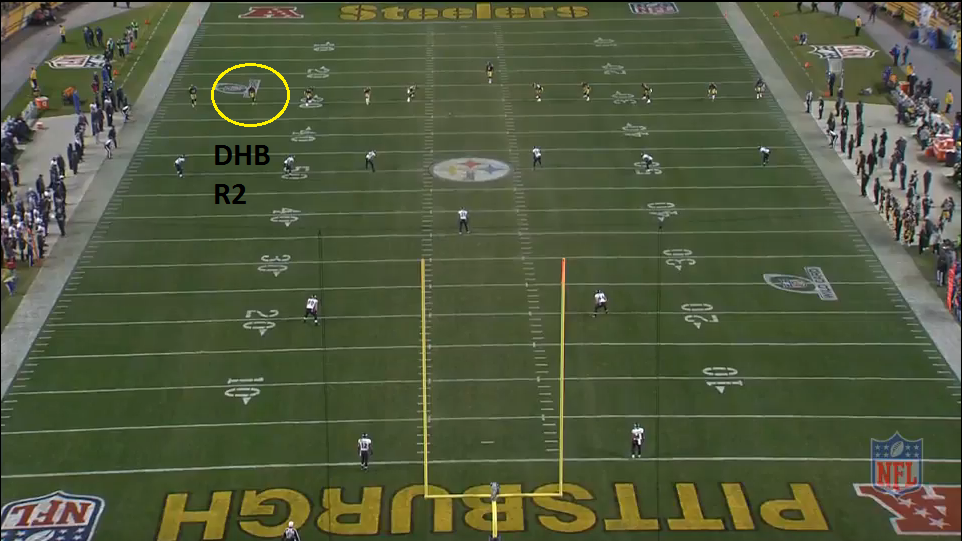 We’re going off the beaten path for today’s All-22. Today, we’re going to break down my favorite group of guys: the special teamers. And why it’s important to have a couple good ones even if they don’t offer much on any other side of the ball.

The language won’t be as technical and we’ll late the tape do the talking. The focus will center on the value Darrius Heyward-Bey brought to the Pittsburgh Steelers in 2014.

In my recent breakdowns, I’ve been trying to include quotes from coaches who are infinitely smarter than I. Bobby April has worked in the NFL since 1991, currently serving as New York Jets special team’s coach.

In a 2013 interview with XandOLabs.com, April gave some insight into what he looks for in his kick coverage unit.

“To me, it’s very similar to playing defense.  If there is a lot of space between you and the ball carrier, you’re treating that blocker the same way a pass rusher would treat an offensive lineman.  You’re pass rushing that guy, you’re not fitting your hands on him.  The only time we fit our hands is if we’re going to knock him vertically back which would end with a pass rush move.”

In other words, a free defender is a happy defender. Get locked up and you take yourself out of the play.

Heyward-Bey is lined up at R2 in the below pictures. Meaning, he is the second closest player from the sideline to the right side. R5 through R1 on the right, L5 through L1 on the left. Every team coaches it up differently but the way I’ve always learned it, R2 and L2 are the “pinch” players responsible for squeezing the return man and funneling plays inside.

Flipped through some old playbooks and the 1999 Tampa Bay Buccaneers illustrates it well. 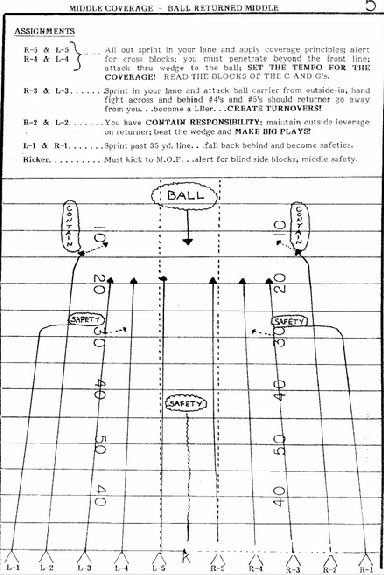 You can see the role as the pinch from R2 and L2. And in the caption above, describing their assignment it reads: “You have CONTAIN RESPONSIBILITY; maintain outside leverage on returner; beat wedge and MAKE BIG PLAYS!”

We’re going to see two instances of that below.

Starting in the playoff game against the Baltimore Ravens and facing off against one of the most dangerous return men in the game, Jacoby Jones.

Heyward-Bey, as the R2, races downfield and is facing the blocking of one of the Ravens’ upmen. Remember what April said. Act like a pass rusher, stay clean, and work off the block. 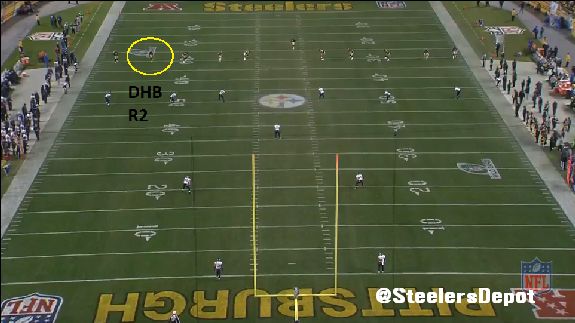 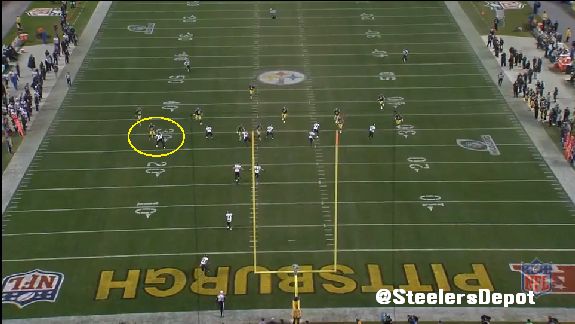 That’s what DHB does, getting around it almost instantly. And as you’ll see, Jones is already trying to work his way out on the edge. 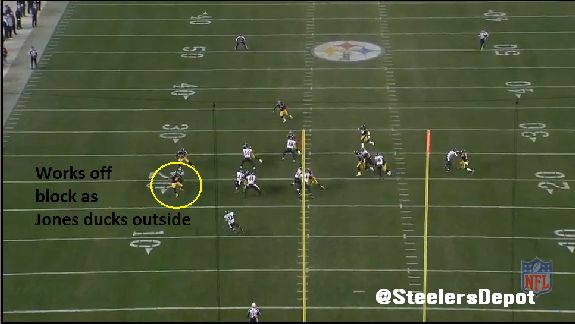 Because Heyward-Bey gets off the block, he’s able to essentially to act like an OLB on the edge and “spill” the runner back inside to your help. Maintain that outside leverage. Which is exactly what we end up seeing. Jones is forced inside. 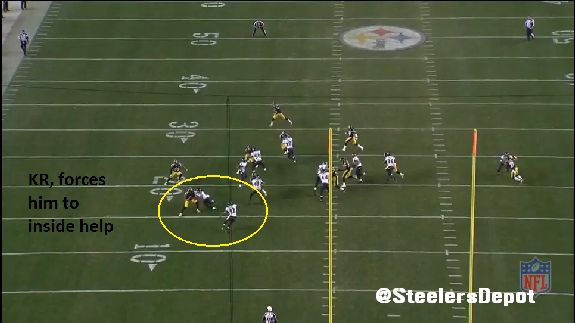 And then Heyward makes the play, the second part of the Buccaneers’ playbook assignment. And even if he hadn’t, look at all the bodies. Jones is swallowed up. 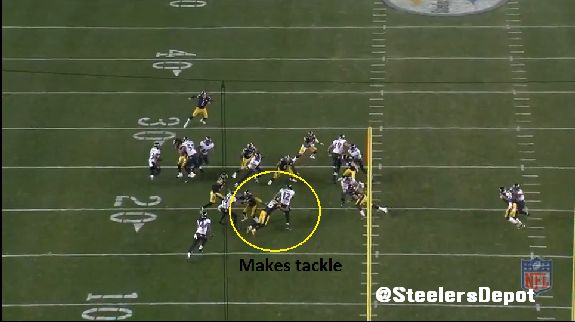 We’re going to see similar during the regular season versus the Kansas City Chiefs. Though DHB has to be one of the first players down to contain the play while everyone else is waiting to see how the blocking is set up, playing under control, it’s obvious to see how his wheels are an asset. First player down there by nearly five yards. 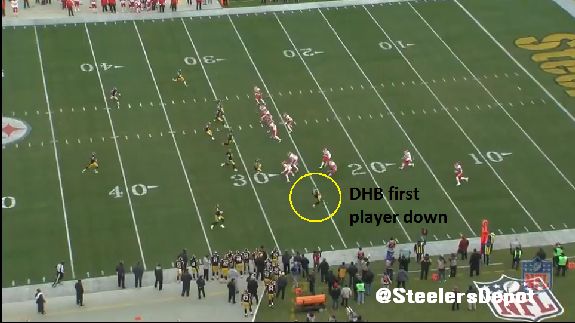 He’s screwing with the blocking patterns of the return team, forcing a double-team by the wedge. 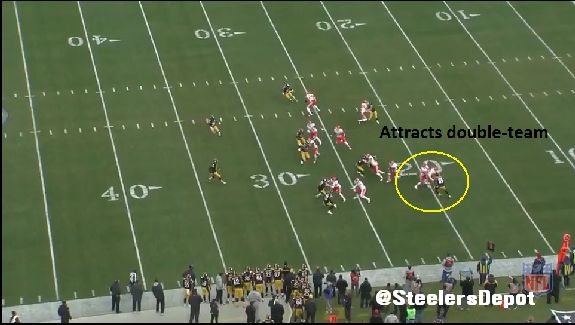 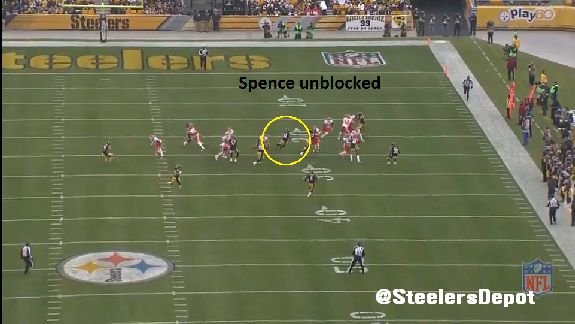 The last clip, also against the Chiefs, is all out hustle. Exemplifies the “MAKE BIG PLAYS!” motto we saw earlier. DHB runs this kick down all the way from the backside, coming across the field, to chip in on the tackle. Nothing fancy or technical here. Just a big-time hustle play. 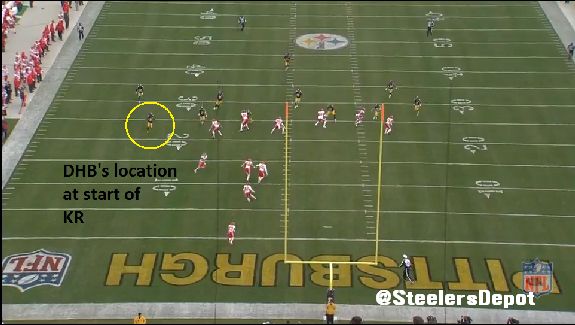 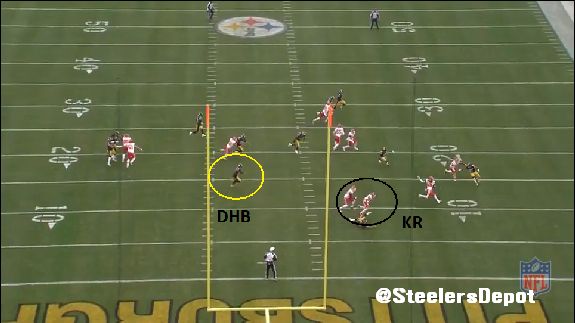 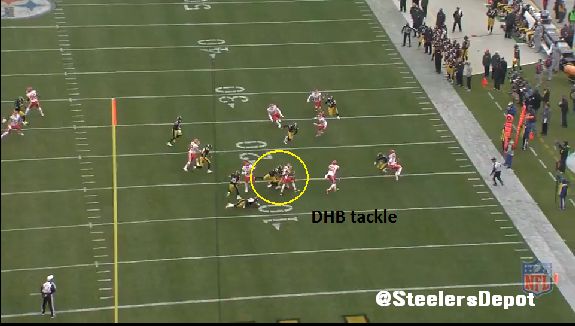 And I want to show the GIF to really show the closing speed to hustle.

Down the stretch, the Steelers held the likes of Pacman Jones (twice), De’Anthony Thomas, and Jacoby Jones in check on the return unit. One of the overlooked factors that put the team into the playoffs.

For some, it may seem frustrating and confusing why a player like him earned a roster spot out of camp last season. But it’s this hidden value that makes him an asset for Danny Smith, who has considerable pull in determining the final roster spots. And why you shouldn’t be surprised to see him back on the 2015 squad.