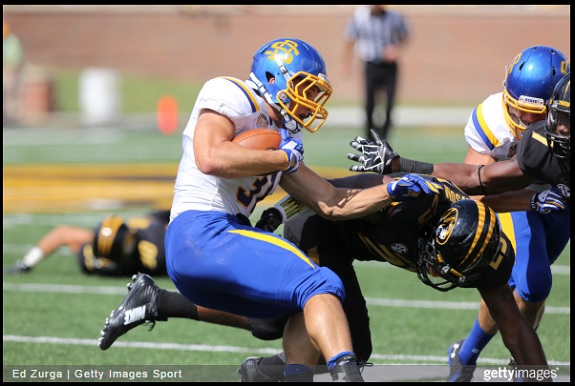 When talking about the most productive running backs in this year’s class, the top honor is undoubtedly Wisconsin’s Melvin Gordon, right? I mean, his 4,915 rushing yards over his four seasons in Madison has to take the cake, right? Wrong. From 2011 to 2014, South Dakota State running back Zach Zenner put up numbers usually seen on a Playstation, with a career rushing total of 6,548 yards. This includes three straight breathtaking years of 2,000-yard campaigns from ’12 to ’14, totaling 6,078 over that span. A 5-foot-11, 223-pound workhorse, he is exactly that, shouldering loads of 300, 351 and 337 carries over the last three seasons.

Although South Dakota State isn’t the SEC or the Big Ten, the Missouri Valley Football Conference’s all-time leading rusher saved some of his best performances for games versus bigger opponents. Facing Kansas in the 2012 opener, Zenner ripped off a 99-yard touchdown and finished with 183 yards on the ground. In ’13, he racked up 202 yards and two touchdowns on Nebraska, and just last season he plowed over a Missouri defense led by first-rounder Shane Ray, to the tune of 103 yards, including a 75-yard visit to pay dirt. So whenever people bring up the “small-school” card, just look at the 61 carries for 488 yards and 5 scores Zenner put on the “big boys.”

He finished second all-time in the FCS rushing annals, falling just 11 yards short of the mark. However, his 6,548 yards is still more than the FBS record of 6,397 held by Wisconsin’s Ron Dayne.

“Three straight 2,000-yard seasons in college. Every time I turn on tape and watch him, I like him more,” NFL Network’s Charles Davis said. “I know the easy comparison is going to be to Danny Woodhead after the big numbers he put up at Chadron State coming out of NAIA ball. This kid, I think he may be a little bit more like Antone Smith of the Atlanta Falcons.”

For a team like Pittsburgh searching for more depth in their running back platoon, Zenner would be a tremendous add late. He also possesses strong hands, corralling 95 passes for 909 yards in his career, a trait current Steelers star Le’Veon Bell is superb at.

All those mind-boggling numbers garnered an invite to participate in the East-West Shrine Game, where he continued to open eyes.

“Zenner goes hard on every snap and in every drill,” Davis said. “He kept making plays this week, whether it was catching the ball out of the backfield or running the ball on an inside drill. He’s not a big name, coming from South Dakota State, but I think a lot of teams will be intrigued by him.”

Clearly on the NFL radar, he was the first South Dakota State player to receive a nod to attend the NFL Combine since 1999, and he didn’t waste the opportunity. He ran a 4.6 in the 40 (the same as Bell did), posted the third-best vertical among running backs, at 41 inches, and recorded a strong showing on the bench with 25 reps. His 40 didn’t jump off the charts, but he has 16 carries of over 50 yards in college, which should help quell any questions about his speed.

After the combine, Zenner was happy to just have a break and return home.

“Sure, it was nice to travel the country and sleep in hotel beds for eight or 10 weeks, but there’s no beating the comfort of your own bed in your own room, so it was a welcome feeling to return to my old house with my old roommates and live my old life or something close to it for a few days after the Combine,” he said.

A two-time consensus All-American and two-time finalist for the Walter Payton Award given to the top player in the FCS, Zenner knows hailing from a small-school only means he’ll have to work twice as hard as someone drafted in the first round from a football powerhouse like USC or Alabama. Greg Gabriel, a former NFL scout and current analyst for the National Football Post, thinks Zenner’s talents belong on an NFL roster, even potentially starter-worthy.

“While he will need some development time coming from the FCS level of competition, he has the traits to be an eventual starter in the league,” he said. “He is a very solid mid round pick.”

There has been mentioned the possibility of moving him to fullback, as it often exists a certain stigma in many circles regarding white running backs, labeling them as a fullback. Although not his preference, Zenner will play wherever he’s asked, whether it’s first-string or gunner on special teams.

“While I’d obviously prefer to stay in my comfort zone, my mentality from the outset has been that I’ll play anything anyone wants me to play, and if a team wants me to play a position badly enough and they obviously think that I can do it, then I’m going to go out and do the best that I can for them at that position, whether it’s at running back, fullback or any spot on a special teams unit,” Zenner said.

In regards to fullback, he doesn’t have much experience there, but is trusting of a coaching staff envisioning him having success there. Peyton Hillis started his career at fullback before showing the athleticism to be a feature back, and Danny Woodhead and John Kuhn all show the versatility to not only block but be the main ball carrier in a pinch.

“I’ve only played running back, so I don’t have a ton of experience at that particular spot — I blocked on a handful of plays early in my career at South Dakota State, but that’s the extent of it — and I’d have to put on weight and bulk up to shift into that role, another thing I’ve never really had to do, but at the end of the day, teams know who I am and what I’ve done, so if they’re confident I can play the position at a high level, then I am, too,” Zenner said.

At this point with a little less than a month to go until the draft, Zenner is just soaking in every moment until draft day. With star runner Bell facing a suspension to begin the year, and DeAngelo Williams the only real proven commodity at running back behind him, the Steelers would be wise to use a late round pick on a running back. Some of the naysayers will say Zenner had too many carries in college so the wear and tear already exists, but the team already has their feature runner. Plus, Williams turns 32 later this month, and can’t play forever.

Zenner would be a great selection or priority free agent, and early on could be a special teams demon for coach Danny Smith. For now, he’s just going to control what he can, and let the cards fall as they may.

“At this point, we’re inside a month until draft day, and I can’t believe how close I’m getting to hopefully accomplishing my goal,” he said. “In the meantime, I’ll continue to work out as the big day draws closer, focusing a little more on conditioning than I have in the last several weeks, and before I know it, I’ll be back home in Minnesota waiting for my name to be called.”