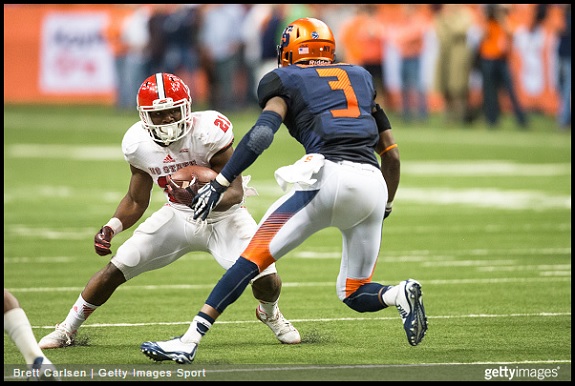 The University of Syracuse held their Pro Day on Tuesday and according to Jacob Klinger of Pennlive.com, Pittsburgh Steelers college scout Dave Petett was on hand to observe it.

Durell Eskridge, a 6-3, 208-pound safety, was reportedly the big draw Tuesday and according to Bryan Fischer of NFL.com, he had a good showing during his position drills and even lowered his 40-yard-dash time that he ran at the 2015 NFL Scouting Combine.

Klinger also reports that Eskridge said after his workout that he thought he had a received a voicemail from Steelers defensive backs coach Carnell Lake.

Eskridge noted during interviews that he follows his former teammate, Steelers safety Shamarko Thomas, closely and additionally commented on how he likes the way Pittsburgh uses their defensive backs.

Eskridge, who declared for the 2015 NFL Draft as an underclassman in January, recorded 68 total tackles and one interception last season. He also was credited with three pass breakups in 2014. In 2013, the free safety led the team in total tackles with 78 and interceptions with four.

Several draftniks believe that Eskridge might be drafted as early as the fourth or fifth round. The Steelers might be in the market for a developmental free safety on draft day and they probably have a lot of first-hand information already compiled on Eskridge being as he played a few seasons with Thomas. It will be interesting to see if he’s brought in for a pre draft visit over the course of the next few weeks.