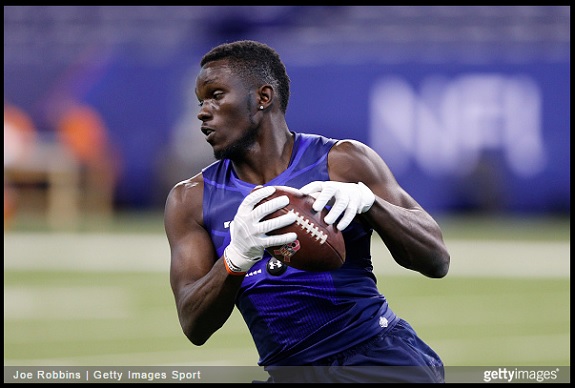 In a draft class considered weak for the position, UMass tight end Jean Sifrin offers an athletic package of size and leaping ability as a former high school basketball player. He also offers something even more unique, as a 27-year old looking to make the jump from one year of collegiate football to the big league.

“The biggest question with prospects is longevity of a career-how long do you think he can play effectively?” says Texans general manager Rick Smith. “So yes, age is a factor. How big? That depends.”

At Miami’s Norland High School, where he was a teammate of  Pittsburgh Steelers All-Pro wide receiver Antonio Brown, he made every team he tried out for, whether it be football, basketball, wrestling or baseball, but laziness in the classroom often made him ineligible. His closest friends would rather smoke pot and play video games than attend school. He had a handful of part-time jobs, one of which was at age 15 at a car wash. He figured he could make more money by bypassing school altogether, so he did and while Brown was getting his diploma in 2005, Sifrin dropped out.

Eventually, he worked toward attaining his GED a few months later, and then got a face slap from reality when he found out he would soon have to support his pregnant girlfriend and their unborn child. His part-time jobs weren’t making ends meet, so a recruiting agency got him a warehouse gig. The work was very taxing, as evidenced by the two herniated discs he suffered, but the pay was great. Soon, Sifrin found himself engulfed in his job, sometimes working 6 days a week, at 12 hours per shift. He eventually grew away from his girlfriend, and they went their separate ways. For the first time in his life, he felt like he could go down one of two paths.

“I told myself, the next opportunity I get, I’m taking it. No matter what it is.”

As luck would have it, Sifrin was playing in a flag football tournament when his athletic prowess caught the eye of Pete Monzon, an assistant coach at ASA Junior College in Brooklyn, NY. He scored a partial scholarship, left his son, Jabari, with his mother, and for the first time in his life, had a set schedule. The 5 a.m. workouts, game film sessions and study halls were all so new to him, but he again found himself hanging with the wrong crowd.

Upon returning to a pungent odor of marijuana in his dorm room one day, campus police had been notified and the blame fell on Sifrin’s massive shoulders. He pleaded the ASA dean to administer a drug test, but they refused, and he was subsequently booted from the team. His next stop would be El Camino College in California. Now at the age of 24 after sitting out a year due to credit transfer issues, he soaked up the playbook, and immediately saw the field, constantly flashing his talents and drawing consistent double teams.

His play caught the eyes of powerhouse programs like Oklahoma and USC, with Sifrin even giving a verbal to the Sooners. It was not to be, as Sifrin had a friend do an essay for him for his English literature class. Easy A right? His friend plagiarized the whole thing, he was caught and Oklahoma pulled the plug on it’s offer.

The new University of Massachusetts head coach Mark Whipple, former Steelers quarterbacks coach, was assembling his staff at the school, and was lagging a bit on the recruiting trail. They gave Sifrin a shot, knowing he wouldn’t be eligible right away, and he was onto his fourth state in four years. After jumping through various NCAA hoops just to be a part of the team, he was cleared to play, and from the very beginning his immense talents were apparent.

Knowing how far behind he was, the coaches wrote up about 10 plays for him since he wasn’t able to immerse himself in the playbook, per NCAA regulations.

“They were all pretty simple, and specific situations,” Spencer Whipple, the tight ends coach, said. “One-on-one scenarios with defenders, things where we could put him in a position to do well.”

In his debut versus Colorado, Sifrin corralled 4 catches for 40 yards and 2 scores, one of which would do Odell Beckham Jr.‘s circus catch proud. At season’s end, he would have 41 catches for 637 yards and 6 touchdowns, all top-10 rankings for tight ends. With interest from the NFL, coupled with his age, it was off he went yet again.

“He’s just so raw, and there’s not much tape to grade,” an NFC scout said. “But he probably has the highest athletic ceiling that I’ve seen.”

But the one number that sticks out more than any other is his age when the NFL season kicks off, at 27. Sifrin met with five teams at the combine, one of which was the Steelers. He said instead of answering weird questions about his girlfriend or sexuality, he was just asked to tell his side of the journey to how he got where he is today.

There are obvious ties to the team, with Whipple, so we can connect the dots there. There’s also the added bonus of an old friend in Brown the team can rely on for intel.

Don’t think these things carry any weight? Look at the recent signing of running back DeAngelo Williams. His former offensive coordinator at Memphis was none other than Randy Fichtner, the current Steelers quarterbacks coach, so there was likely some dialect there behind closed doors.

“Mark Whipple did a great job with Sifrin and let him just go out and make plays rather than get bogged down with the X’s and O’s,” said an AFC scout. “His age hurts him because of how far behind he already is, but he’s talented.”

The talent is clear, but his age may be a detriment, considering the Steelers usually steer away from older players.

If he was five years younger, we may be looking at a first-round pick but that’s just not the case. I mean, his teammates at UMass referred to him as “Uncle.” Still, he would add a large, athletic target for Ben Roethlisberger to hurl passes at, and that’s another way one can look at it-how much longer is the window going to stay open with Roethlisberger at the helm? Surrounding him in the present with as many weapons as possible gives the team the best chance at another Super Bowl, another reason why the team is showing such interest in Louisville’s stud wideout DeVante Parker. Adding an underrated specimen like Sifrin in the receiving game could be just what this offense needs to put it over the top.