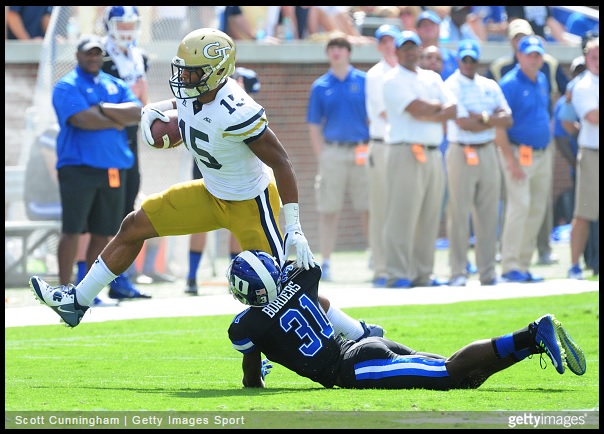 Sometimes life has a different path than the one we preconceive for ourselves. Professional athletes aren’t found around every corner, and even more rare are those with the capabilities of excelling in multiple professional sports, like Bo Jackson and Deion Sanders did, juggling their NFL and MLB careers. For former Georgia Tech wide receiver, and 2015 NFL Draft hopeful DeAndre Smelter, such is the case, except that football wasn’t his first true love, baseball was. And he was damn good at it.

“Coming out of high school, I was dead set on baseball being my ticket,” Smelter said.

Yesterday, Alex Kozora did a draft profile on Smelter, but his backstory is something in and of itself. Just a few short years ago, at Tatnall Square Academy, Smelter was considered the cream of the crop when it came to the nation’s finest pitchers. He sported a 95 mph fastball, he led the high school to back-to-back state championships in 2008 and 2009, hell he even already had renowned agent Scott Boras ready to represent him. He was taken in the 14th round of the MLB Draft by the Minnesota Twins in 2010, but signed with Georgia Tech instead, planning to command a hefty signing bonus after his junior year. However, reoccurring shoulder pains continued to haunt him, to the point he even sat out the 2012 season. He rehabbed to the point of exhaustion, but to no avail, and he knew the writing was on the wall, and his career was over.

Coincidentally enough, GT head football coach Paul Johnson recruited Smelter as a defensive back coming out of high school, and after sitting down with him, he was still interested, only this time as a receiver.

“When he decided to make the transition to football, we talked about it, and I told him I just wanted him to be happy,” his mother, Cora Smelter, said.

He had to work for everything he got though, submerging himself in the playbook and putting in extra reps after practice.

“I didn’t know what he could do initially, but he had some ability,” GT receivers coach Al Preston said. “He never talked about what he wanted to do, he just came to work.”

He got his foot in the door for playing time as a junior, and recorded 21 grabs for 345 yards and 4 touchdowns. Still, back to the drawing board Smelter went, and he became best friends with the JUGS ball machines after practices, often by himself.

“It’s a process, but he’s going to play and help us. He keeps making plays,” head coach Johnson said.

When new starting quarterback Justin Thomas was given the reigns, Smelter would call him often, looking to hit the practice fields for as many reps as possible, and the behind the scenes work was no more evident than this past fall. At one point, he was on the receiving end of 43 percent of the team’s pass attempts-second in the nation behind arguably the most polished receiver in this year’s draft, Amari Cooper of Alabama. He grabbed 35 passes for 715 yards and 7 scores en route to All-ACC second team honors, but tragedy struck again in one of the last games of the season, as Smelter suffered a torn ACL, ending his season.

Again, rehabbing is key, but his timetable for a return is murky at best.

“DeAndre tries not to let anything get in his way,” his mother said. “He picks himself and goes forward to what he needs to do.”

He offers an intriguing package to a receiver-needy team that’s willing to gamble on him. The Pittsburgh Steelers are set at their top three spots, and depth is always a good thing to have, especially with last year’s #4 Darrius Heyward-Bey not a sure thing to be re-signed. The 6-foot-2, 226-pound Smelter is exactly that, a bigger receiver who almost has the stocky build of a running back, and also has the mean streak and physicality to match his size. He’s also dangerous post-catch and uses his physical nature and strong hands to win when boxing out smaller corners or on jump balls. In a way, he sounds like a jumbo version of former Steelers legend Hines Ward, and it doesn’t hurt that blocking is a forte of Smelter as well. Despite only two years of college football, he shows a maturity beyond his years.

“I hate that he tore his ACL,” says one NFC area scout. “We throw the phrase “athlete” and “competitor” around quite a bit in this business, but he embodies that. If he hadn’t had a shoulder problem, I think we would be talking about him as a major leaguer right now.”

Despite their well documented issues in the secondary and at outside linebacker, the Steelers could use some receiver depth, although their top three are set with All-World Antonio Brown, lanky deep threat Martavis Bryant and slot receiver Markus Wheaton. Behind them is anyone’s guess, and the team will likely go back to their recent calling card on taking a flier on a late round receiver, in hopes of unearthing another steal. With his injury so late in the season, Smelter may not be ready for training camp or even the regular season, but with such a promising group in front of him, immediate playing time wouldn’t be necessary.

While once an afterthought to baseball, his focus is now 100 percent on not only making an NFL roster, but contributing.

“Out of high school, my mindset was baseball – that’s all I really wanted to do,” he said. “I was trying to make a decision that was best for me and my family … but this is a chance for me to come out here and do something. I really didn’t want to go through college having any regrets saying I should have done this or that. I had a second chance to do something I really love and took advantage of it.”