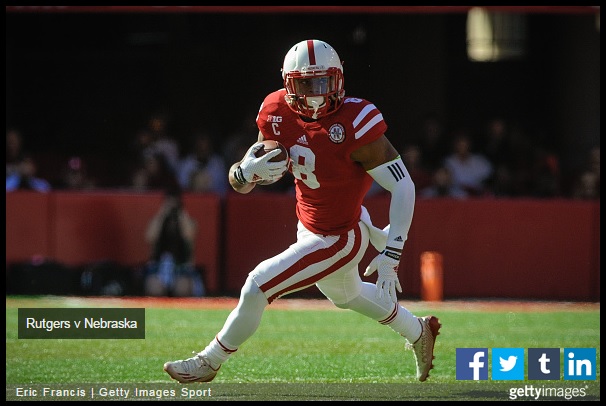 When it comes to the football, especially at the NFL level, talent oftentimes triumphs over heart. But University of Nebraska running back Ameer Abdullah possesses both of those traits, despite his small frame. As the youngest of nine kids in a Muslim home in Birmingham, Ala., he can be looked at as the runt of the litter, but that’s definitely not the case.

“My parents did a great job of raising the first third of the Abdullahs, and those three were great influences on everyone else,” he said. “By the time it got to the seventh, eighth and ninth child — the last batch — they just let us absorb and become sponges of our older siblings and absorb our good habits from them, let us learn the hard way and also let us benefit from what they’d already been through.”

He also notes the success of his family as well, with his siblings having professions like lawyers, accountants and a CNN producer, to name a few.

“I was raised in a tradition of education,” he said. “It’s out of the norm if you don’t achieve academically. Before any of us could go outside and play, homework had to be done, chores had to be done.”

It’s his own diversity that’s setting himself apart from the rest though.

“Everyone in my family played a sport, either collegiately or high school,” he said. But he’s the very first to have a crack at breaking into a sport professionally.

After three consecutive 1,000-yard rushing seasons at Nebraska, including 1,611 rushing yards and 19 touchdowns his senior year, Abdullah looks to catapult his success into the NFL. One hurdle in the way for Abdullah is his size, where he’s listed at 5-foot-9 and 205 pounds, relatively small by NFL standards. Think Andre Ellington or Gio Bernard. But in Abdullah’s opinion, size doesn’t matter.

This is definitely true of Abdullah, as he consistently runs behind his pads, and exhibits a strong lower body to run through arm tackles. Look no further than him being voted “Lifter of the Year” by his teammates the past two season, after sporting a 365-pound bench press and 580-pound squat. This all after showing up as a freshman a couple sandwiches shy of 180 pounds. He is no stranger to being second-guessed and it’s a trait that should make him successful at the next level, because he works for all he’s got.

“In high school, a lot of guys said I was too small,” he said. “Then I went up to Nebraska and competed with running backs who were highly recruited over me. A lot of guys thought, ‘Oh, there’s no way he’s going to be productive at 5-9, 180,’ my sophomore year. I put on weight, got up to 200 pounds and put together three 1,000-yard seasons in a row.”

He also gained an invite to the Senior Bowl and what did he do with it? Only won MVP honors.

After an invite to the combine, he hoisted 24 reps on the bench, an explosive 42 and-a-half inch vertical jump and a decent 4.6 in the 40. He lacks top-end speed and won’t reincarnate visions of Willie Parker, but it’s noteworthy our very own Le’Veon Bell posted a 4.6 40 at the combine and we’ve all seen how that’s playing out.

There are a few things that should add some appeal to the Pittsburgh Steelers’ front office regarding Abdullah. One is his durability, as he was the Cornhuskers’ workhorse over the last few years, running with a low center of gravity, and not allowing defenders to get clear hits on him. This is also an attribute of Bell, and will be especially important with his suspension looming. He also can be a weapon in the passing game, having not dropped a pass in two years. Then you have his off-the-field intangibles.

“He has the highest overall character grade I’ve ever given to a prospect, and includes both football character and off-the-field,” said an AFC North scout. “Aside from Melvin Gordon and Todd Gurley, I think he’s the third best running back in this draft.”

A fan of Warrick Dunn, he relates his explosive style of play to the former Tampa Bay Buccaneer.

“I was No. 1 in four out of seven drills among running backs at the combine — vertical jump, broad jump, three-cone and 20-yard shuttle — but I’m going to go for a faster time in the 40-yard dash at my pro day just to help me sleep a little easier,” he said.

If he does well enough, he may be out of the Steelers’ range, as he’s likely to go somewhere in the second or third round. With their needs on defense, taking a running back that high is somewhat of a luxury. But wherever he goes, he knows his family will have his back no matter what.

“I let my siblings brag for me,” he said. “I know they’ll let people know I proved ’em wrong. But I know they’re proud of me. They’re happy for me no matter if I play one year in the NFL or 11.”