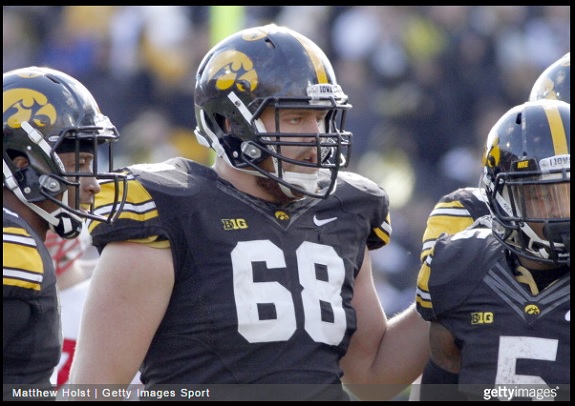 Since 2003, more offensive linemen from Iowa have been drafted than from any other school, 13 to be exact, and there’s another first rounder, perhaps top 15 pick, in this year’s draft. If he happens to be on the board come time for the Pittsburgh Steelers pick in the first round, they will be very hard-pressed to pass on him.

The very first time anyone from the University of Iowa saw Brandon Scherff was at the Iowa high school state track championships in 2008. At the time only a sophomore, it looked as if he’d settle for second in the shot put, but on his final heave, stole the gold medal.

“It wasn’t technique,” Iowa assistant coach Reese Morgan recalls. “It was kind of his will, and his competitive spirit, and his power.”

Scherff grew up in Denison, a small farm town of about 8,000, and growing up he was head and shoulders above his classmates. As a high school freshman, he played football, basketball, tennis, track & field and baseball, and when Iowa began recruiting him his sophomore year, he wasn’t even a lineman-he was the school’s 270-pound starting quarterback. He earned the nickname “Paul Bunyan” and it was quite fitting, considering he’d work over Christmas breaks, helping carry trees to customer’s cars.

After a move to tight end his junior year, it was clear Scherff was destined for the offensive line, and ultimately was moved to right tackle. Eventually his size and athleticism landed him at Iowa, under the tutelage of offensive line guru Kirk Ferentz. In 25 seasons coaching there, he never had one freshman enter the program weighing 300 pounds or more, until Scherff set foot on campus. Their vision was clear from the beginning, and that was to transform Scherff into the next great Iowa offensive lineman, following in the footsteps of Marshal Yanda, Riley Reiff and Bryan Bulaga.

Scherff hadn’t really started weight training until his junior year of high school, so right away strength coach Chris Doyle put him on a strict eating regimen, one that shed nearly 8 percent of the body fat off Scherff. What Doyle molded him into is somewhat of a monster, as evidenced by a video last summer that surfaced. In it, it shows the superhuman brute strength of Scherff, hang cleaning a school-record 443 pounds, not once, but for three reps, which can be seen here.

After Reiff became a first round pick by the Lions after his junior year, Scherff slid into the left tackle spot and has flourished ever since.

“You know that friend we all have who can just pick up a musical instrument and play it?,” asked offensive line coach Brian Ferentz, Kirk’s son. “For Brandon, football is like that. Football just makes sense to him. He may not be able to verbalize to you exactly why he did something, but it’s perfect.”

This was put on display in November 2013, when the Hawkeyes matched up against the Nebraska Cornhuskers, and their stud pass rushing phenom Randy Gregory, another first round pick this year, lined up on the right side, squaring off against Scherff.

It was an obvious passing down, and Gregory had his ears pinned back, ready to get after the quarterback. Scherff locked in on him in pass protection at the snap, and as the play broke down, Iowa quarterback Jake Rudock scrambled to the left. It was in this moment that Scherff went from protector to road grader, and Gregory ended up at the opposite side of the field. Gregory is considered a near top-10 lock in this year’s draft, as is Scherff, so this was a very dominating showing.

“Imagine your car is stalled on the top of a hill and begins to roll back down. You’re trying to stop it,” said Brian Ferentz. “Then suddenly, not only are you stopping it from rolling down the hill, you’re pushing it back up the hill for five seconds. That’s what Scherff did on that play. And he did it against one of the most gifted athletes we’ve seen line up across from us.”

A throwback player if there ever was one, Scherff isn’t a big talker, a trait he says he got from his parents. But on the field, he is the total opposite, a nasty, bully of a player who’s a road grader in the run game and isn’t afraid to mash an opponent’s face into the ground. He’s as tough as they come, and this past September offers proof. Against Ball State, Scherff tore the meniscus in his knee, finishing out the game and not finding out the news until Monday night. Tuesday morning, the knee was scoped, and Scherff denied the pain medicine, knowing team doctors would hold him out. Wednesday came, and he didn’t miss a beat, and he played that Saturday in the rivalry game versus Iowa State. At the combine, where prospects are poked and prodded, team officials asked “It says you missed one practice. Do you mean one game?” “No,” Scherff said. “One practice.”

Scherff was questioned about this at the combine, and he responded, “I’ll play wherever you need me to play.” Former Hawkeye great Yanda, an All-Pro guard for the Baltimore Ravens, even took to defense in the fact that Scherff could play guard, just as well as he could play tackle.

“To say he’ll move inside right away, I don’t think that’s necessarily going to happen,” said Yanda, who trained with Scherff at their alma mater in the offseason. “Sure, guys who are taller with longer arms usually excel at tackle. But Matt Light was 6-3 ½, and he was a Pro Bowler who played left tackle for 10 years. It’s more about the team, and what the team needs.”

This is one of the endless reasons why Scherff is the odds-on favorite to be the first offensive lineman off the board in the first round of April’s draft. His team-first attitude, nasty temperament and selflessness, both of which would make him a great fit in the black and gold.

“You’ve got to remember where you came from, and you can never let that go,” Scherff said. “Coach Ferentz is the one who gave me the opportunity at Iowa. Brian was the one who yelled at me each day and kept me on track to become a better player. Coach Doyle changed me from a 320-pound chubby dude to an all right football player. I wouldn’t be here without them.”

Despite obvious needs on defense, the physical Scherff would immediately add some nasty to a Steelers’ offensive line that could use it. Whether playing him at left tackle or plugging him at left guard and forming a dominating trio on the interior with Maurkice Pouncey and David DeCastro, he’s a potential All-Pro player who would be very difficult to pass on. Couple that with the fact that Colbert and company usually never reach for a need but instead go the best player available route, and Scherff, if he slides, very well could be the pick at 22.

“I think the thing that all of us appreciate about Brandon is the guy that he is and the person he is, and the attitude he brought every day,” Kirk Ferentz said about his star left tackle.  “I’ve never met a guy more appreciative, more humble. And if anybody had a reason to maybe feel a little cocky, that would be him.”