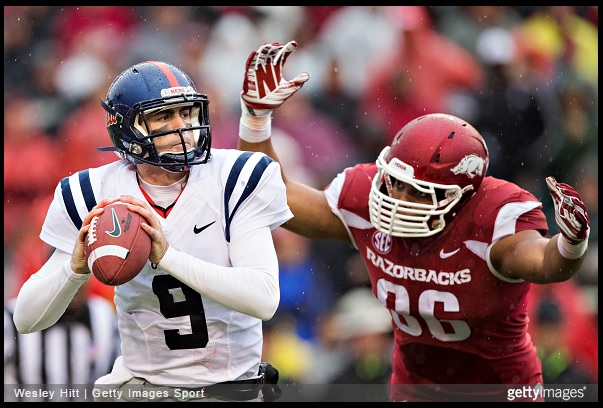 The Pittsburgh Steelers are allowed to formally meet with 60 players for 15 minutes each this week at the 2015 NFL Scouting Combine and while we’ll never know that entire list of draft hopefuls, we should know who about half of them were by the end of the weekend.

One defensive player who reportedly met with the Steelers while in Indianapolis is Arkansas tweener Trey Flowers, according to Chase Goodbread of NFL.com.

Flowers, who measured in at the combine at 6’2″ and weighed 266 pounds, led Arkansas last season with 15 1/2 tackles for loss, six sacks and nine quarterback hurries. He also ranked third on the team in tackles with 68.

In an interview with the Tennessee Titans official website this past week, Flowers admitted that he really didn’t stand up that much at Arkansas as he primarily played with his hand on the ground. In addition to that, he also wasn’t asked to drop into coverage very much so he’ll have a lot to prove Sunday when he’s asked to go through the outside linebacker drills at Lucas Oil Stadium.

Being labeled as a tweener might bother some players, but it doesn’t necessarily bother Flowers.

“No. I don’t really pay attention to it,” Flowers told Drew Davison of the Star-Telegram prior to leaving for the combine. “I don’t necessarily want to drop it. That may be a good thing for me to play in a variety of defenses, and if I can show my versatility, my elusiveness as far as covering guys and sometimes occasionally coming down rushing the passer and setting the edge, stopping the run, I’m all for that. I just want to have a whole variety, no limits to what I can do out there on the field.”

Should Flowers wind up being drafted by the Steelers in a little more than two months from now, he certainly will be a project. While some draftniks currently have him pegged as being a second or third round selection in the draft, he might have to wait until the fourth round until his name is called being as he’ll have a lot of learning and transitioning to do at the NFL level.

Flowers probably isn’t not long enough to play defensive end in a 4-3 defense so that means teams that run 3-4 fronts like the Steelers do will be the ones most interested in him on draft day.

We’ll likely have a full breakdown of Flowers for you next week so stay tuned for that.