As the “BellWatch” continues, football analysts and Pittsburgh Steelers fans alike continue to monitor the Steelers all-purpose running back on an almost minute-to-minute basis.  On Monday, when Bell was reported to be limping badly, it seemed almost impossible that he would be on the field when the Steelers take on the Ravens in the wild card round.  He showed significant improvement over the next 2 days, and optimism ruled the middle of the week.  With an extra practice session Friday, Bell has one last chance to practice with the team before the game, which is typically a Tomlin requirement for making the 46 man gameday roster.  Interestingly, OC Todd Haley said that “he would be comfortable playing his star tailback without practice if the knee checks out by Saturday’s pregame routine” per NFL correspondent Aditi Kinkhabwala.

While I don’t think he will be sufficiently recovered in time to face the physical Ravens defense, I am fairly sure that Le’Veon Bell will need to wear a knee brace for protection and support when he does return to action.  Which brings up a common concern and bias among players that a knee brace will negatively impact a skill player’s performance.  Remember when RGIII refused to wear his brace this season because it had been more than a year since his ACL repair?  He’s not the only pro athlete who believes a brace will slow him down, but that may be more perception than reality.

Let’s look at the science of knee braces and how they affect athletic performance.  There’s some pretty good stuff out there.

Michael C. Hall presented “The Effects of Wearing Prophylactic Knee Sleeves/Braces on Selected Isokinetic Measures During a Velocity Spectrum Knee Extension Test” as his thesis work for a Masters of Science at Virginia Polytechnic Institute (if you need to cure insomnia, you can read the whole thing here: http://scholar.lib.vt.edu/theses/available/etd-72198-143523/unrestricted/etd.pdf).  He studied 20 varsity college football players and compared various knee extension tests in 3 scenarios: sleeved with the Don Joy Knee support; braced with the McDavid lateral knee support ; and the control, unsupported condition, aka no brace or sleeve. 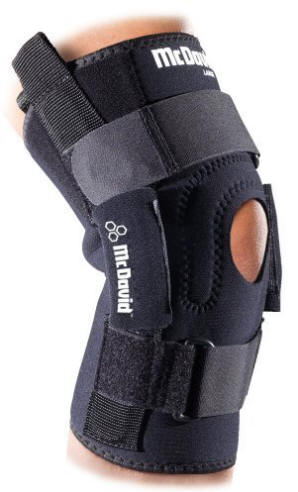 He looked at peak torque to body weight ratio, work to fatigue ratio, average power, and range of motion.  After a lot of math, Hall found that there was no difference in isokinetic knee extension whether the athletes wore the sleeve, brace, or nothing.

A study from the National Athletic Trainers Association looked at the “Effect of Three Lateral Knee Braces on Speed and Agility in Experienced and Non-Experienced Wearers” (http://libres.uncg.edu/ir/uncg/f/D_Perrin_Effect_1990.pdf).  They tested 19 post-graduate military academy football players with an average age of 19.  9 of them had experience wearing these types of braces, and 10 had no experience with any of the braces.  Each subject was put through his paces in the 40 yard forward sprint, a 10 yard shuttle run, a 20 yard backward sprint, and a 40 yard square cone drill. The square cone drill included a 10 yard forward sprint, 10 yard lateral shuffle, 10 yard backward sprint, and 10 yard carioca.  Kind of sounds like the Combine, right?  The athletes did these drills with each of 3 braces (McDavid Knee Guard, Donjoy Defender, and Anderson Knee Stabler) and without a brace, and the order of that was randomized as well.  This is actually a really good research study.

So what did they learn?

Their results showed that after an initial 14 hour adjustment period, there was no difference between the braced and non-braced athletes in any of the tests.  I think it also suggests that the Canadians in this study adjusted to sprinting in braces better than the Virginian military athletes in the prior study.  I don’t know if this should be a consideration for the next draft.

Getting back to the man of the moment, it would seem that if Le’Veon can practice in a brace for at least 14 hours, his performance shouldn’t be negatively affected by the brace in any move he would need to make, be it juking, cutting, or dashing for the end zone.  And it will offer support, even if it hasn’t been proven to prevent injury (but that’s a whole ‘nother literature review).

So if the trainers for Washington had spent a little time googling, they might have convinced their injury-prone QB to keep his knee brace on.  Not surprisingly, RGIII chose perception over science.  I doubt that Le’Veon Bell will make that mistake if he is able to play again in the post-season.