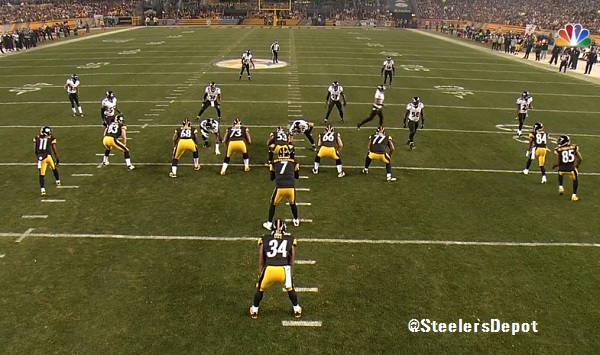 Are the Pittsburgh Steelers a good run blocking team, or aren’t they? If the 2014 season is anything to go by, it very much depends on the game.

Despite the fact that the Steelers finished with the second-leading rusher in the league with Le’Veon Bell’s 1361 yards, Pittsburgh as a team only finished the year ranked 16th in the league in terms of offensive production on the ground, and netted just 10 total rushing touchdowns.

Though Bell finished the season averaging 4.7 yards per carry—an impressive figure, no doubt—that number was on a steady decline over the past few weeks of the season. collectively, the Steelers only averaged 4.1 yards per carry on 423 total runs, gaining 1752 yards on the ground in all.

All of those numbers are very middle of the road, and is a testament to the inconsistency that the Steelers found on the ground game depending on where they found themselves in the season, as they continually ran hot and cold in terms of ground game efficiency and total production.

Just take a look at Bell’s numbers throughout the year. In six of the first seven games, he averaged at least 4.6 yards per carry, with four of those games exceeding five yards per touch. Then the team suffered a dry spell and his production dipped below four yards—even going so low as two yards per carry against the Baltimore Ravens—for three straight weeks.

That then gave way to the best stretch of rushing offense that the Steelers had probably seen in years. In a span of three weeks, Bell carried the ball 90 times for 484 yards and four touchdowns (on the ground, with another through the air).

And then the wheels, seemingly, began to fall off over the course of the final three weeks of the season, as teams began acknowledging keying in on Bell and taking him out of the game. Over the final three weeks—notably, all victories—he only carried the ball 48 times, totaling 130 yards, which translates to just 2.7 yards per carry.

Of course, Bell was limited to eight carries in the regular season finale after he suffered a hyperextended knee. That meant that he was forced to sit out the Steelers’ first postseason game on Saturday against the Ravens.

Without Bell, the Steelers were left with the newly signed, twice-cut Ben Tate, in his first week with the team, in addition to rookie undrafted free agent and former practice squad player Josh Harris, as well as rookie third-round, 170-pound running back Dri Archer.

Against the Ravens, the three of them combined for 43 yards on 15 carries, or just under three yards per carry.

There is, unfortunately, a theme to be found in many of these games with low yields in yards per carry. Typically, these are the games in which the offensive line, and often the tight ends, have struggled in the running game. Many of those games, admittedly, came against tough defensive fronts. But I come away from this season wondering just where this team, and more specifically this offensive line, is in terms of executing the running game, and if another season of polish would even help.