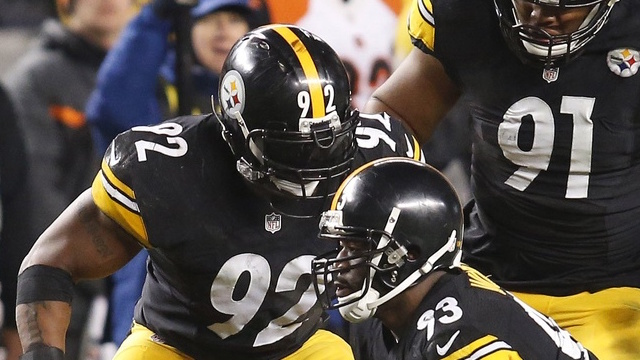 Pittsburgh Steelers outside linebacker James Harrison missed two games at the start of December while working through a knee injury. At the same time, second-year linebacker Jarvis Jones returned from the short-term injured reserve list, and spelled starter Arthur Moats in the nickel defense.

When Harrison returned in the penultimate game of the season, he not only reclaimed his freshly won starting position, he dominated the snap count. Against the Kansas City Chiefs, Harrison only sat out eight of 66 defensive snaps, in which Jones replaced him on the field. Moats didn’t see a single snap for the first time all season long.

This past Sunday, however, the Steelers chose to rotate their outside linebackers for a series, sending Harrison and Jason Worilds to the sidelines. For three plays, it was Jones on the right side, with Moats filling in for Worilds on the left side.

It was just three snaps apiece, but it is something that the Steelers could continue to use into the playoffs in order to keep their outside linebackers fresh.

Remember, it’s only been within the past two weeks that Pittsburgh has actually had the depth at outside linebacker to do so. They carried only three edge rushers on the initial 53-man roster—Worilds, Jones, and Moats—and it wasn’t until Jones went down in the third game of the season and was placed on injured reserve that Harrison was signed.

Jones proceeded to miss the next nine games, during which Harrison steadily chipped away at Moats’ playing time to the point where he finally started his last two games before he injured his knee.

It was only at that time, with Harrison sidelined, that Jones was finally activated and returned to the field. Thus, for 14 of the 16 games the Steelers have played this season, they only had three options at outside linebacker.

In other words, Dick LeBeau and the defense has not had a lot of time to consider how to best make use of the depth that they now find in front of them. While Worilds, still fairly young, has been something of an iron man, missing only 12 snaps, it’s certainly true that the 36-year old Harrison could benefit from being spelled a time or two per game.

Of course, Harrison said after his first game back that he felt as good or better than he had in the last few years. That was after sitting out two games, suggesting that the rest did him good.

Perhaps Worilds doesn’t need quite so much rest, but it’s also worth considering the value of showing your opponent different looks, in addition to keeping Moats active on the defensive side of the ball.

The Steelers have not been shy with rotating their inside linebackers to get the best matchup this season. Perhaps they shouldn’t be afraid to do the same with their outside linebacker as well, now that they have the means to do so.