Breaking down the five sacks allowed in the Pittsburgh Steelers’ Wildcard loss to the Baltimore Ravens. 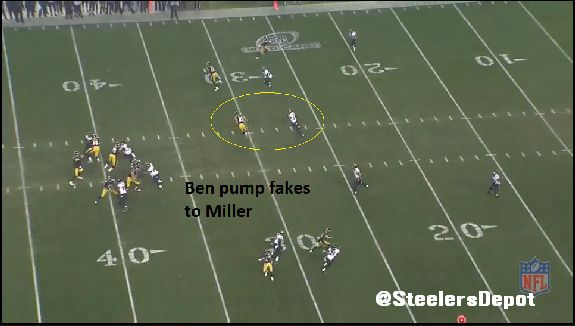 There’s really nothing else available downfield for Ben. Someone could argue he should look for Will Johnson in the left flat but to try and throw from the far hash against a squatting defender isn’t a chance I’d recommend taking. 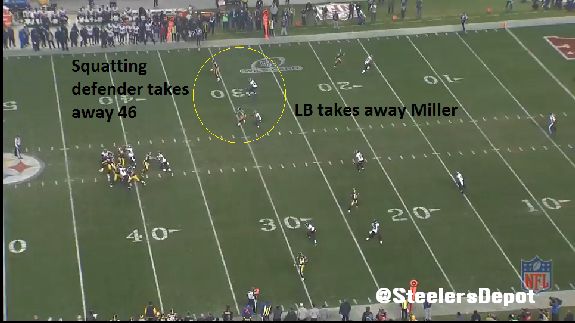 Although the pocket collapses and squeezes after both tackles get walked into the pocket, notably Kelvin Beachum getting bull rushed by Terrell Suggs, I still put some of the blame on Ben for failing to show mobility within it.

Not many times we say that about him. But after he hits the height of his drop and pumps to Miller, Ben never moves in the pocket. No hitch, no slide, he sticks in the ground. Not having to change the spot where defenders attack makes their job a whole lot easier. In essence, Roethlisberger became a sitting duck. 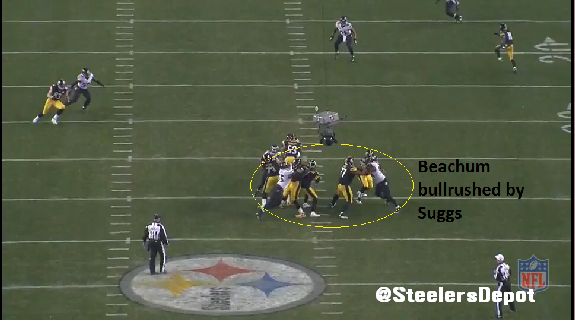 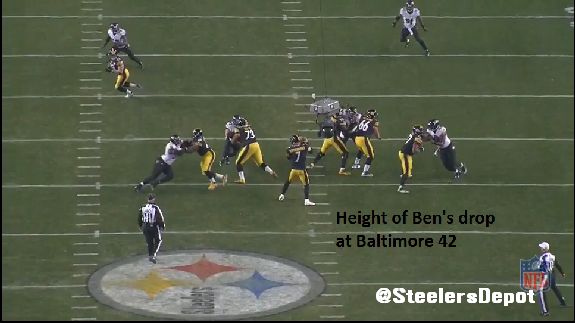 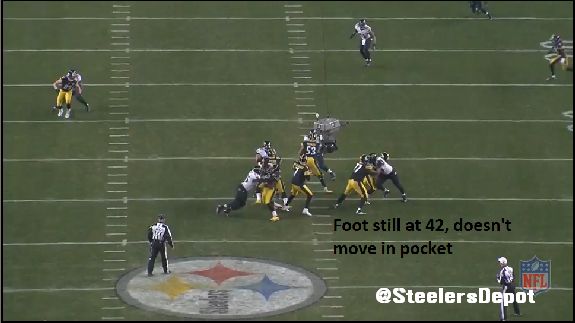 Hindsight may be an aid here but he should have just thrown it to Miller immediately and picked up five yards. 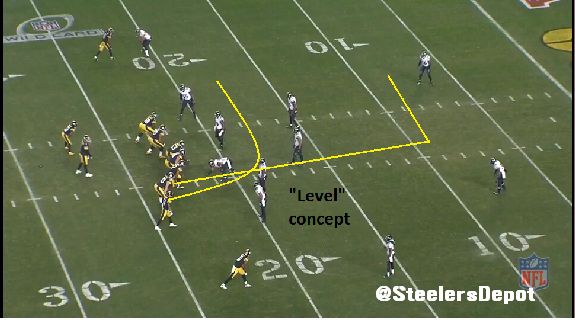 Roethlisberger needs time to let the route develop but is barely gets it and none to get to move on in his progressions.

The route isn’t available anyway. Only one linebacker takes the crosser while C.J. Mosley maintaining depth and squeezing the window on any throw to Miller. 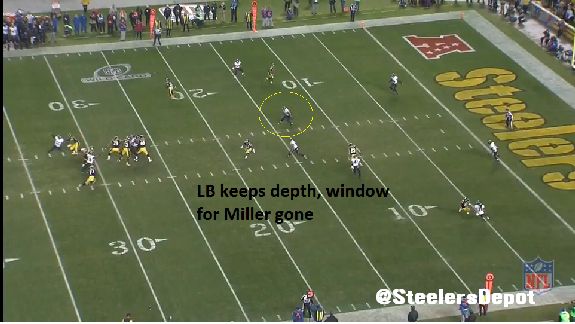 Turning our attention to the line, Marcus Gilbert doesn’t handle Elvis Dumervil’s punch well. The Steelers’ right tackle winds up bending slightly at the waist, is unable to slide laterally, and can’t absorb. Dumvervill appears to rip through and track Roethlisberger down. 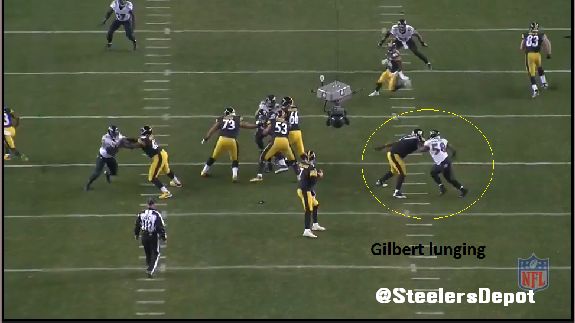 There’s just no one open here. Maybe Miller at the end but by that point, Roethlisberger is in the ground. 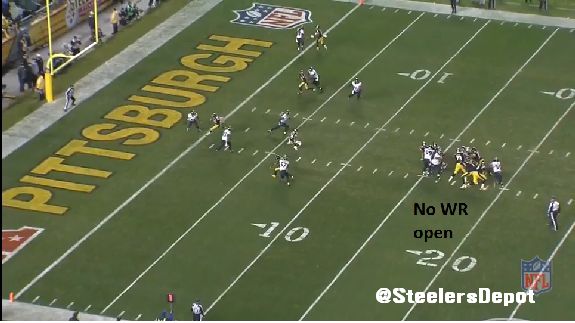 The Ravens bully the “A” gaps with their two big uglies – Haloti Ngata and Brandon Williams. Williams eventually “loops” over Ngata and past Ramon Foster, though I’m not sure if this is even by design. Just collapse the pocket, walk Pouncey far behind the line, and get to Ben along the way. 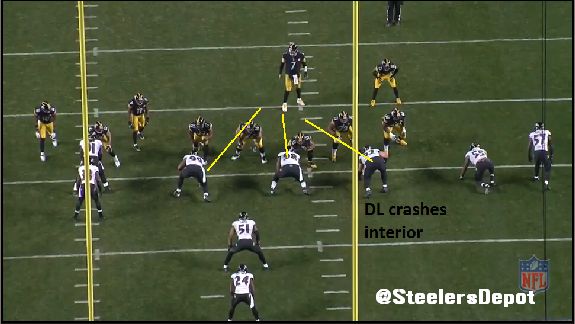 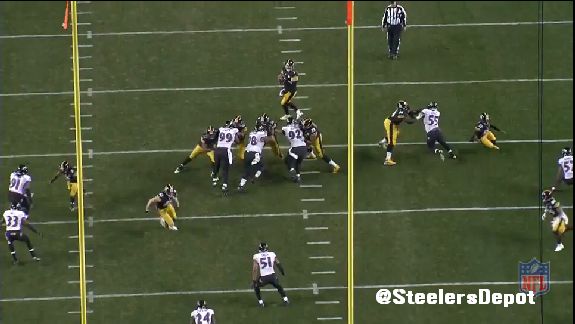 Kudos to the Ravens for carrying each route but I’ll put the blame on the Steelers’ line. Half on Foster and half on Pouncey for being pushed into the pocket. 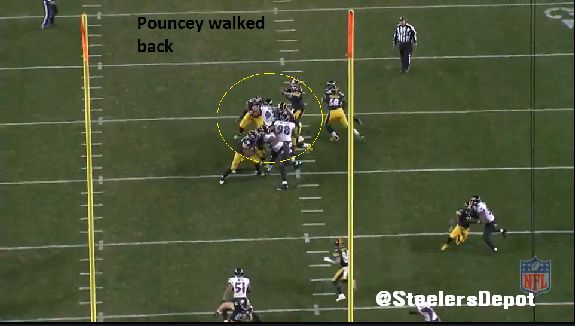 Aggressive pre-snap look from the Ravens. Six on the line of scrimmage, accounting for every gap. As they love to do on 3rd and long, you’re not sure who is rushing and who isn’t. 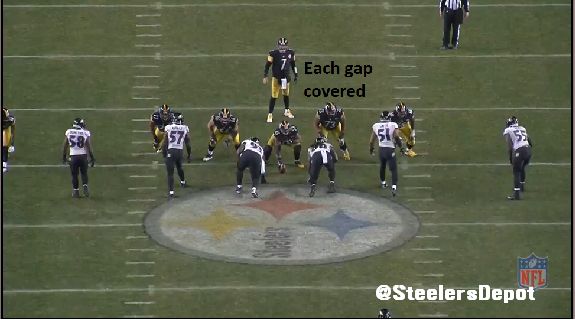 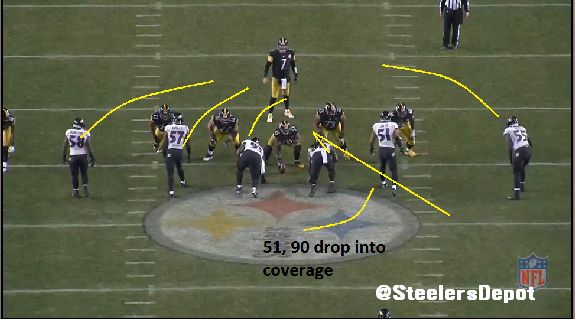 They drop inside linebacker Daryl Smith off the snap and have Pernell McPhee “touch the tackle” – though here it’s the center – to draw eyes and then bail into coverage. This takes away Brown’s slant and the lone quick route for Roethlisberger. 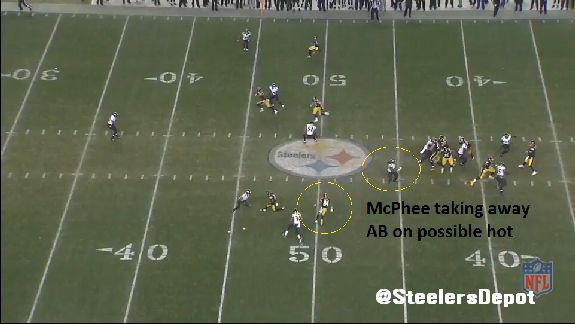 With the Steelers choosing to slide to their left, Dumervil is left scot-free of the right side. It’s really just a guess as to which side you want to try and slide to. With the right side not being Roethlisberger’s blindside and the desire to throw the slant to the left, the decision to slide left can’t be faulted. 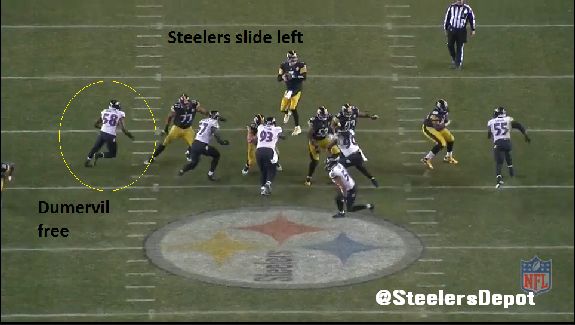 It’s just one of the many times where the Steelers have incorrectly slid against the Ravens over the past few seasons. Schematically, they always know how to best us. And they show it again.

The Ravens run a stunt between McPhee and Ngata and there’s no chance for it to be passed off between Ramon Foster and Pouncey. With Pouncey being aggressive to engage Ngata, the two offensive lineman aren’t playing on the same level and can’t take the stunt. Ngata shows a violent punch on Pouncey, knocking him clean off his base and winning inside. 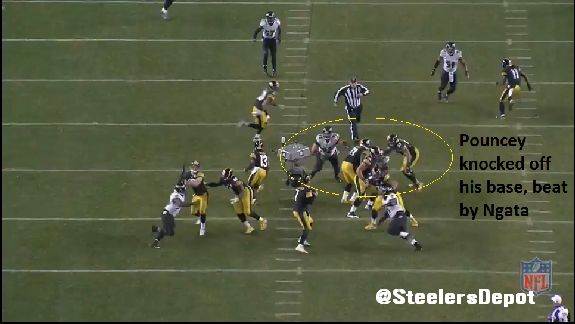 On the outside, Mike Adams shows poor technique against Courtney Upshaw. The linebacker is playing a wide technique that forces Adams to cover more ground on his kickslide. One of those situations as a defender when you know it’s pass and you can pin your ears back and get to the QB.

Adams lunges on his punch, completely overextended, and shows severe flatback. Naturally beat around the edge. Just more of the same woes from 76. 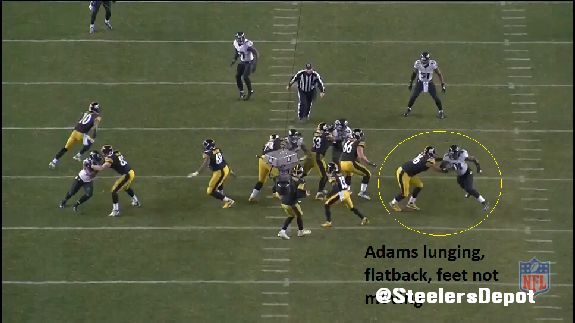 With pressure from the outside and pressure up the middle, there’s nowhere for Roethlisberger to escape. Down he goes, right along with the Steelers’ season.