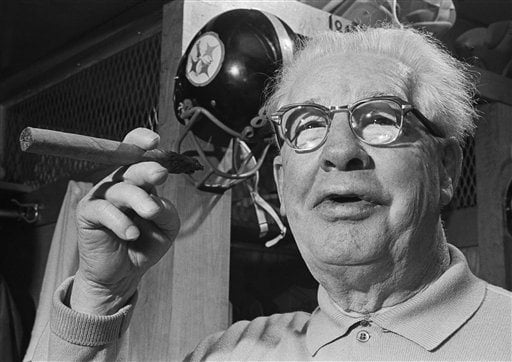 Midway through the 2014 season, the NFL announced it’s brainchild of an annual award, with it’s main purpose to showcase those individual players who lead by example with their standout sportsmanship, both on and off the gridiron. There will be one player representing each of the 32 NFL franchises, and earlier this morning, the league announced this particular award will be named after none other than legendary Steelers founder Art Rooney Sr.

“Art Rooney is an iconic figure in NFL history,” said NFL Commissioner Roger Goodell. “It is appropriate that we honor his legacy in this way and recognize NFL players for one of the important values that Mr. Rooney represented so well.”

These values were everlasting throughout the life and times of Rooney. Once, before kickoff against the New York Giants, Rooney was leafing through his own program, which revealed that Giants owner, and equally revered Tim Mara, began his career as a bookmaker. Art decisively instructed all five of his sons to gather up several thousand of the programs and tear out this page. He simply refused to allow a fellow owner to be ridiculed. Can you imagine Dallas Cowboys’ owner Jerry Jones doing that when facing Dan Snyder’s Redskins? When one of his players was in the hospital, Rooney would frequently visit, bringing them whatever they needed, including his wife Kathleen’s homemade delicacies. When boarding the team airplane after away games, Rooney would be front and center, handing out beers along with his trademark cigars. Looking back, Rooney undoubtedly left an indelible mark on those he touched.

“I like to think of my grandfather as someone who truly was a good sport, somebody who cared about the respect and the integrity of the game,” Art’s son and team President Art Rooney II said.

This prestigious award will be honoring the “NFL player who demonstrates on the field the qualities of great sportsmanship, including fair play, respect for opponents, and integrity in competition,” according to a statement by the league. Much like the winner of the “Walter Payton Man Of The Year Award” , recognizing outstanding volunteer and charity work, the “Art Rooney Award” will be voted on by NFL players.

The Steelers’ player who’s up for the award is none other than Troy Polamalu. Known for his hard hits and playmaking ability, he is the definition of a good sportsman if there ever was one. Even when facing off against the hated Baltimore Ravens, in between the whistle, he’s trying to rip heads off but when that whistle blows, he’ll be the first player to lend a helping hand up off the ground or commend an opponent for a good play.

The initial winner of this award will be announced on January 31, at the fourth annual NFL Honors. Of the 32 finalists, the selections were voted on by four members of the NFL Legends Community. Those four players are former Tampa Bay Buccaneers running back Warrick Dunn, former New York Jets running back and 2012 Hall Of Fame inductee Curtis Martin, former Denver Broncos linebacker Karl Mecklenburg and former Cincinnati Bengals safety Leonard Wheeler. They then chose four players from each conference, and the remaining eight were chosen by the league’s players.

The winning player will receive a $25,000 donation from the NFL Foundation to whatever charity they see fit, and will also take home the very first Art Rooney Trophy.

“When I first heard about it, I wasn’t sure because I didn’t want it to be just another award,” said Steelers Chairman Dan Rooney. “But then as we talked about it more, it became clear they wanted to make it a prestige thing.”