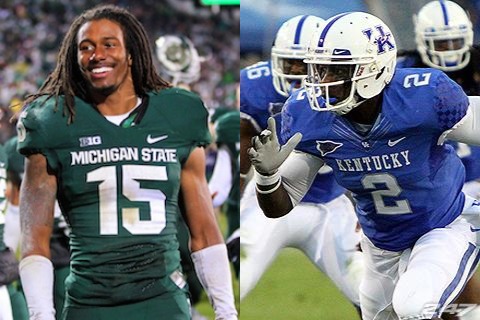 With the Senior Bowl now behind them, CBSSports.com draftniks Rob Rang and Dane Brugler both decided to release new versions of their first-round mock drafts.

As far as the Pittsburgh Steelers are concerned, both Rang and Brugler have them addressing two different areas of need on the defensive side of the football this time around.

Rang has the Steelers selecting Michigan State cornerback Trae Waynes with the 22nd overall pick in the first round and he writes:

The secondary has arguably been the Steelers’ biggest weakness all season. Waynes possesses terrific length (6-1, 183 pounds), fluidity and ball-skills.

As for Brugler, he still has the Steelers drafting Kentucky defensive end/outside linebacker Alvin Dupree with the 22nd overall pick in the 2015 NFL Draft and he even kept the same reasoning as to why as he did in his previous mock draft from last week.

With Jason Worilds expected to sign elsewhere in free agency, the Steelers will be looking for a young pass rusher to groom in the draft. A former tight end, Dupree is still raw in certain areas, but the natural athleticism is outstanding.

What’s interesting when you look at both of these mock drafts side-by-side is that both Rang and Brugler both have each others pick for the Steelers going off the board earlier in the round. It’s also interesting to see where both have Clemson linebacker Vic Beasley. Brugler has Beasley going in his top-10 while Rang has him coming off the board at 24th overall.

Interestingly enough, Brugler also currently has Miami of Ohio cornerback Quinten Rollins and Minnesota tight end Maxx Williams both going in the first round while Rang has neither in his latest mock of the first round.