Second half game notes from the Pittsburgh Steelers Week 11 27-24 win over the Tennessee Titans.

– Brett Keisel swimming over the center and getting pressure on this twist. 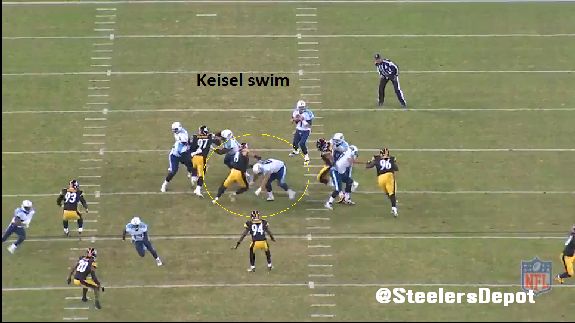 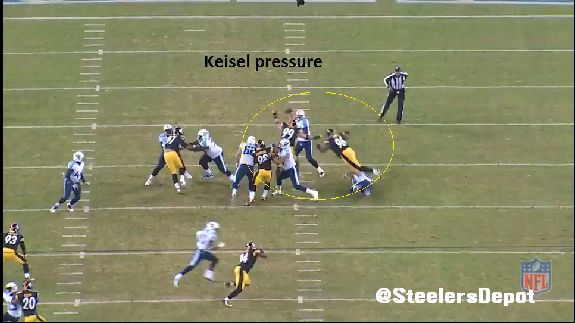 – Arthur Moats’ block in the back that negated Antonio Brown’s long punt return was a questionable call, to say the least. Looked worse in real-time than it did with the benefit of replay. Titans’ defender tripped over his own guy.

– Go back and look at Brown’s route in that GIF. Now compare it to Markus Wheaton below. Wheaton sloppy at the top of his route, unable to get separation, and is late out of his break. Pass falls incomplete.

– Titans stick eight men in the box so Ben Roethlisberger smartly throws the hot to Brown on the slant. Respectable gain of four. 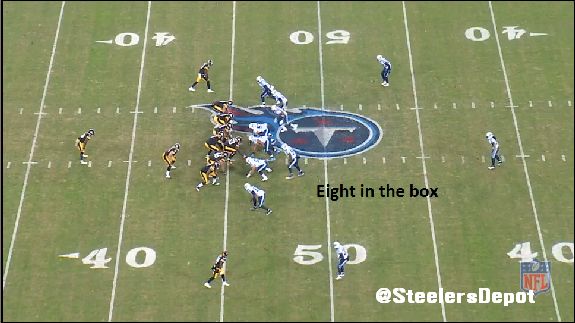 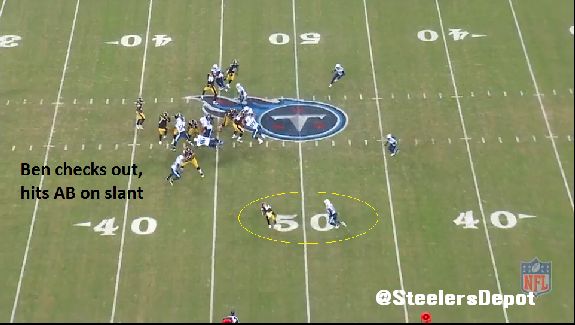 – Antwon Blake forcing a fair catch despite being double-viced on this punt. Nice. 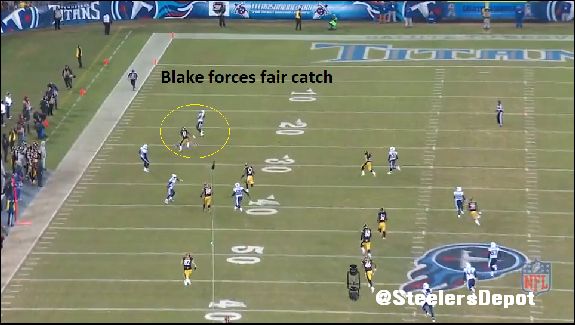 – Sean Spence appears to over pursue and stacks into the same gap as Cam Thomas. Creates a cutback lane the back hits. 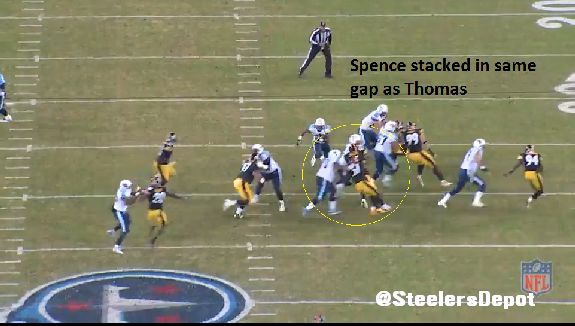 – Stephon Tuitt only played four snaps but made them count. Gets penetration here, forcing the back down the line, and he chips in on the tackle. 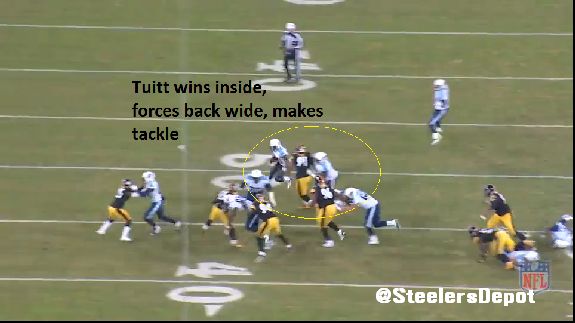 Maybe coming out of the bye, the team will ramp up his snaps to replace the older, tired legs of Keisel and Thomas.

– As shown in my scouting report, when the Titans bring in DL Karl Klug into the offense, they almost always run Power O. Do it here on 3rd and 1 to convert. Tough to stop but still frustrating. 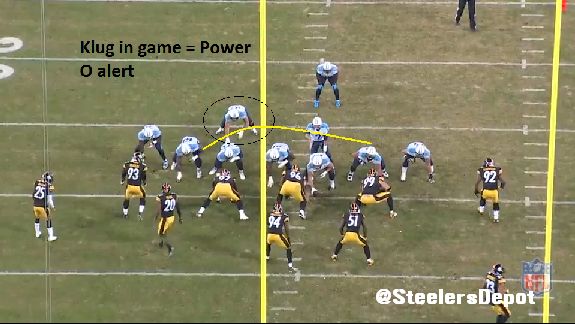 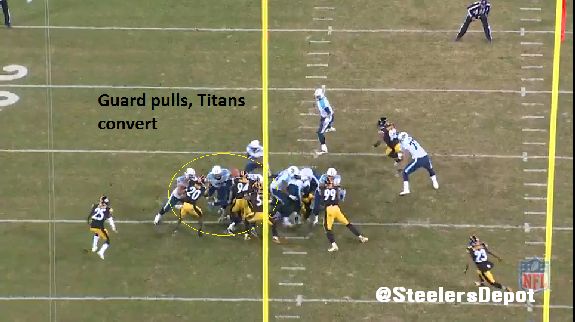 – The Titans touchdown on that drive. Got beat by Justin Hunter (the least efficient WR in the league) Chase Coffman (six career catches coming into that night) and Jackie Battle (4 catches in 2014). That was disappointing.

– And on the Coffman touchdown, Blake shouldn’t be trying to compete for that ball at its highest point. Height gets the best of him, doesn’t have a chance. Should wait for him to come down and play through the hands. Instead, Blake is a non-factor as they go to the ground. 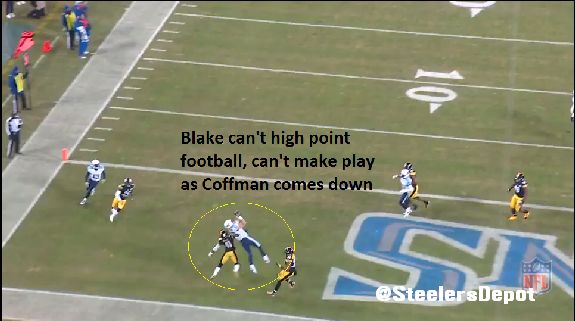 Goal line routes are a bear to defend and the Steelers have it covered pretty well. Just couldn’t finish.

– Le’Veon Bell making the DB looking silly. Gains seven. As you’ll see in the picture below, there’s eight Titans on the ground trying to tackle him. Sea of bodies. 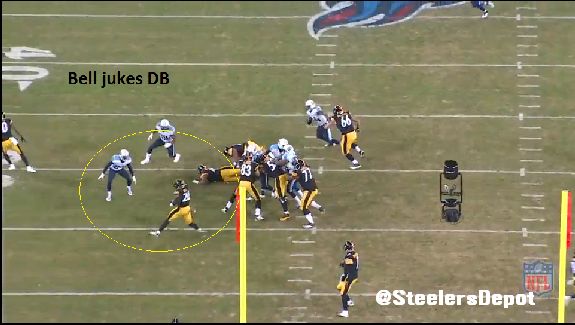 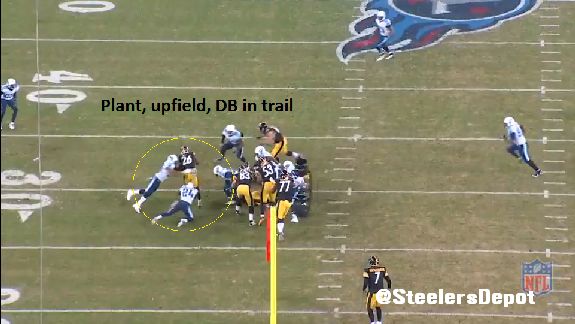 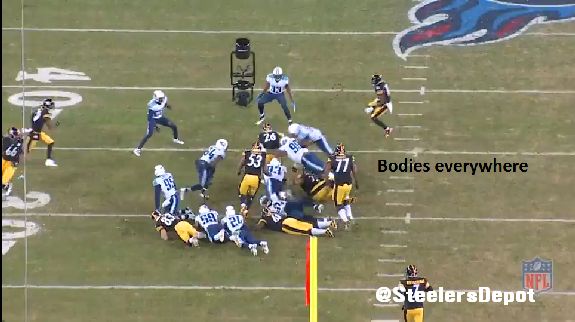 – Heady play by Martavis Bryant to throw a block downfield on the corner once he sees Roethlisberger taking off on 3rd down. Little things that get noticed and a nice effort from the rookie. 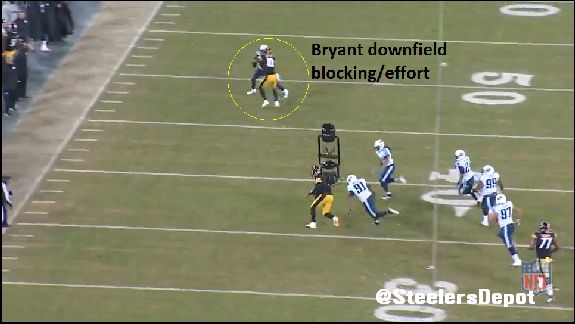 – Lazy effort at this tackle from Cortez Allen on this kick return. Allows the return man to pick up another couple yards. Just not getting anything out of 28. 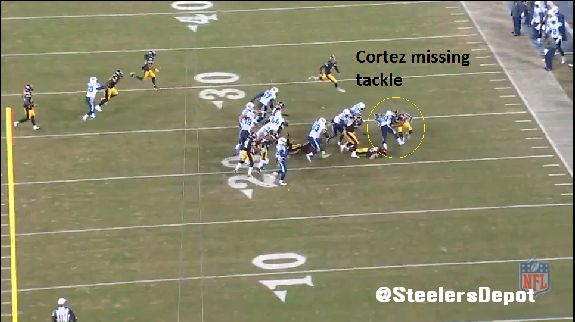 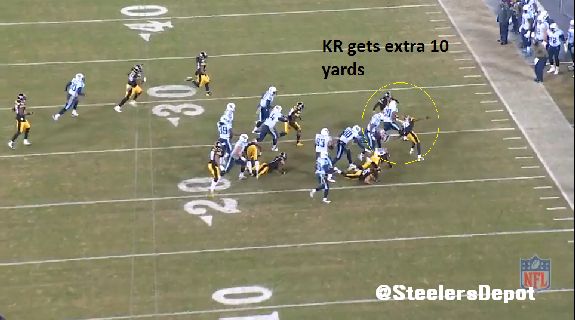 – Brian Schwenke got beat up all day. Here’s Cameron Heyward leveraging him, shedding him, and getting pressure. Causes the throw to be a bit behind and consequently dropped by WR Kendall Wright. Big play for the Steelers’ defense that starts with the pressure. 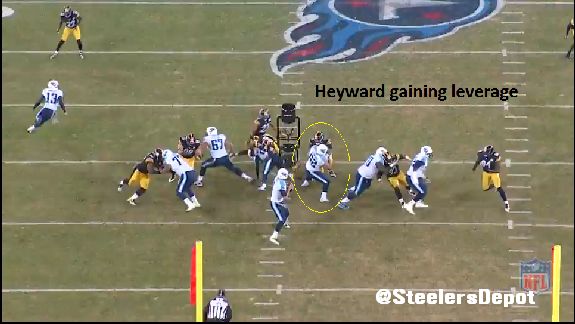 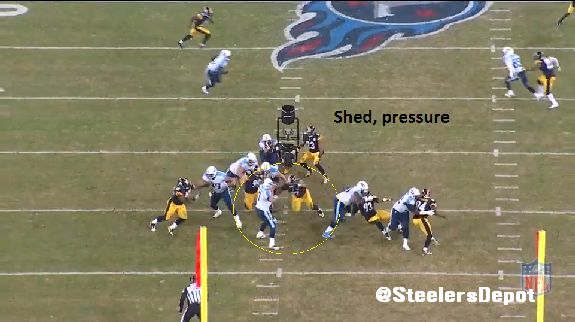 – Dri Archer trying to block this punt from a jammer spot? Huh? Not sure if the Steelers thought there would be a fake but Archer runs in from the numbers. Obviously never comes close to the ball. No clue what is happening here. 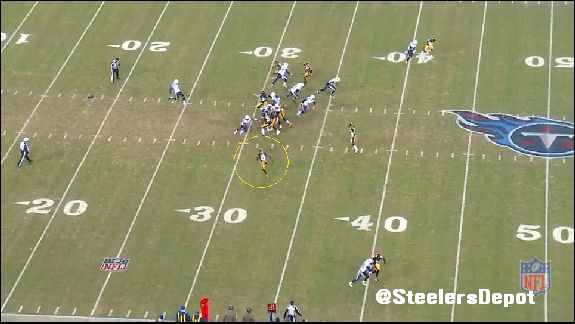 Using the Pythagorean Theorem, my math puts Archer at having to run a 3.69 40 to get the ball in time (assumes no resistance, which there would certainly be from a blocker).

Getting this feeling the Steelers have no clue how to use Archer.

– Watch Ramon Foster and Kelvin Beachum part the red sea. Bell finishes strong on the run. Lot of physicality all around.

– Steelers figured out how to beat the Titans’ blitz late in the game. Face it here and the Steelers have the perfect counter. Stack the receivers to the bottom of the screen to force the Titans to play loose coverage and have Lance Moore run a short stick route to get the ball out quick. Moore picks up 15. 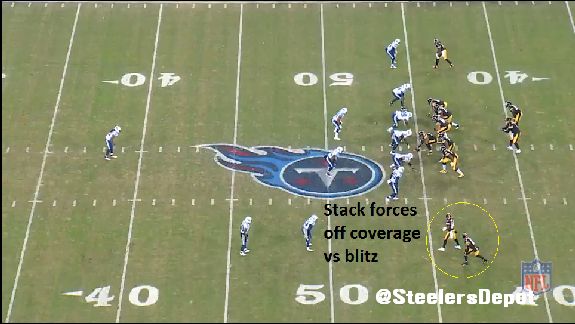 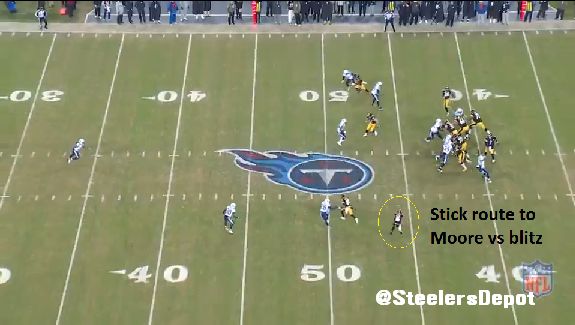 – Brown TD. Another solid route by 84 but credit to Beachum for sealing the edge and keeping the pocket clean for Ben. 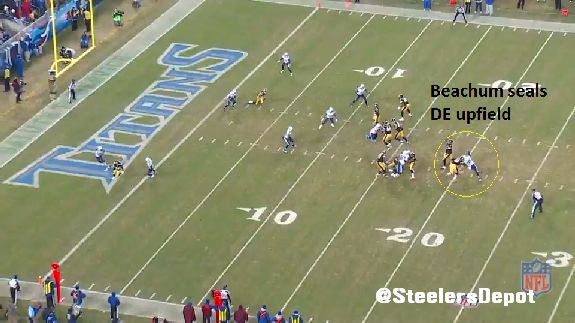 – Cam Thomas. Some good, mostly bad. Knocks Andy Levitre to the ground on the first play, gets tossed aside on this boot the very next. 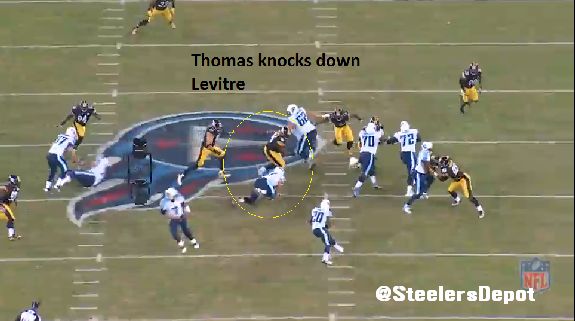 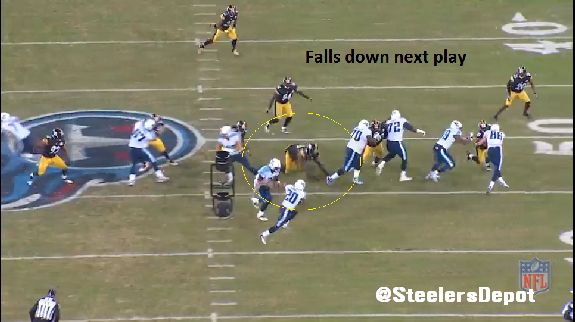 – This is from throughout the game but the Steelers’ line did work Monday night Created some huge running lanes for Bell to rip through. Get him in space to the second or third level and you have yourself a 200+ yard day. 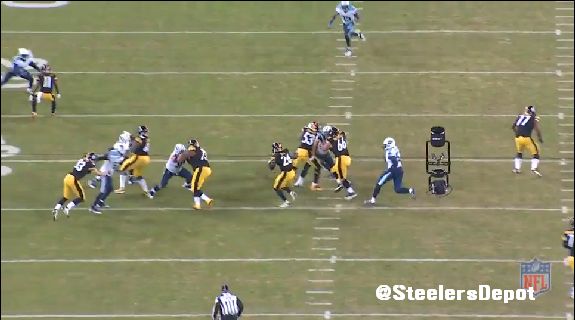 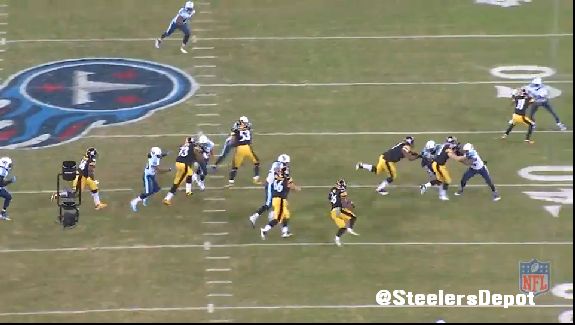 – One last look at Bell. Jukes the heck out of Michael Griffin. What. A. Day. 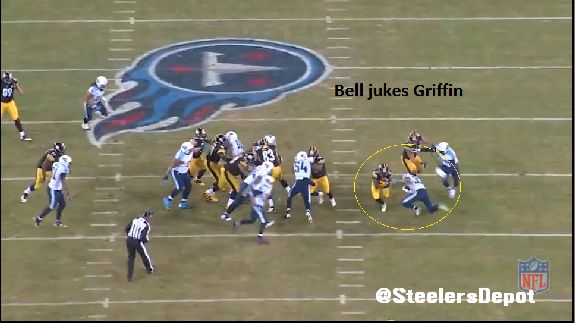