Brief scouting report of the New York Jets as they take on the Pittsburgh Steelers Sunday afternoon.

– Michael Vick certainly isn’t the elixir but he appears to be a stabilizing force that Geno Smith wasn’t. He’s still a threat with his legs and has gotten smarter with age, avoiding unnecessary hits.

As Mike Tomlin pointed out, his left-handedness presents a unique challenge. More boots to the left. And he sells playaction well. Hides the ball. 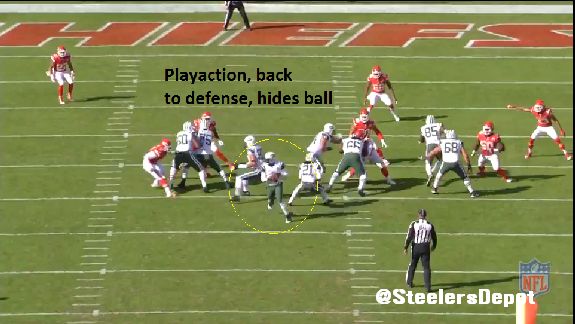 Defenders can’t leave their feet with Vick on the move. Chiefs’ DB does here and Vick ducks around him for a gain of six. 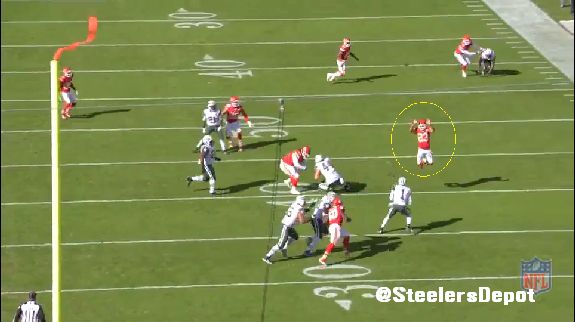 – Chris Johnson had his best game of the season against the Kansas City Chiefs rushing 11 times for 69 yards. As a team, the Jets ran for 139 yards and averaged 4.6 per carry. But Johnson is still over the hill and took advantage of a couple big holes opened up by the offensive line.

Chris Ivory was quiet but throughout the year has shown to be a powerful runner that’s difficult to bring down. He’s averaging 4.6 yards per carry.

They’ll break out the Wildcat with Bilal Powell acting as the “quarterback.” Went back and looked but couldn’t find any record of him with previous QB experience.

In Wildcat, they went with an extra lineman. Moved D’Brickashaw Ferguson to the right side and put in Ben Ijalana to LT.

– 20 of the 24 receptions from the Jets were by Percy Harvin and Eric Decker Sunday afternoon.

On the year, Decker is the lone wide receiver averaging over 10 yards per catch.

Harvin, as Tomlin from pointed out, is used all over the place. Gotten his feet wet in the offense and now the team is throwing him into the deep end. Used on 84% of the offense’s snaps.

Harvin provides this offense with some much needed explosion. Including his 42 yard reception last week, the Jets only have four receptions of 30+ yards on the season. For comparison’s sake, the Steelers had three against the Baltimore Ravens last week.

Jets lined Harvin up all over the place. Threw crossers, screens, the whole toolbox at him. Using his skillset well while trying and jumpstart this stagnant offense. 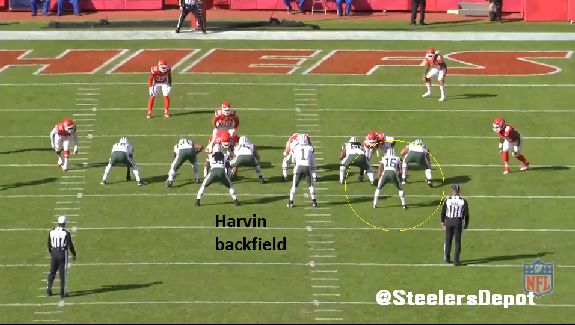 Lot of window dressing with him. Fake end arounds to freeze defenses. Effective, forces the defense to slow down and react. If they’re a step slow, they’re out of position. And given Harvin’s talent, it’s hard not to be weary of him getting the ball in space.

Alert for end arounds, real or fake, is a nasty split by Harvin (#16).

Check out the eyes he draws on this fake end around, which turns out to be an inside run. 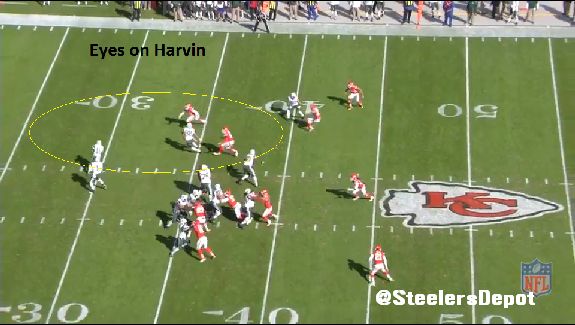 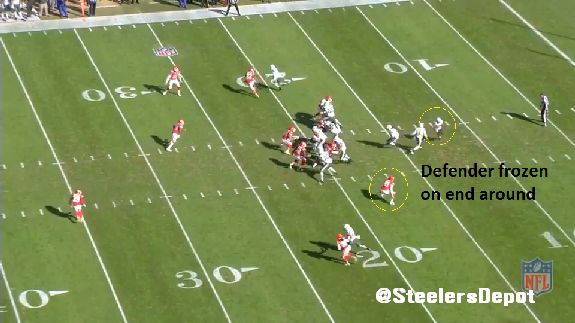 – Jace Amaro was held without a reception but is catching 82% of his targets in 2014. Scouted him this past year and he obviously poses a matchup problem, even if he doesn’t have elite speed.

– The weak link of the offensive line lies with right tackle with Breno Giacomini. Waist bender who doubles over off his kickslide. Allowed a sack against the Chiefs. Got Vick hurt. 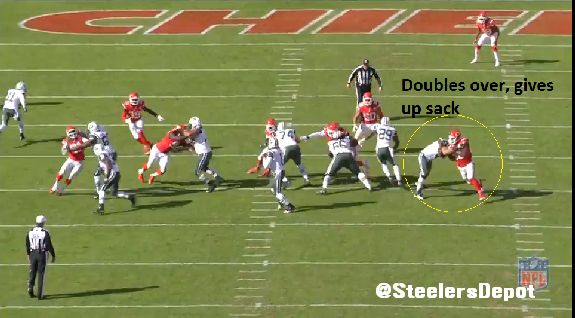 The rest of the line isn’t terrible. Do a decent job in pass protection despite the high sack totals of the year, 25, 4th most in the league. Still staples of the line of Nick Mangold at center and Ferguson at left tackle.

They don’t get a special push in the run game though.

– Conceptually, expect a spot route in the red zone Sunday. Jets ran it three times, including back-to-back plays in the second half. It’s how they scored their lone touchdown versus the Chiefs.

Spot route is a three man combination. Curl/flat/corner and the Jets run it out of multiple personnel. 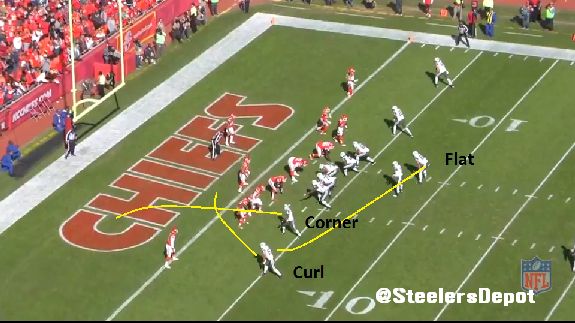 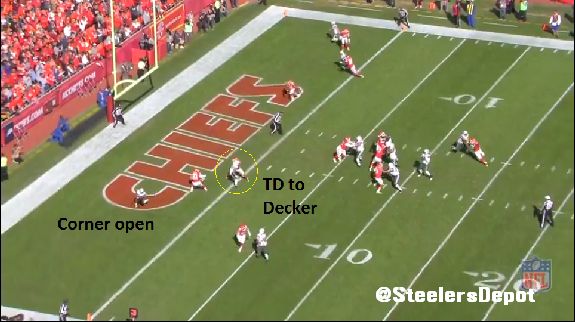 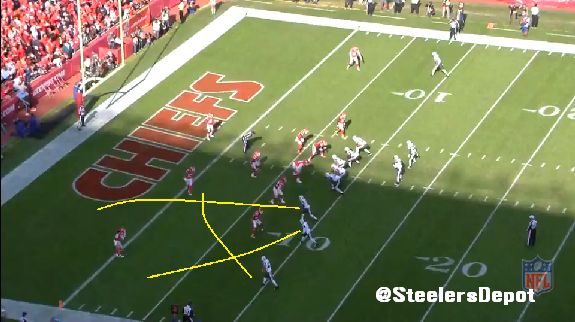 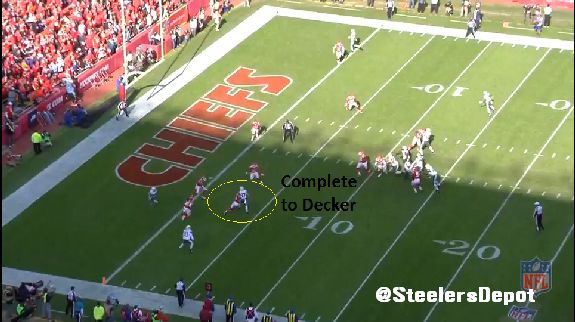 – The front seven is obviously the strength of this unit. Sheldon Richardson and Muhammad Wilkerson have combined for 7.5 sacks. Both do a great job of holding the point of attack and will take advantage of any mismatches (i.e. versus a tight end). Wilkerson, similar to JJ Watt, is a 90%+ snap count type player.

Occasionally drop Richardson into coverage, as shown below. 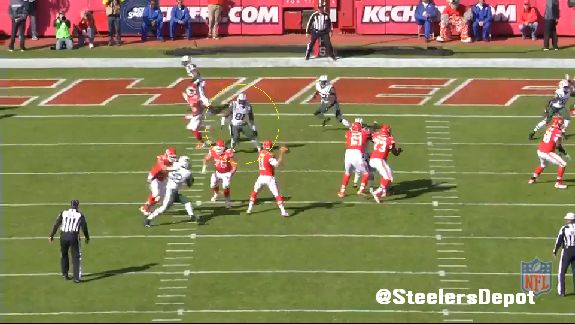 Damon Harrison is a mammoth of a dude at 350 pounds. Kenrick Ellis saw an uptick in snaps last week with 15. He’s an imposing figure at 346.

– Quinton Coples nor Calvin Pace impressed me against the Chiefs but Pace does have four sacks. And like Tomlin said, both are big players that can pose issues in the run game. Expect a lot of 12 personnel Sunday.

– DeMario Davis is a decent athlete at inside linebacker but a liability against the run who can have trouble shedding blocks.

– The issue with the Jets starts and ends with the secondary. They’ve allowed six more passing touchdowns than the next closest team, 24 in all.

The safety play has been consistent. Dawan Landry hasn’t missed a snap. Calvin Pryor is a hard-hitting rookie and three phase player, running down kicks and serving as the upback on punts.

The cornerback situation is a mess. Only two CBs have played more than half the team’s snaps in 2014. Darrin Walls, who is out with an injury Sunday, and Antonio Allen, a converted safety who was benched last week.

The starting duo may very well be Josh Thomas and Marcus Williams. Williams was signed on October 28th and played 56 of 58 snaps last week. He’s a UDFA out of North Dakota State. Thomas was cut by the Seattle Seahawks early in the year, replacing Allen.

Because Allen allows separation like this versus Travis Kelce. Ugly. 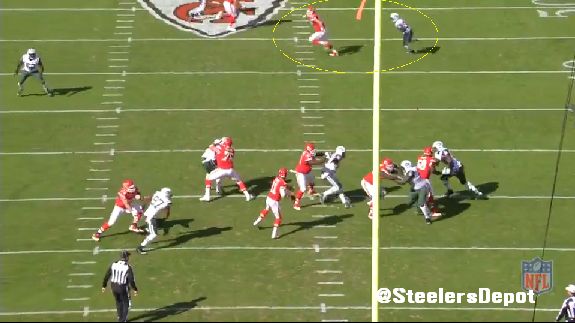 Kyle Wilson is a first round bust who strictly plays in the slot.

It’s a unit Ben Roethlisberger and company should thrash. They simply don’t have the personnel to match up against any of the Steelers’ receivers.

– As a whole, this defense doesn’t produce splash plays. One interception and two fumble recoveries in 567 snaps. They’ve only forced six fumbles and no Jet has more than one FF. As Tomlin pointed out, a big reason why their record is what it is.

One game makes it tough to judge and there only a few instances of it but there were times the Jets could have rallied to the ball better. Defensive line controls the LOS well but sometimes the linebackers and secondary don’t get to the runner in time.

I’d try to hit a couple of shallow crossers. Jets do a poor job of controlling the flat. Couple examples below. 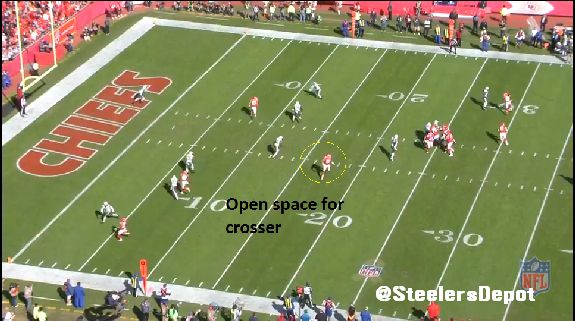 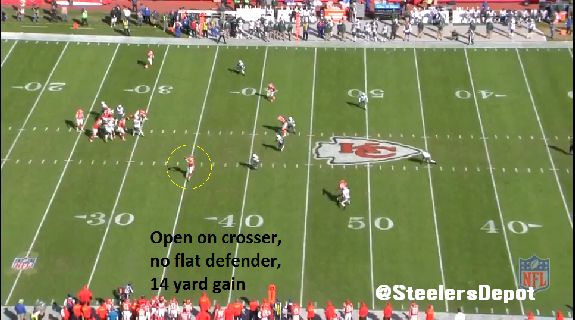 Honestly, the Jets aren’t a terrible team. They have a terrible cornerback grouping but I wouldn’t call them terrible at any other unit. Better than what their record indicates.

– Harvin has predictably been inserted as the team’s kick returner. 65 yard return last week, shown below, that illustrates his ability to follow blockers, vision, balance, and explosion.

Hakim, the brother of Az-Zahir Hakim, is an interesting story. Was a soccer player in high school, never playing a down of football before college. Went to a JUCO before transferring to Tarleton State, catching 18 career passes. Attempted to declare for the NFL early after the 2010 season but somehow missed the deadline. Went to the UFL before bouncing around a couple of practice squads.

Listed as a wide receiver, Hakim has gotten a few snaps in the Jets’ secondary because it’s so beat up. Remember Sammy Watkins getting tackled from behind after a premature celebration? That was by #15, Saalim Hakim.

Treated as a developmental guy with blazing speed, reportedly once being clocked running a 4.23 40 in college.