For a Pittsburgh Steelers defense looking to turn over a new leaf after one too many seasons of being chastised with criticisms of being old and slow, the traditional franchise decided to turn to two of its old veterans to help smooth out that transition.

One of them was defensive end Brett Keisel, who was a starter with the team just last season, when healthy, but who had been out of football essentially and was only signed late in the preseason. He returned as a super sub but has been in the starting lineup over the last two weeks due to injury.

As with James Harrison, who had two sacks against the Indianapolis Colts, Keisel has shown that his re-signing was no charity, and he is contributing to the team’s success—or at least has been doing so more often than not. His last game against the Colts may have been his best game of the season thus far. 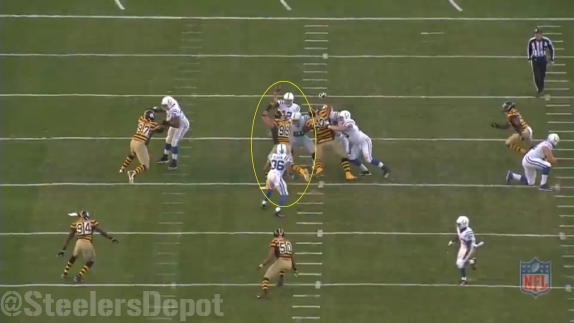 Perhaps the one thing that Keisel did consistently throughout this game, which we perhaps have not seen enough of over the course of the last few years, was simply getting his hands up in the air and clogging the throwing lanes.

That is what he did here on this early second quarter rush. While Andrew Luck was still able to deliver the ball to his running back for a short gain, this play represents a persistent theme throughout the afternoon.

The Colts had just gone down 28-10 midway through the second quarter when they got the ball back for a fifth possession. The Steelers attacked Luck repeatedly, forcing an incompletion on first down and a short gain on second down.

It was Keisel’s turn on third and long. With the Steelers in the nickel, the defensive end rushed from a standing position on the right side. With Vince Williams blitzing up the middle and pulling the center to his left, Keisel stunted around to the lineman’s right, coming in unblocked, twisting the quarterback down. Luck could only throw the ball away and punt.

Midway through the third quarter, Keisel continued to cause havoc for Luck upfront, moving around and preventing him from ever getting a solid read on where he was.

While he seems to have been incorrectly credited with a batted pass on this play at 5:13 (unless I’m missing another batted pass in the game), he did interrupt the quarterback’s lane as he was throwing. That forced the quarterback to pull up, but he was unable to secure the ball, and it just fell harmlessly incomplete instead.

Luck was able to convert this third and four play to his rookie wide receiver after getting a solid pocket with the Steelers only rushing three initially, but it’s another example of Keisel always playing with his eyes forward and getting his hands up.