– Single high with the Steelers in man coverage. 3×1 formation for the Bucs. Mike Mitchell covering Austin Seferian-Jenkins to the isolated side. Tampa Bay attacks him and the pass is complete for seven. 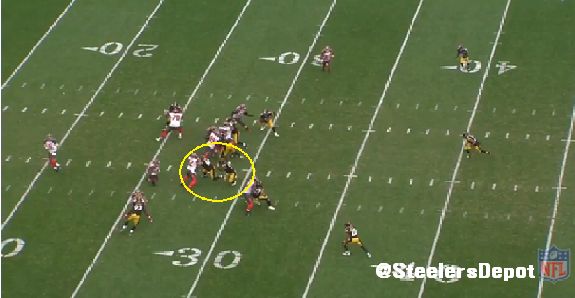 – Troy Polamalu with a poor angle to the ball. 90 degrees, far too flat. Yikes. 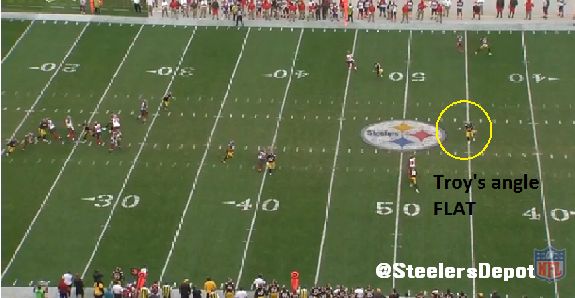 – Mike Evans holding onto Brice McCain’s jersey like the DB is a dog on a leash. Ouch, his pride. 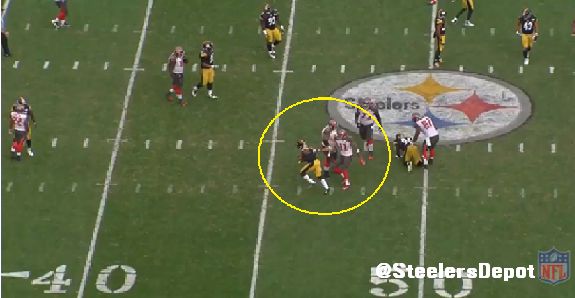 – Mike Evans ran a sluggo that got William Gay to bite just enough on the Bucs long reception down the left sideline that put the away team inside the Steelers’ five.

– William Gay plays back shoulder fades as well as you could hope for. Very difficult to defend. Tampa was 0-2 targeting him on those Sunday. One early in the third and one the play before Vincent Jackson’s game-winning TD. 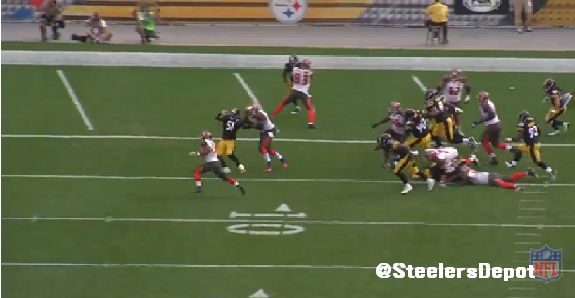 – Justin Brown gets reps because he is capable of cracking safeties. Something Lance Moore couldn’t do in his wildest dreams.

– Check out how wide Cody Wallace’s base is. No wonder he can’t stay off the ground. Shoulder-width apart is what we’re looking for. Doesn’t happen here. 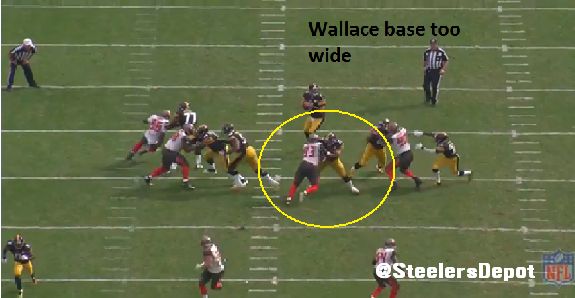 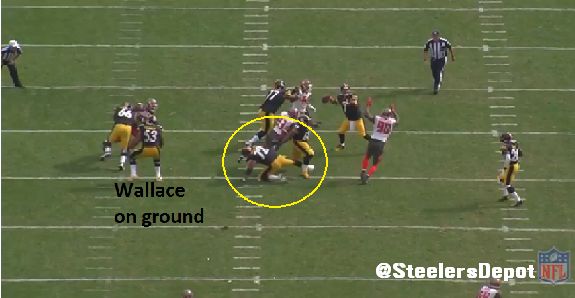 – I know Antonio Brown isn’t John Elway but man, I wish he would’ve pulled the trigger on Markus Wheaton on the trick play. Dude is open. Still, pass to Le’Veon Bell goes for a big gain. 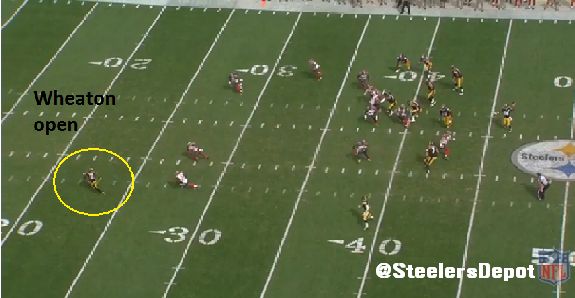 – Bucs’ DB sticks his eyes in the backfield and the Steelers make him pay, although it’s wiped out by a Kelvin Beachum hold. Heath Miller swaps hips, the defender is left in trail, and Ben Roethlisberger finds him. 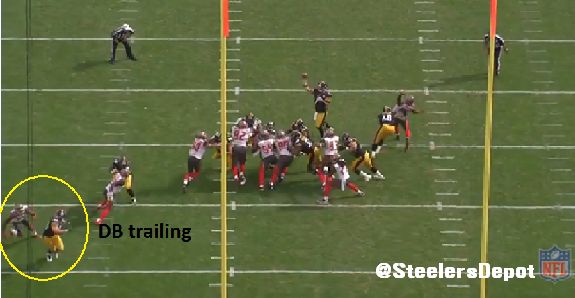 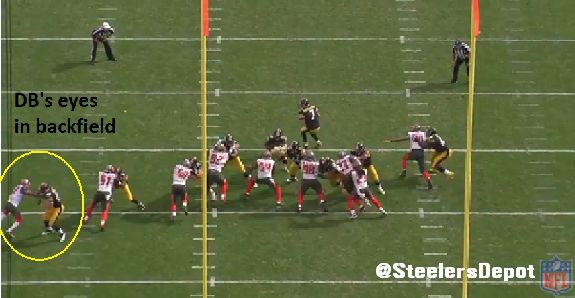 Miller caught 10 of 11 targets. The only incompletion was that ugly drop in the first half.

– Why would Roethlisberger pass up the chance to hit Brown in the flat? Wide open with only the deep safety having a chance on making the tackle. I like those odds.

Instead, he fakes the throw to AB and tries to fit in an angle route to Bell. Pass is incomplete. 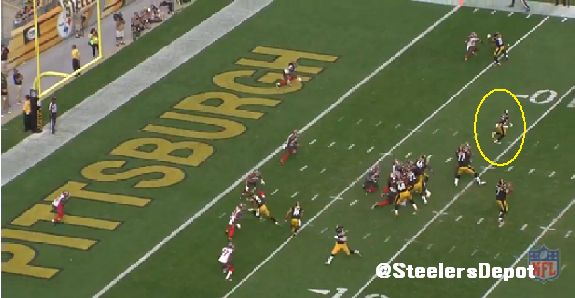 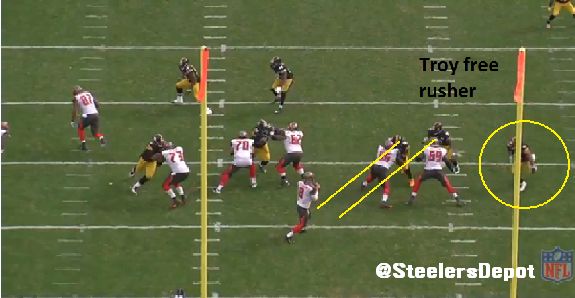 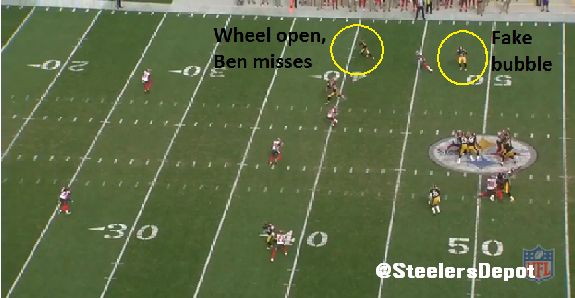 – The “look” Big Ben refers to on the pooch punt likely has to do with the 2×2 stack at the bottom of the screen. If there’s off coverage, Ben can throw it. But the Bucs have the corners rolled up so Ben decides to punt, although a Marcus Gilbert false starts never lets #7 do so. 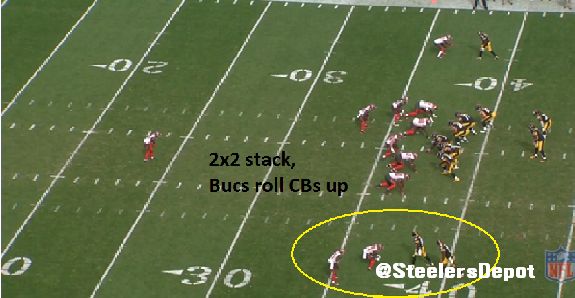 – Maybe this was some sort of scrape between Cameron Heyward and James Harrison but there’s no backside contain on this end around. Goes for 19. 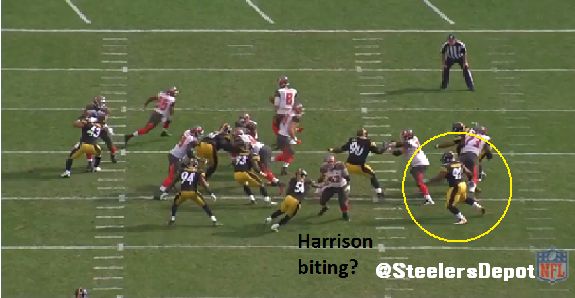 – Like the angle and the closing speed Mike Mitchell shows on this tackle. Only a gain of five.

– Tampa Bay runs a divide concept. Post and a nine. Designed to stress the safety. Mike Glennon hits the receiver on the post. Complete for 31. 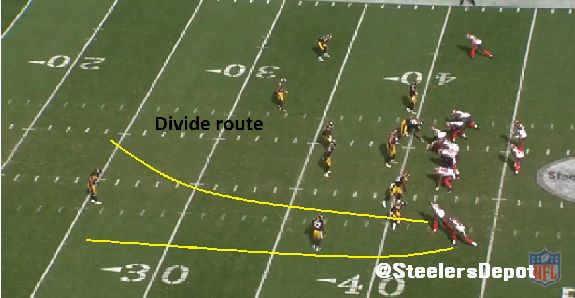 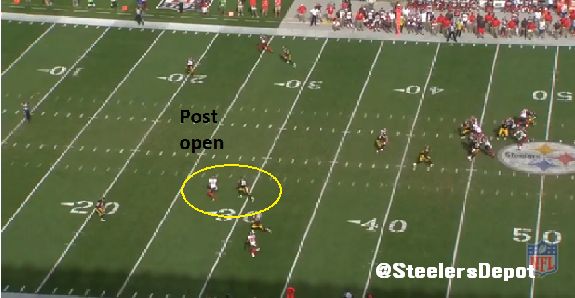 – For whatever reason, the Bucs run to the weakside of this unbalanced line. Arthur Moats easily sheds the tight end and makes the stop. 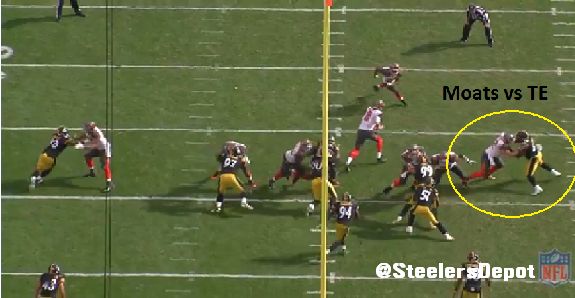 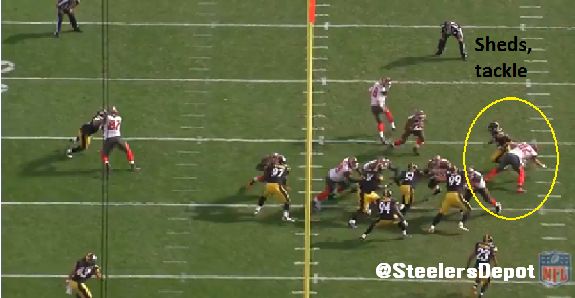 – One man route, Antonio Brown, on the flea-flicker. All or nothing play. Should’ve been six Ugly drop. 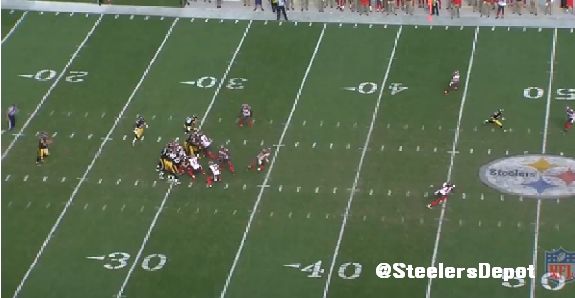 Don’t forget Ben overthrows AB on what could’ve been another six points on 3rd down of that drive. 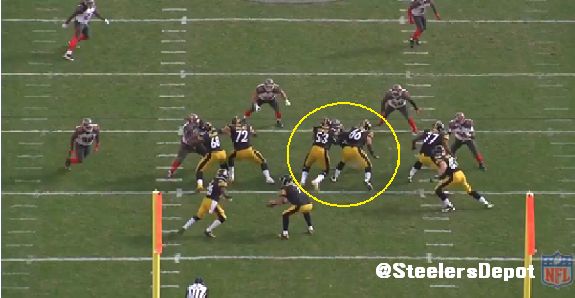 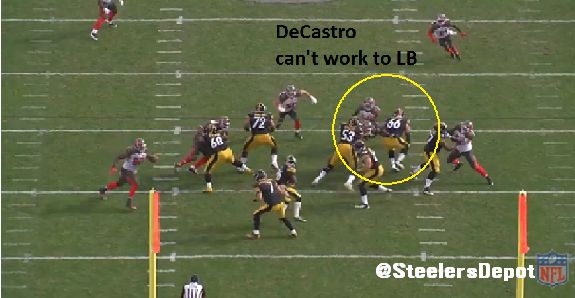 – Trail of bodies Le’Veon Bell leaves in his wake. Look out, NFL. 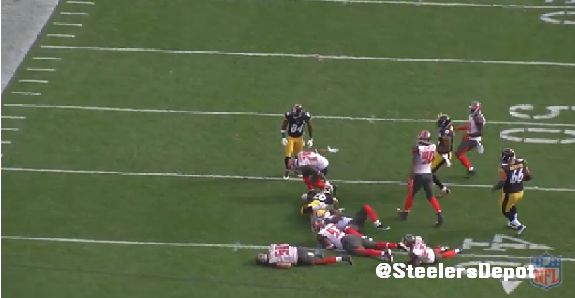 – Maurkice Pouncey showing the combination of his IQ and athleticism. Locates and picks up the looper, keeping the pocket clean. 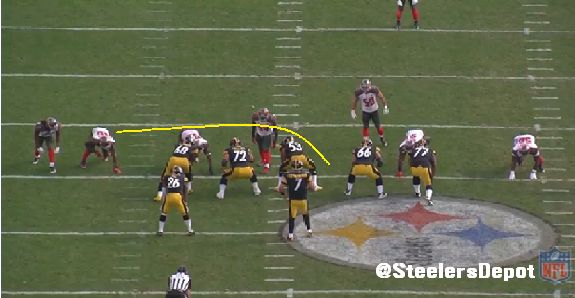 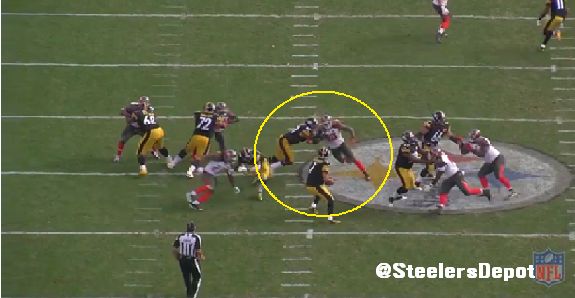 – Cam Heyward dropping into coverage for the second straight week.

– Lawrence Timmons a half second from getting to Glennon, who fires the ball away en route to a 21 yard completion. So close, so far away… 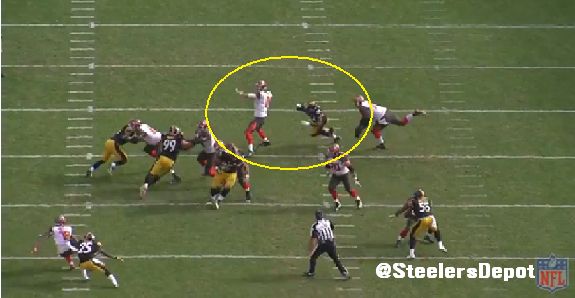 – Moats also a step late. The Steelers got some pressure. Glennon just did a nice job of getting the ball out quick and the Steelers were just a little late in a lot of cases. 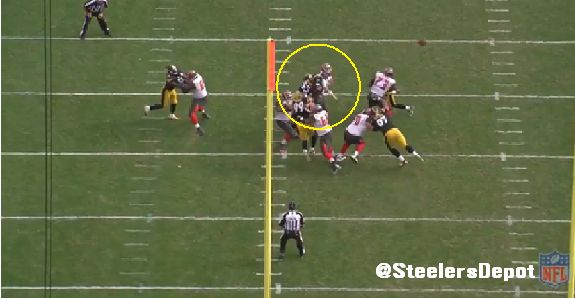 – 3rd and 5 packaged play. What I’m really curious is why David DeCastro doesn’t fire off the ball like it’s a run. Gets pushed back and Bell forced to run laterally. Backside tackle makes the stop. Weird.

– Jarvis Jones wearing a black sling on that injured wrist. 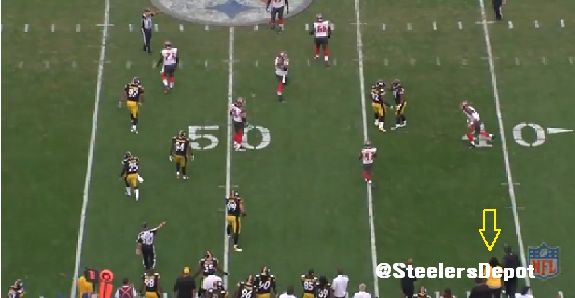 – Game winner. Vincent Jackson runs a slant, a common route near the goalline. Turns into a jerk route as he runs away from Gay and makes the catch. Very difficult to defend. 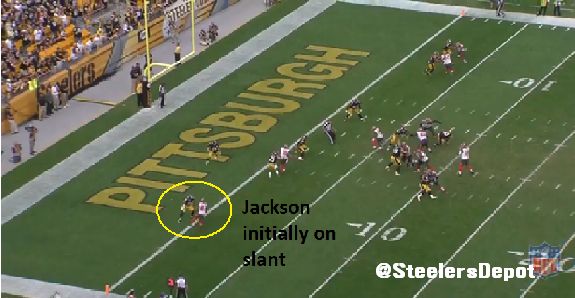 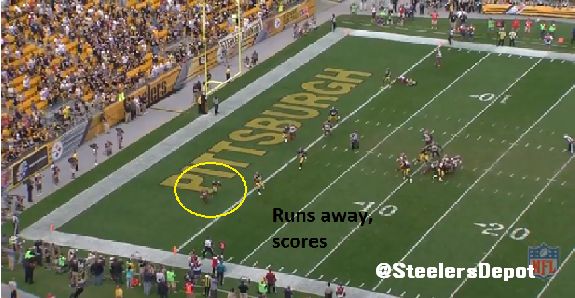