Membership numbers of the Steve McLendon Is Not A Nose Tackle support group may have taken a hit following last Thursday’s loss by the Pittsburgh Steelers, who fell 26-6 to the Baltimore Ravens in a game in which the second-year starter was most certainly the defense’s best player.

Suffice it to say that the Ravens’ running game was more well-managed with him on the field than with him off it, regardless of what personnel package the Steelers were in, as Cam Thomas also logged a healthy number of snaps in the interior.

McLendon’s game was not one-dimensional, however, as he did manage to get penetration a time or two around center Jeremy Zuttah in the passing game as well. This example was on the Ravens’ first offensive snap of the game.

Although Joe Flacco got the ball off with little incident, McLendon was able to drive Zuttah back and hand-fight his way into the backfield. A less expedient throw could have resulted in a hurry with such effort. 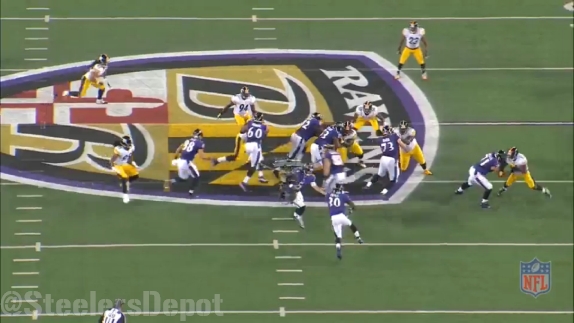 Of course, he didn’t win every battle against Zuttah, a player the Ravens traded for in order to improve a center position that was in dire straits a year ago. This running play later on their opening drive is an example of that. The offensive line flowed right, McLendon flowed with them, and then Zuttah was able to seal him off as the run wound up going off left tackle, considering the shift.

Still later on the same drive, McLendon managed to get the better of his counterpart for a run stop that exhibited his power, athleticism, and awareness. After absorbing a chip from the left guard, McLendon was able to beat the center and actually flow down one gap in order to make the tackle on Bernard Pierce.

It must be noted that Zuttah’s performance on this play was also influenced by his banging feet with his right tackle, which got him off-base and allowed McLendon to take advantage of the opportunity to toss him aside.

The nose tackle was able to score a true victory over the center in the passing game on the Ravens’ first play of the second half. This play goes down at least as a hurry in my book regardless of how other resources might have categorized it.

Zuttah resorted to grabbing on to McLendon’s jersey nearly from the snap, but the nose tackle eventually managed to dip the shoulder and get past him, getting to the quarterback and forcing an incompletion. Better still, he managed to draw a holding penalty on the center. 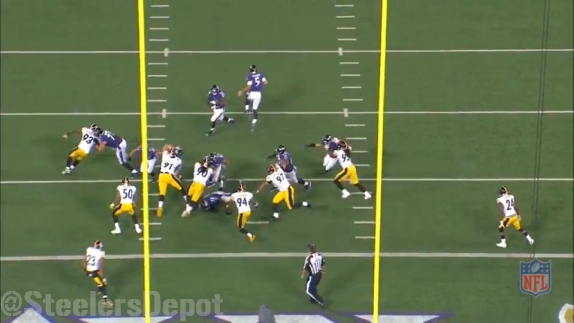 Finally, here we get a look at McLendon in a goal line situation, but the element of this play that I would most like to emphasize here is his awareness, demonstrating that he’s been listening to Chris Hoke, who taught him now to navigate his feet around a chop block.

That is what the Ravens tried to do to the nose tackle here, but as you can clearly see in the screen cap above, McLendon was able to deftly shift his lower half around the low block from the left guard while staying engaged with Zuttah, flowing to the ball and nearly making the tackle himself while plugging his gap. He played it exactly as a nose tackle should.