The Pittsburgh Steelers were able to get a nice, long look at their rookie offensive lineman, Wesley Johnson, over the course of the past month during the preseason, but perhaps not entirely in the manner in which they planned.

Part of Johnson’s draw for the Steelers is his ability to play all five positions along the offensive line. He played all over the line during training camp practices. But in all four preseason games, the only position that he filled was at center.

Part of that was due to injuries, most notably the injury suffered by backup center Cody Wallace. As a result, for example,he was forced to play every snap of the Steelers’ preseason finale against the Carolina Panthers.

It was a rather mixed performance for Johnson—one of those games in which he struggled in one area while performing well in another. Most notable was his early struggles in pass protection, which is an area in which he’d done just fine during the preseason before this game.

But he had a tough time holding off the pass rush of the Panthers’ defensive line. Of course, it’s worth mentioning that he fared better in the running game, but that will be a topic for a separate article.

Not surprisingly, this was probably the most glaring mistake of the night. It came on the first play of the Steelers’ second drive, which resulted in a nine-yard sack, and very nearly a safety, right off the bat.

Johnson was facing defensive tackle Kawann Short on the play. While Ramon Foster was initially shading to his side, he quickly turned to help Kelvin Beachum. Short got inside of his shoulder pads and easily ripped past him, pushing Johnson stumbling upfield. 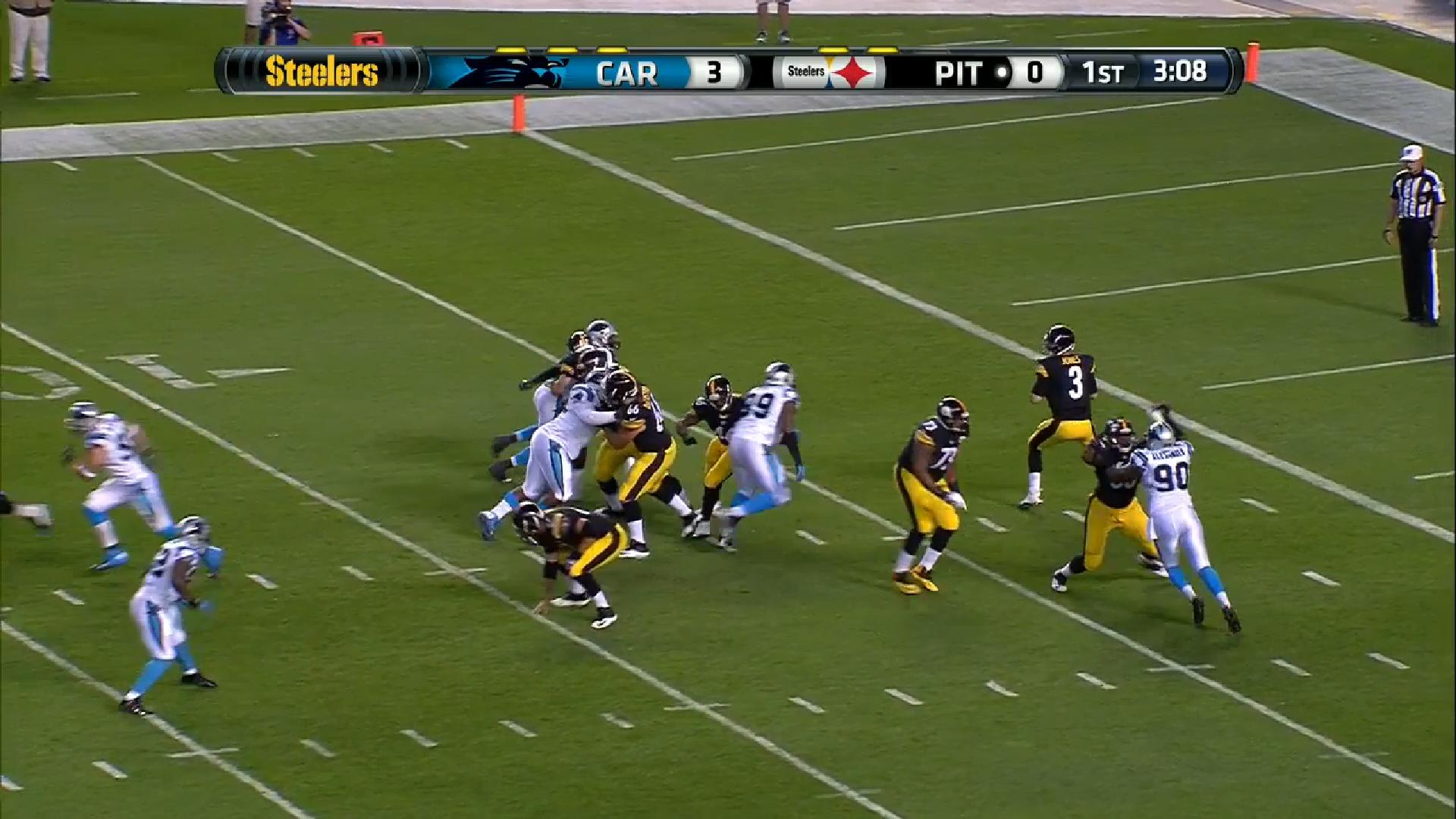 About a second after the snap took place, with him falling forward, there’s actually a point in which Johnson has his hand on the ground attempting to balance himself, exactly on the 10-yard line. It looks as though Johnson never moved, and was such a great source of amusement to me that I felt it necessary to provide a screen grab.

Johnson’s third series in the game ended no better than the second one began. Off the snap, he was beaten by Casey Walker cleanly with a rip move around his right shoulder, knocking his arm down and registering another sack right up the middle for the Panthers.

On the second play after the Steelers recovered a fumble and gave the offense good field position, Johnson was beaten again off the snap by Walker, forcing the center to hold on. He wasn’t the only offensive lineman holding on the play, but he was the one flagged.

Early in the fourth quarter, Johnson nearly sent the snap over the quarterback’s head, as the Panthers did back in the first half, but he was able to snag it out of the air. The disruption of rhythm likely contributed to him being forced to break down and scramble on the play.