The Pittsburgh Steelers controlled most of the game against the Carolina Panthers at the point of attack. That is to say that the Steelers’ offensive line had a good day against the Panthers’ front four. Leading the way toward that end was the right side of the line, in particular third-year right guard David DeCastro.

On the Steelers’ second play of the game, DeCastro pulled to the left and found his target, linebacker A.J. Klein, whom he drove back and unceremoniously deposited into the ground, blowing him out of the hole. Le’Veon Bell followed through the hole for 11 yards. 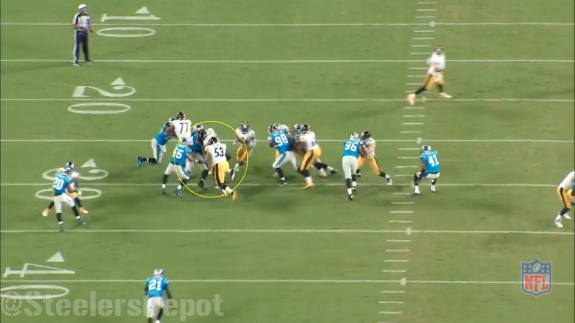 Two plays later, DeCastro opened up another hole for Bell to punch through after he drove Colin Cole off the ball and turned him out of the gap. Cody Wallace struggled to reach block on Star Lotulelei, understandably, so the right guard’s creating space was crucial for this carry going anywhere.

Late in the first quarter, DeCastro was straight bull rushed by Lotulelei on the play on which Ben Roethlisberger was sacked. Kelvin Beachum tried to push Mario Addison around the pocket, but with the pocket collapsed in front of him, Roethlisberger had nowhere to turn to, and the end was eventually able to climb into the play and drag him down. 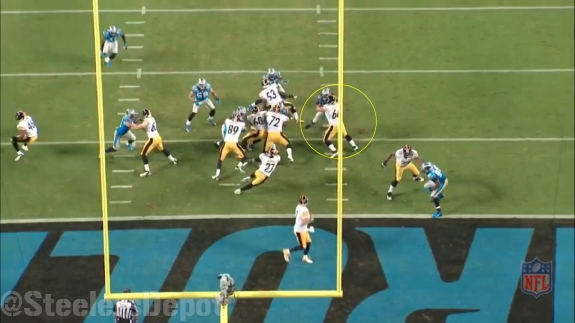 Early in the third quarter, the Steelers were backed up deep in their own end, facing a second and 13 on the three. DeCastro down blocked on Cole, sealing him inside. With Marcus Gilbert occupying the wide-rushing end, LeGarrette Blount was given a huge alley to plow through for the first down.

Later on that drive, with the Steelers creeping up on the red zone, DeCastro took advantage of Dwan Edwards playing the outside shoulder, pushing him out of the hole and easily sealing him to allow Bell a clear path to a first down

Unfortunately, he lost control a bit late in the half as he tried to stick up for his teammate, Justin Brown, after Panthers linebacker Luke Kuechly tried to prevent him from getting up in order to waste more time.

DeCastro saw this and rushed into the action to separate the linebacker, who sold the contact and fell to the ground to draw a personal foul call. Still, you like to see him stick up and get physical like that. He and Maurkice Pouncey should be this team’s enforcers on offense. 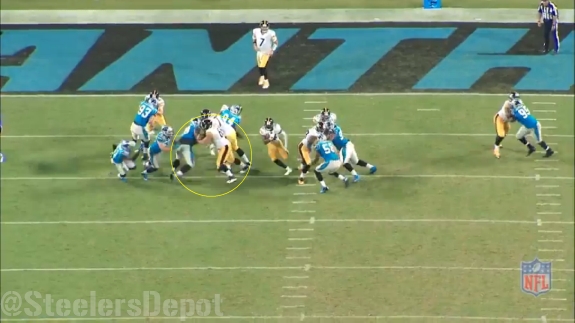 And would you believe it, the biggest play of the night was once again sprung by a DeCastro block. The Steelers were once again backed up deep in their own end, on second and 22, when he and Gilbert sealed Lotulelei out of the gap. With Pouncey sealing the opposite side, the line gave Bell as big a gap as you’ll see against the Panthers, which he burst through for 81 yards.

In the fourth quarter, facing a third and four, DeCastro perfectly diagnosed the Panthers’ tackle-end stunt, picking up Charles Johnson as soon as he began to cut inside. The tackle Edwards was a couple steps behind, which allowed Gilbert to double team on the end as he waited for the tackle to loop around.

This is the Pro Bowl-worthy play that we saw several glimpses of last year, and which had seemingly lain dormant for most of the first two games of the season. If he picks up in the next game where he left off here, there’s no reason to think he won’t end up with honors at the end of the year.