A short scouting report of the Carolina Panthers based on what I saw from them in their Week Two 24-7 victory over the Detroit Lions. Keep in mind it was just one game and a little bit of knowledge is a dangerous thing to hold. So some more general thinks I saw schematically that will likely be seen tonight.

– We’ll start with something fairly obvious. Despite some inconsistency with his hands, Kelvin Benjamin is clearly the team’s best weapon.

He isn’t just running a bunch of nine routes either. The majority of his routes appear to be the top of the route tree but he’s run a ton of corner routes, including in the red zone. Had one target that fell incomplete.

This is a simple nine route with an outside stem with Cam Newton throwing backside but look at the catch radius from the rookie. Hauls this in for a 26 yard completion. No one can cover that. 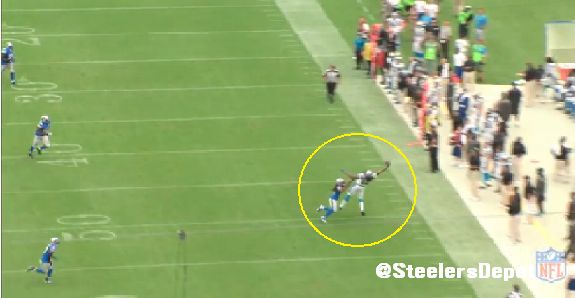 – Like what Dave Bryan mentioned on the podcast, the Panthers’ offensive line doesn’t jump out at you. Rookie right guard Trai Turner is a sub-par athlete who struggles to reach the second level. Also seems to struggle moving laterally in pass protection.

– Jonathan Stewart has had trouble staying healthy but he’s a powerful runner who is capable of breaking tackles. Had some hard runs against the Lions even if the final numbers (15/37) don’t reflect it.

– Tight end Greg Olsen has 19 targets and 155 yards through two games. Steelers have had trouble stopping tight ends. He could be a thorn in the defense’s side.

– Not that the Panthers are unique in doing this but they run combination routes of an underneath flat receiver with a deeper crossing route. An attempt to get the linebacker to widen and create a window for the dig. 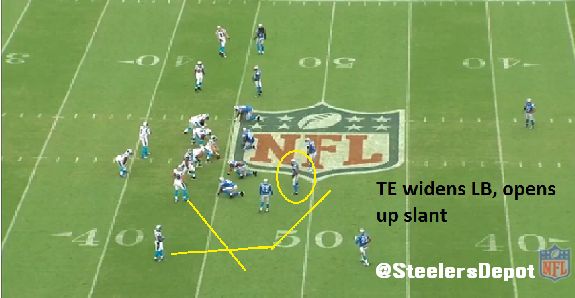 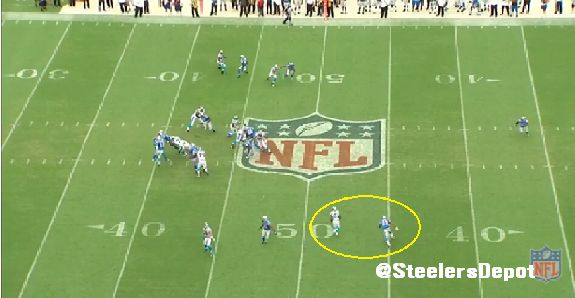 – What appears to be the Panthers “gotta have it” play on third down. Pin route, a two receiver combination with a post and a dig. Designed to stress the safety. If he carries the post, throw the dig. If he bites on the dig, throw vertical to the post. 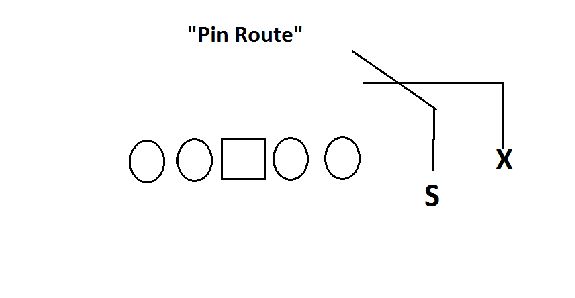 And here it is in-game with the routes inverted. Complete on the dig. 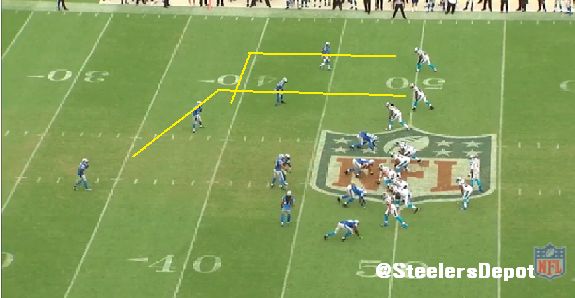 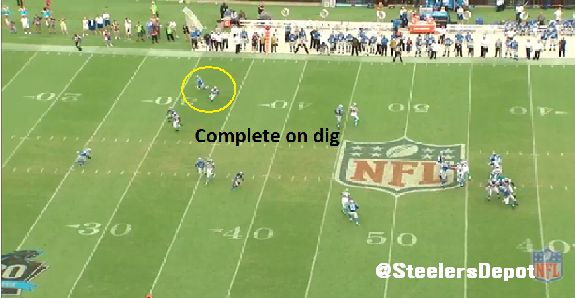 – Although they aren’t a blitz heavy team, they will sugar the “A” gaps throughout the game., bringing both ILBs over the “A” gap pre-snap. Often will drop out of it but rush just enough that offenses must be honest and respect it.

– What they seem to run a ton are T/E stunts. For example, on the Lions’ final drive before the end of the half, the Panthers ran some variation of a twist on four of five snaps.

Stunt recognition and pickup was one of the chief issues with the line last year. Every practice in training camp, Mike Munchak spent dedicated time in stunt pickup. But the Steelers will be challenged.

The guard must have active eyes to find the looper, pass the penetrating DT off to the tackle, and reach the midpoint of the looper. Hands must move before feet. David DeCastro should excel here but this has been a problem point for Ramon Foster. He could give up a sack.

– The Panthers’ are a relatively passive team that have their safeties, and linebackers on obvious passing downs, play with a lot of depth. Keep everything in front and tackle the catch, similar principles to the Steelers.

– Coverage appears to be pattern read heavy. Zone coverage but when a receiver is in a defender’s zone, it becomes man. Looking at Lance Moore to being able to run away from that defender and settle down in soft spots in zone.

– Left cornerback Antoine Cason is extremely physical. Hard hitter who forced two fumbles in the first quarter alone. Antonio Brown will have his hands full when stalk blocking. Let’s see how he works off press coverage, too.

– The Lions did seem to have success running split zones. Panthers’ front seven tended to overpursue and susceptible to being sealed. Steelers run quite a bit of split zone. Obvious alert, but the Steelers align the pulling tight end off the line of scrimmage when they run it.