My final game notes of the 2014 preseason. Observations from the Pittsburgh Steelers 10-0 loss to the hands of the Carolina Panthers. 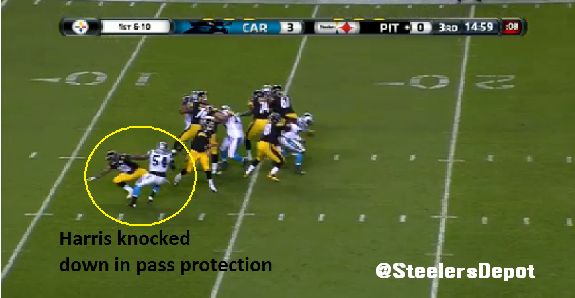 – Veteran play by Darrius Heyward-Bey on this run block. Safety walks down into the box at the last second so DHB cracks him. Those are your rules. Stalk vs two deep, crack vs single high. Forces the CB to be able to replace and support the run. He makes the tackle but I’ll take my chances against the corner than most safeties. 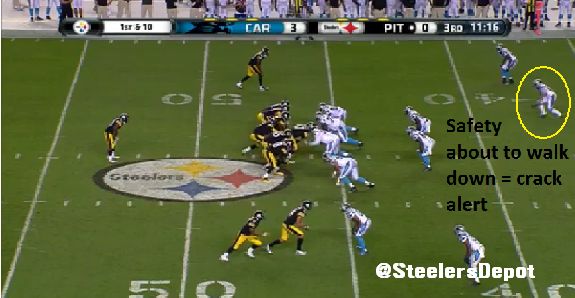 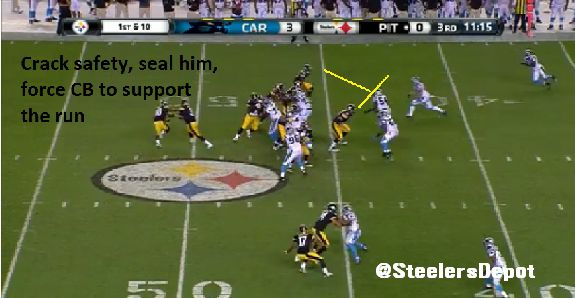 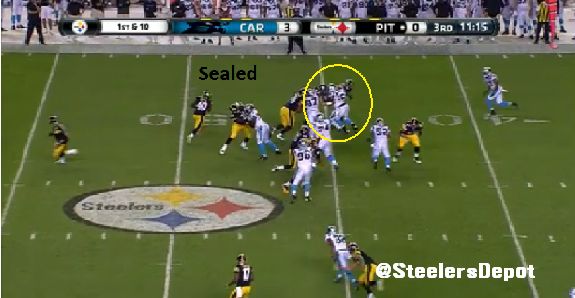 – Landry Jones does read the blitz and gets the ball out hot but the pass is thrown behind Derek Moye. Doesn’t let the receiver catch and run and the cornerback has time to close and make the tackle. 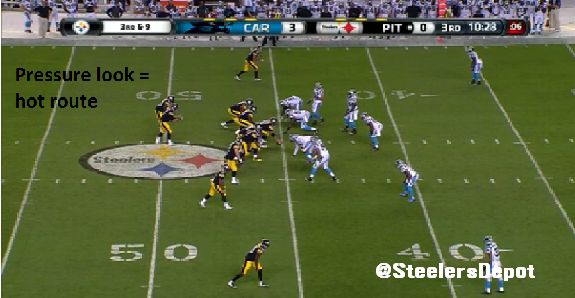 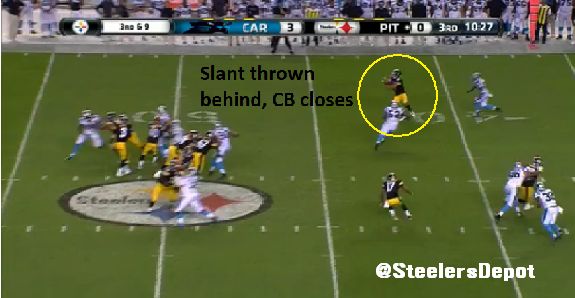 – Here’s Daniel McCullers reaching out with one arm to tackle Fozzy Whittaker. Advantage of weighing 352. 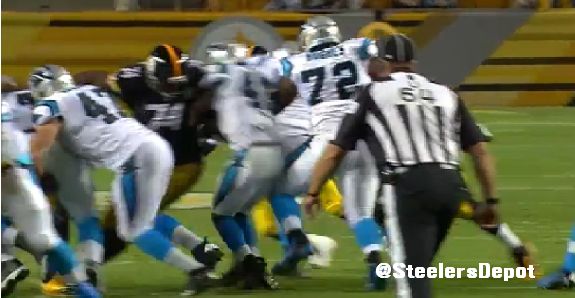 – No corner with this pre-snap cushion… 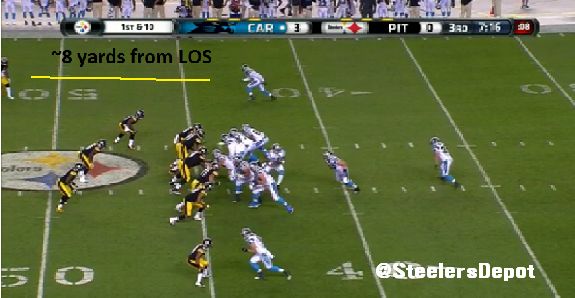 …should get beat this badly… 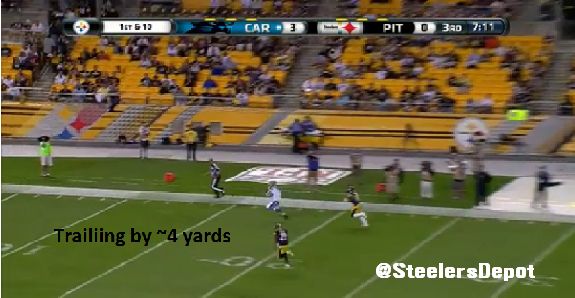 But Antwon Blake somehow did. Would have been six had the receiver not fallen down.

– Jones went to his second read very few times. And never stretched the ball downfield. Another uninspiring performance where he led the offense to zero points.

– Brendon Kay does have a windup in his release. 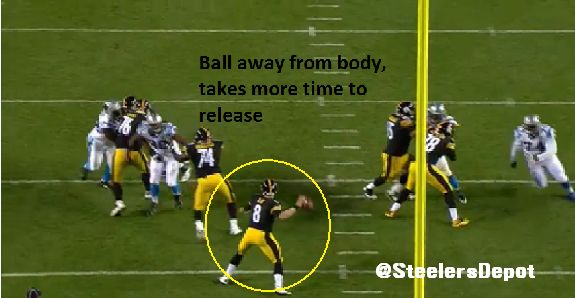 – Rob Blanchflower with a nice catch away from his body on a Kay boot.

– Stephen Houston took a cleat to the fact after being tackled in the backfield by linebacker Jason Williams. Ouch.

– Will Simmons allows a second sack on a missed T/E stunt. 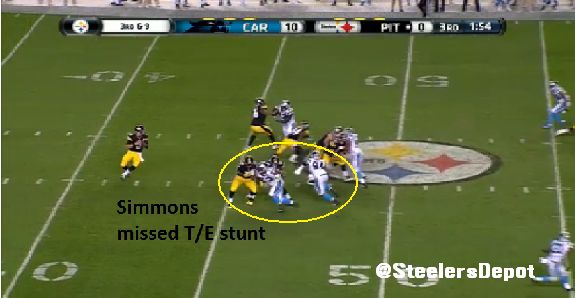 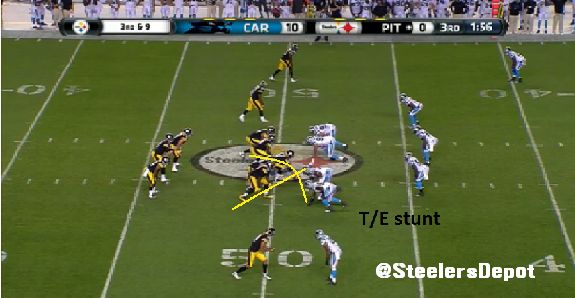 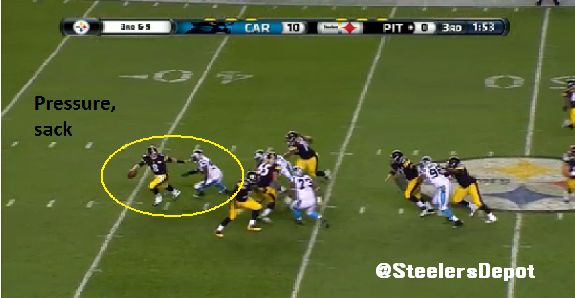 – With Vic So’oto gone, Howard Jones was inserted at LOLB with the third team. Chris Carter ran at ROLB.

– Don’t praise him very often but great hustle/chasedown by Carter to track Joe Webb down from behind on a 3rd and 17 run. Stopped him two yards shy of the sticks.

– Carolina’s first punt of the 4th. Dri Archer runs too laterally and loses three on the return. Get upfield, son.

– Graham Pocic came in for Simmons at RG on the first series of the fourth. But it was an ugly performance. On three of four consecutive plays, he drew two holding penalties (one declined) and fell to his knees in pass protection on another. Was replaced by Simmons on the next series.

– Camera shot is terrible but Blanchflower does a nice job of working to the second level, sticking to the back, and helping to spring Harris on a long run down the right sideline on 3rd down. 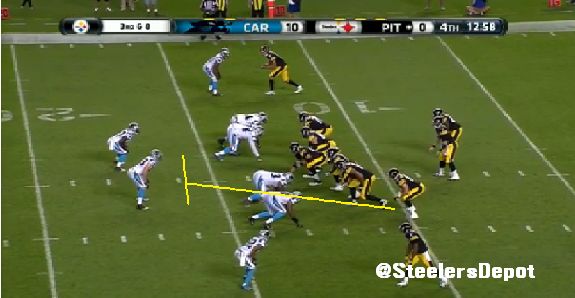 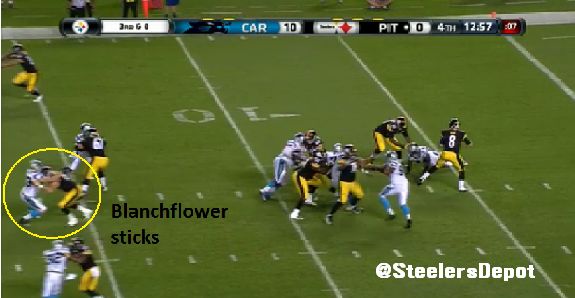 – Wesley Johnson did have a couple of high snaps, especially in the second half.

– From the sidelines, Joey Porter yelling at Jones after the UDFA ostensibly didn’t hold the edge on this run. 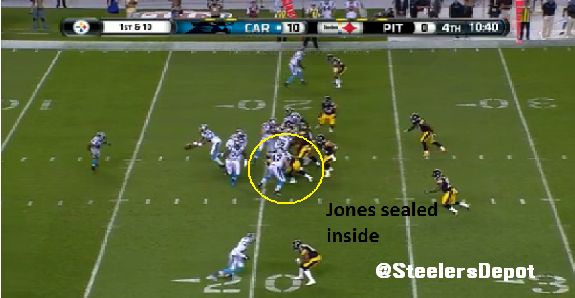 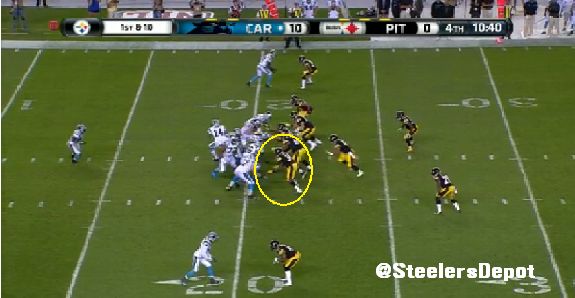 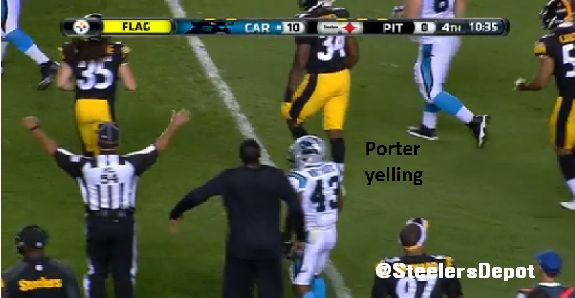 – Simmons’ first snap back in after replacing Pocic. Gets reverse pancaked on a bubble screen. Not pretty. 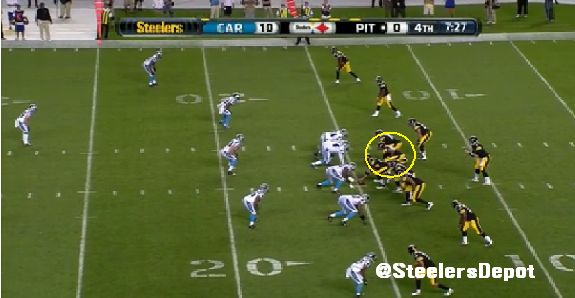 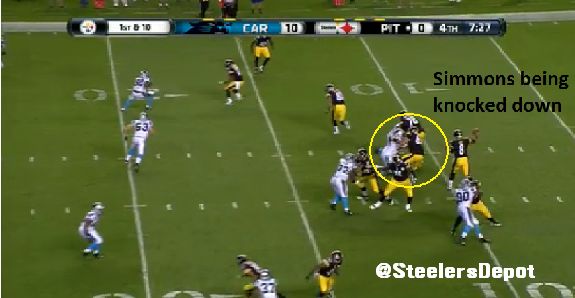 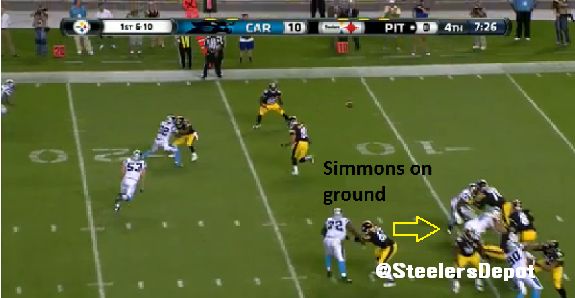 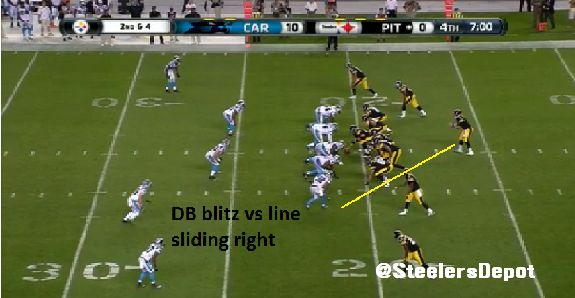 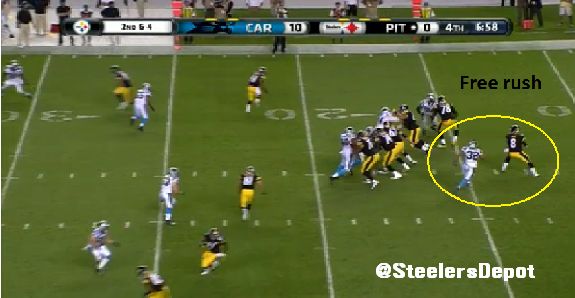 – Don’t like the positioning of Dan Molls here. Shamarko Thomas and Jones are spilling the run inside. Molls need to be over one gap so the back can’t cut upfield and gain a couple yards. 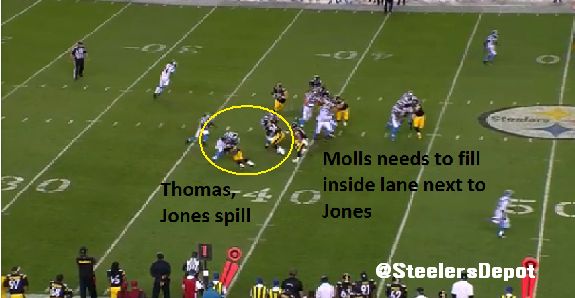 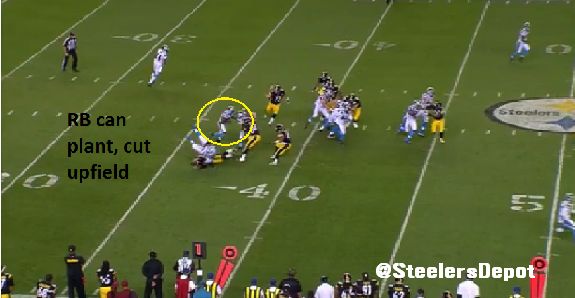 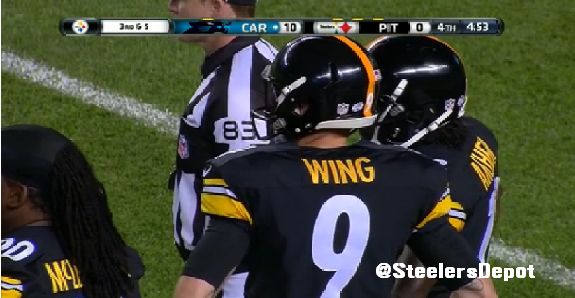 – McCullers turned. Never want to see the back of your numbers from the TV tape. 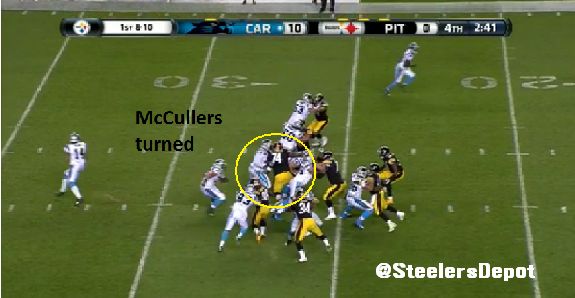 – The third missed T/E stunt by Simmons. What a terrible game for the rookie. Not the way to go out. 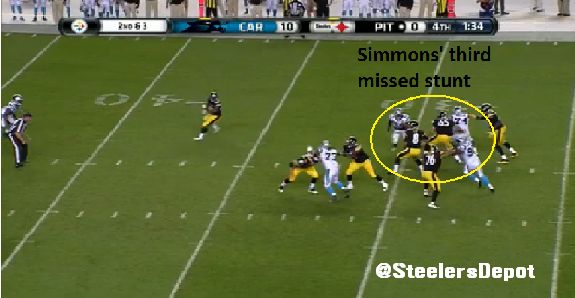 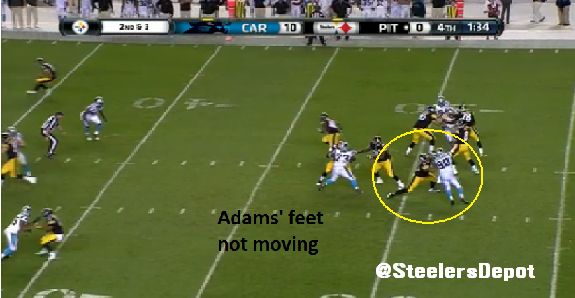 – Should Brice McCain miss any time, Heyward-Bey will definitely be active on Sundays. He’ll serve as the backup gunner and probably see some time at jammer as well. It’s been a crazy camp for him; from being on my roster to running with guys like C.J. Goodwin, to suffering a concussion, to coming back and producing, and finally carving at a role on the 53.

– Blanchflower has made some big strides in his run blocking the last two or so weeks. Doing a much better job of keeping his feet under him and sticking to his blocks. That was the player I saw at UMass.

– Guy Whimper had one of his worst games of the four. Adams was slightly better and settled in as the game went on.

– After Wesley Johnson had a miserable start to the game, he looked like the best lineman of the second team. Liked his willingness to finish his blocks.

– Despite four games, I really didn’t see much from Howard Jones as a pass rusher. I think everyone – myself included – overestimated his chances of making the team. I don’t think they were ever that good.

– I hope B.W. Webb can play in the slot? I assume he can. If McCain misses time, the Steelers will only have one true slot corner on the roster – William Gay. Shark could slide in there as he did last season.

– Back-to-back seasons a Steelers’ 5th round corner with knee issues failed to crack the 53. Terry Hawthorne last year and Shaquille Richardson this season.

– Will Allen was kept because he is the next man up at either safety spot. And even if you think Thomas should start at SS, Allen should definitely start over Robert Golden.

– Speaking of Golden, I’m not sure who the backup upback is on this team. Slim chance Golden gets hurt but no one else on the roster has a 2014 preseason snap there. Was thinking I’d see someone get reps Thursday but not the case. In a pinch, the Steelers would likely turn to Gay or Allen. They got a rep or two there early in training camp.

– Writing this while everyone is at the bar. I’m the worst at college, I’m pretty sure.