Game notes from the Pittsburgh Steelers’ 19-16 victory against the Buffalo Bills.

– Like last week, going to run through the special teams’ units at once. Harder to see them this week due to poorer camera angles and so many kicks out of the end zone, but it’s as complete as I can make it.

Carter would be pulled for Ryan Shazier on the next kickoff. Not the most promising sign especially considering Shazier had two tackles covering kicks.

– Starting kick return unit. Front five: Blake, Garvin, Carter, Thomas, Spence. David Paulson and Michael Palmer, as they were last year, were the next two men up. Cam Heyward, replacing the injured Will Johnson, and Cody Wallace made up the wedge. LeGarrette Blount served as Dri Archer’s upback.

Paulson and Vic So’oto served as the end protectors on the second unit.

– Looks like Sean Spence was pushed slightly down his gap on the opening kickoff, creating a lane for CJ Spiller to bust off a long return. Don’t want Shaun Suisham to have to make many tackles. Had too many last year. 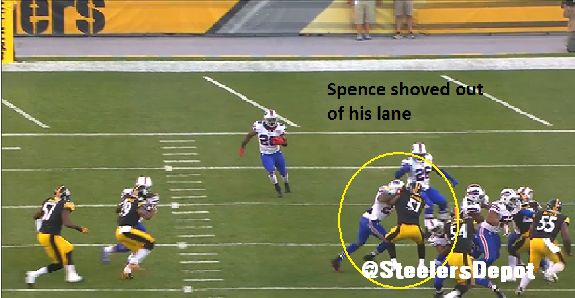 – The Steelers begin in their base against 21 (2 RB, 1 TE) personnel. Cam Thomas at LDE, Steve McLendon back at the nose, and Cameron Heyward at RDE. Chris Carter started the game at ROLB in place of the injured Jarvis Jones.

– When the team went into its nickel, Stephon Tuitt rotated in at LDE, opposite of Heyward.

– I tweeted out that although Ryan Shazier had a great game, Lawrence Timmons was even better when you go back and watch him. Throughout this first half, we’ll highlight some of his best plays.

– The first one comes early in the game. Here’s Timmons blowing through the block of Frank Summers – who might not be a refined blocked but occupies a lot of space – to make the tackle on Spiller. 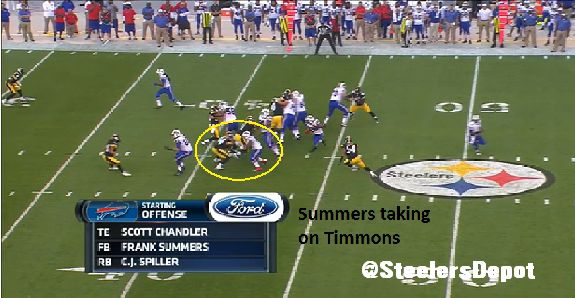 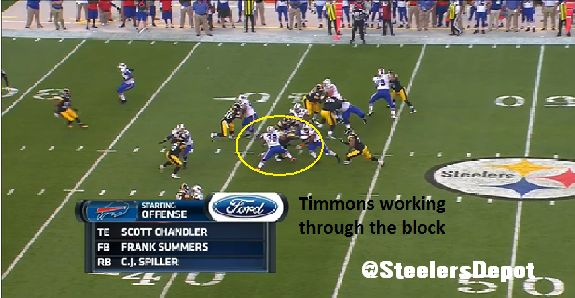 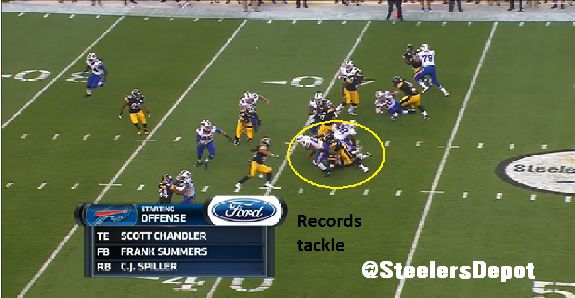 – Next one comes shortly after. Timmons on a run blitz. He’s the center’s responsibility but Timmons beats him through the line, the guard scrambling back to try and make the block. It’s too late. 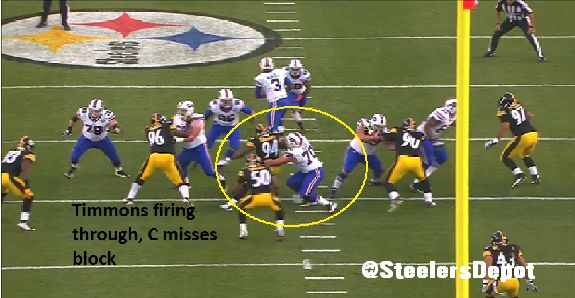 It forces Summers to have to bail the center out. The center and the fullback double-teaming #94. And like a nose tackle, it frees up the inside linebackers. Ryan Shazier, who the fullback was ideally going to base block, is now free. He darts in, forces the back to bounce the run, and makes the tackle. But it all began with Timmons freeing him up. 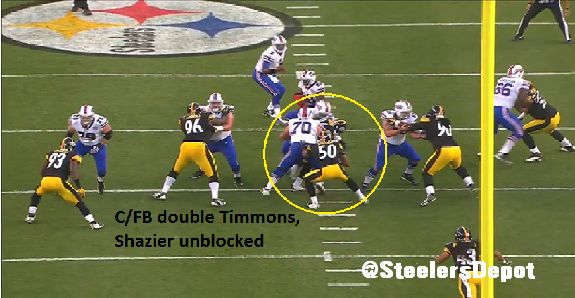 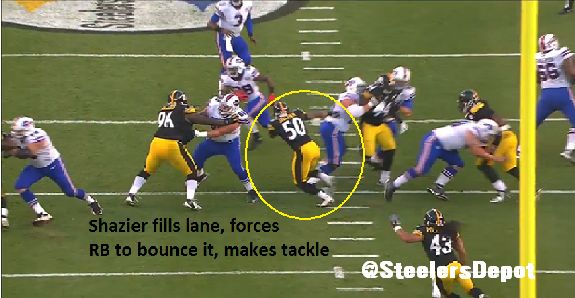 – Nice job by Cam Heyward to stay at home against this screen. Doesn’t charge at an angle, allowing a cutback. Once Fred Jackson does cutback, Heyward is able to close and wrap him up. Disciplined play. Cam Thomas also showed some hustle to chip on from the backside. 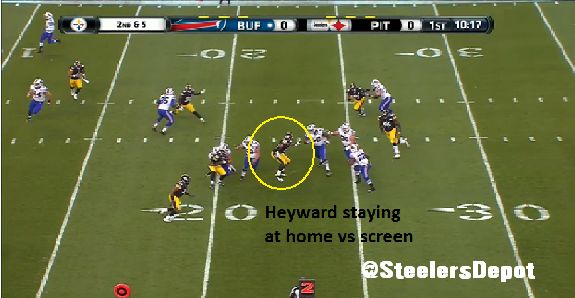 – The Steelers’ first snap on offense. It’s one of those packaged plays we saw the team run several times last year. Run/pass call at the line allowing Ben Roethlisberger which direction to go based on the front he sees.

Here, it’s a Power O draw with the option to throw a screen to Dri Archer. Roethlisberger chooses the latter and it picks up four. 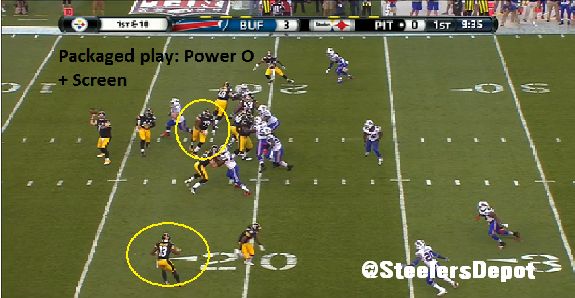 – Slant/flat combo on the Antonio Brown 76 yard TD. Empty set, Bell on the flat, Brown on the slant. The corner runs into the safety, creating a pick and easy separation. 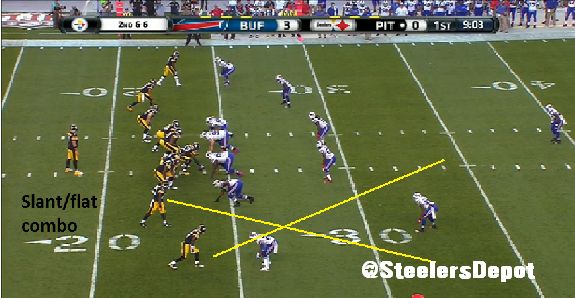 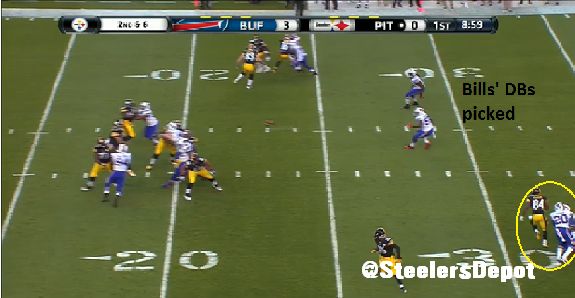 Last line of defense is Da’Norris Searcy, who is flat footed and stands no chance. Brown motors past for six. 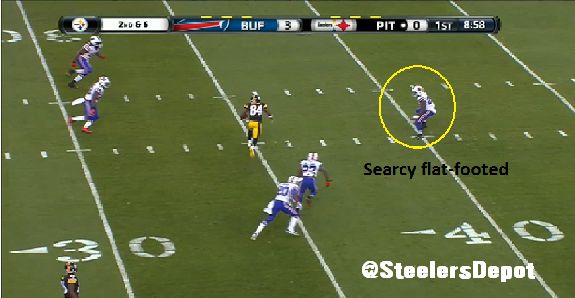 Saw someone tweet out the other day that football can be like baseball. Have to take advantage of those hanging curves. The Bills’ defense was a meatball pitch and the Steelers’ knocked it out of the park.

– Buffalo had some of their own issues trying to zone block. Three lineman work to the second level, one too many. Cam Thomas is free and makes the tackle. 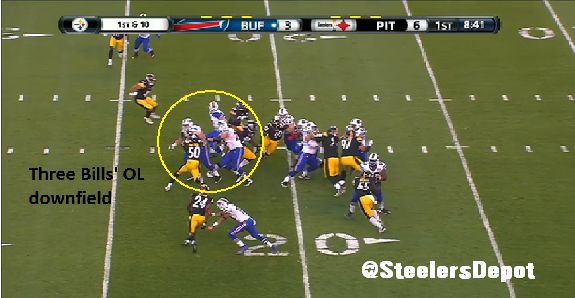 – On the Mike Mitchell penalty. Probably not far-fetched to believe he dropped a racial slur. League has a big crackdown on that this year.

– The Ryan Shazier interception. Two deep shell, letting Shazier play to the inside hip of the tight end and leap for the pick. Keith Butler claps after the play. Joey Porter greets him with a chest bump, before the ref tells him to back off.

– Really like this run by Le’Veon Bell on a day where positive runs were rare. Finds a running lane, jumps down one gap with the safety charging downhill, and then plants upfield to pick up six. Can see that new quickness from shedding a few pounds.

– Some of the Steelers first cut blocking on a zone run. DeCastro and Maurkice Pouncey cutting. 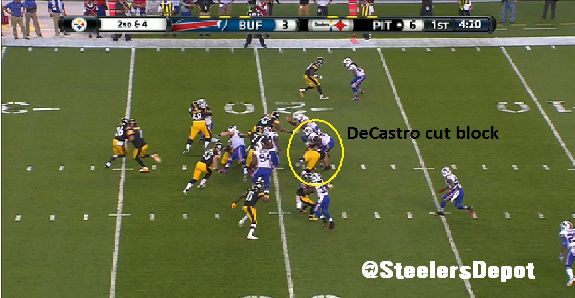 – Lance Moore appears to be slow to get out to the corner to block on this screen to Markus Wheaton. Wheaton never had a chance as the CB flies in immediately after the catch. My first through was that Moore needed to get in front of the cornerback to be able to stalk block.

But my next thought goes back to the “jerry-rig” comments Richard Mann made about blocking. Since guys like Moore aren’t reliable base blockers, its best to attack from an angle. Try to hit the inside shoulder and push the corner out of the way instead of hoping to stick to him face-up. It makes sense. Still not executed here but it explains why Moore was slow off the snap.

– What I loved most of Ben Roethlisberger’s touchdown to Markus Wheaton was his mobility within the pocket. Raved about it last year. Climbs the pocket, keeps his eyes downfield, and hits Wheaton in stride in the back corner.

Wheaton with a crisp route on the post-corner. Gets CB Stephon Gilmore to open his hips on the post and then separates as he cuts on the corner. Gilmore is left to trail and can’t make a play on the ball. 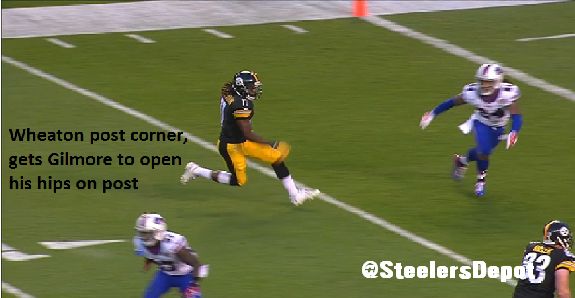 – Shazier’s second tackle on special teams came after he got off a block and flung himself into the return man. That was consecutive kickoffs where the rookie made the tackle.

– Brice McCain did have some early struggles on kick coverage. Pancaked on the opening kick and then couldn’t work off the block on the next.

– On the Bills’ drive that occurred late in the first quarter to early in the second, the Steelers ran multiple stunts with Cam Heyward looping over Stephon Tuitt.

– After Chris Carter started the game at ROLB, Arthur Moats played the next three series with the first team defense there, opposite of Jason Worilds. Moats has been getting plenty of looks there, as he should. He needs to be the top backup at both spots.

– Here’s Steve McLendon swimming over the very talented Eric Wood to flush EJ Manuel and force the incompletion. Pittsburgh has some big bodies up front that can get to the QB. Collapsing the pocket and being a successful defense usually are exclusive. 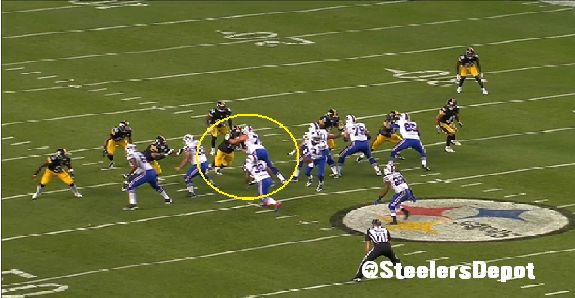 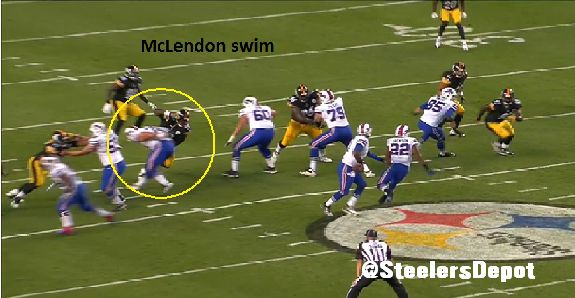 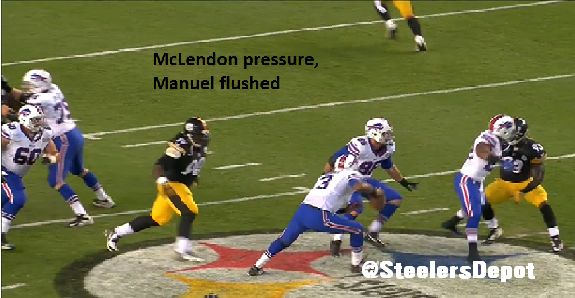 – Already been highlighted but worth mentioning in here. Stephon Tuitt ran a good 30 yards downfield to help tackle Scott Chandler on 3rd and 27. High motor.

– Here’s what I love to see and one reason why I was excited to see the team face a 4-3 squad. 3rd and 9 stunt picked up beautifully that allows Roethlisberger complete a curl to Antonio Brown.

T/E stunt from both sides. Picked up well and Ben has a clean pocket. 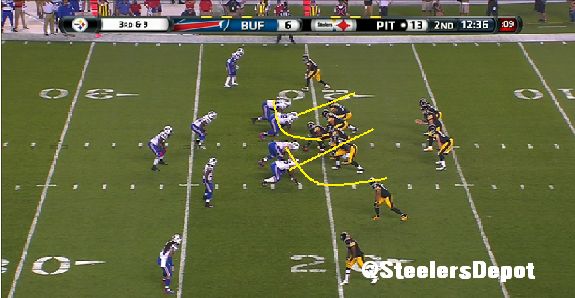 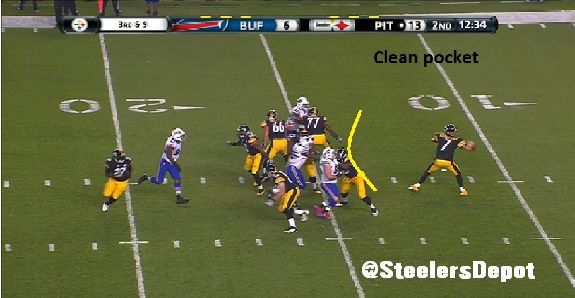 – Ran a toss to the left to LeGarrette Blount early in the second quarter. Haven’t seen either of those things – a toss or run to the left – in previous seasons. Know we’ll see a couple from Archer throughout the year.

That second to last punt was a pretty poor one. Lower liner. I’m sure Adam Podlesh is no longer a threat to Wing, but by no means has Wing locked this job locked up. I want to watch a game without any poor punts. That’s the standard.

– Camera misses the snap here, as they did many times throughout the game, but watch Shazier close on the ball, wading through the trash to tackle Fred Jackson. Here’s where Shazier is at as Jackson hits the lane. 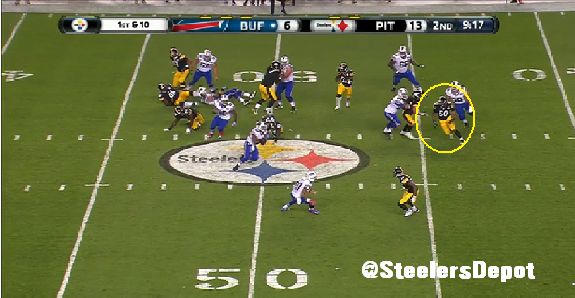 And then on the GIF, watch the rook close.

– Wish the team would’ve gotten the runner in the backfield on this occasion. Cam Heyward rushes through but can’t finish. Nor can Cam Thomas. What should be a loss goes for a short gain. One point of emphasis Mike Tomlin had in his post-game press conference. 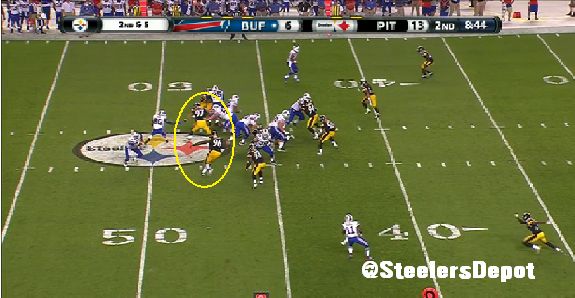 – Another “A+” play by Shazier. Works off the trap block of Doug Legursky and makes the tackle. We’ve seen the speed, now we’re watching him play in a confined space. 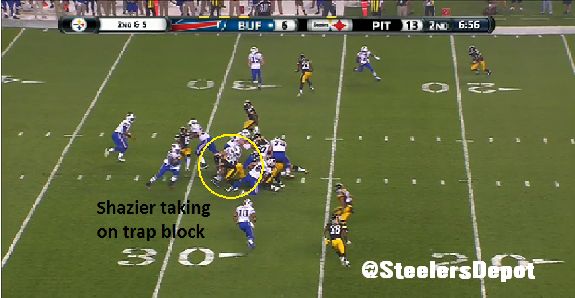 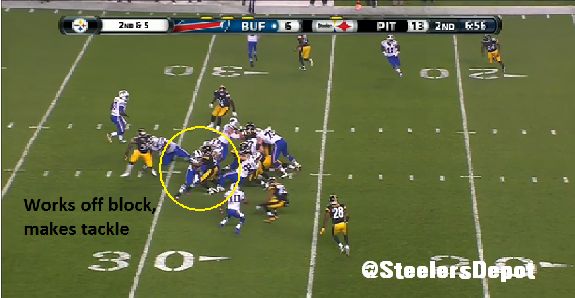 – Heyward’s deflection on 4th and 3. Again, working against Legursky, who got whopped in this game. Always beneficial by being four inches taller than the OL you’re working against. Offers a nice view of the QB.

– The worst part about Landry Jones’ interception? It’s empty set. He has four other options he can progress to. Locks onto Lance Moore from the snap and forces a throw. Has to go through his reads. Or at the very least, he has to lead Moore on the throw. The cornerback is playing trail, defending against those inside breaking routes.

– Second-team defense: Defensive line consisting of Stephon Tuitt at LE, Daniel McCullers at NT, and Josh Mauro at RE. Arthur Moats flips to LOLB while Carter is reinserted at ROLB. Vince Williams and Sean Spence the inside linebackers. Antwon Blake at LCB, opposite of William Gay. Shamarko Thomas and Robert Golden the safeties.

– In some nickel packages though, McCullers and Cam Thomas were the two down lineman.

– Mentioned this before. The one area McCullers must work on? Being able to absorb chips and blocks from an angle as opposed to head-on. He obviously has the strength and length to hold the POA against base blocks. But chip him and you can knock him off balance.

Not a run in this example but illustrates the point just the same. Third down where the right tackle chips. Knocks all 350 pounds of Big Dan, at left end, to the ground.

– At one point trying to jump ahead of Preseason Live ten seconds, the video fast-forwarded. The video slowed down back to normal speed but the audio didn’t. So I got to enjoy ten seconds of listening to Bob Pompeani and Edmund Nelson talk as if they just sucked in a bunch of helium. Or calling an old-timey horse race. It was wonderful.

– William Gay did a nice job of getting his head around to locate the ball playing the fade in the end zone. Refs won’t throw the flag if you’re looking for the ball.

Shamarko Thomas with a heady play even if it was a bit of a gamble. But you can tell he’s thinking pre-snap. 3×1 formation indicates the backside receiver is either going to be running a slant or fade. So he drives on a downhill 45 degree angle off the snap. If it’s a slant, he can make a play on the ball.

It ends up being a fade but I like the thought process nonetheless. 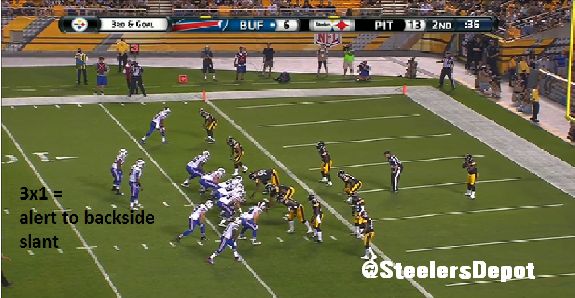 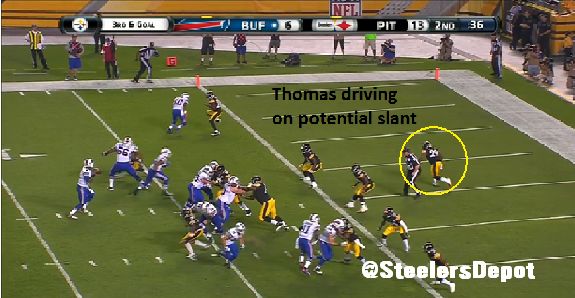 – Great play by Robert Golden to get a hand on the 4th and Goal attempt to Scott Chandler. Buffalo was trying to use Chandler’s 6’7 frame to box the safety out.

– The Steelers’ offensive line played the entire first half. Even the kneel down before intermission.