Using the All-22 Coaches Tape, here is an evaluation of new Pittsburgh Steelers safety Mike Mitchell. Beginning with individual game breakdowns and notes.

I watched five games of Mitchell in 2013. For each, I did a pre and post snap tally. Looked at the following categories.

Lining up in the box (gave some leeway here, generally anywhere near the line of scrimmage)

Lining up over a slot receiver

Under Zone (typically “Sky” coverage, responsible for the flats)

Robber (reading and reacting to the QB’s eyes)

Attempted to watch Week One but realized he was inactive that week with a calf injury. He had won the starting strong safety gig coming out of camp, beating out DJ Campbell and Haruki Nakamura. So I moved onto Week Two against the Buffalo Bills.

He saw his first snaps of the year on special teams, serving as a jammer mid-way through the second quarter. According to Football Outsiders, Mitchell saw 90 snaps on special teams in 2013. Not that he’ll be expected to play there with Pittsburgh but some added background information on him.

Started his first series with 5:15 left in the second replacing Quintin Mikell. According to head coach Ron Rivera, this was by design to help ease Mitchell back into action.

That plan was aborted when Mitchell moved to free safety when Charles Godfrey went down with an injury. Panthers’ secondary got hit hard in this game so he was asked to flip-flop throughout. Reoccurring theme for the year.

He was used fairly conservatively, playing a ton in the deep half of Cover 2. 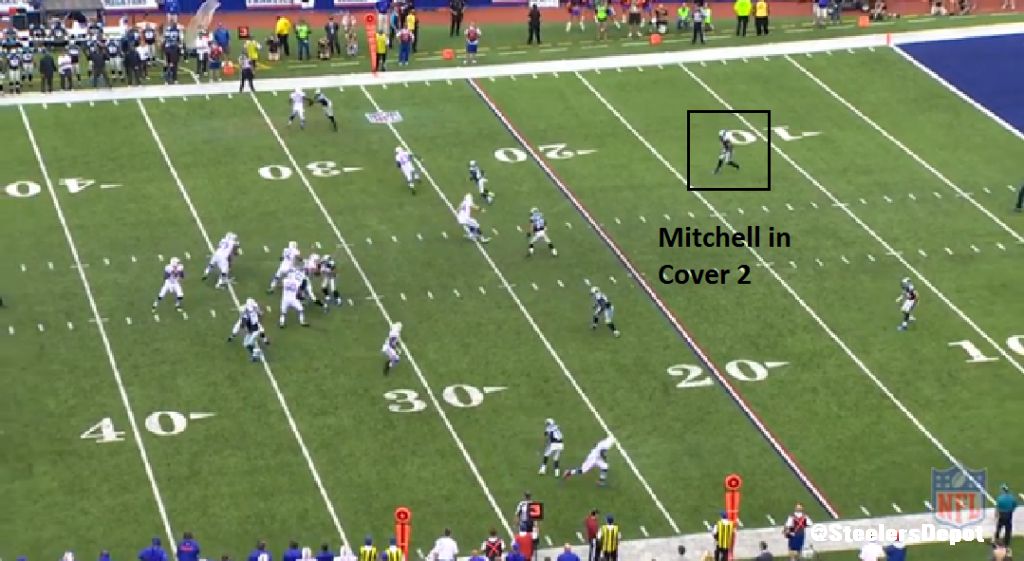 But also used in some “Sky” coverage, rotating down and covering the flat while the corner carried anything vertical. Mostly came at strong safety. 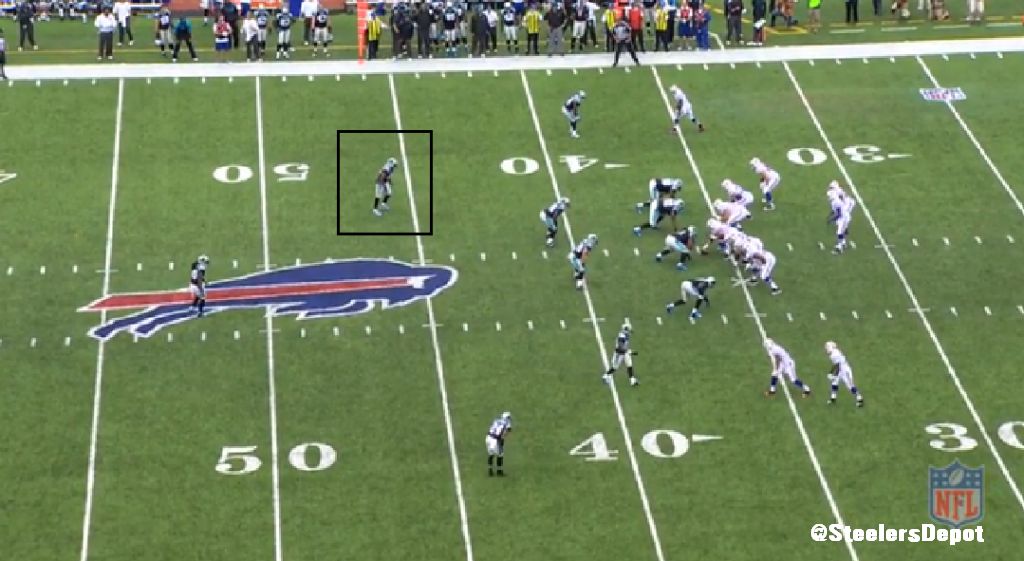 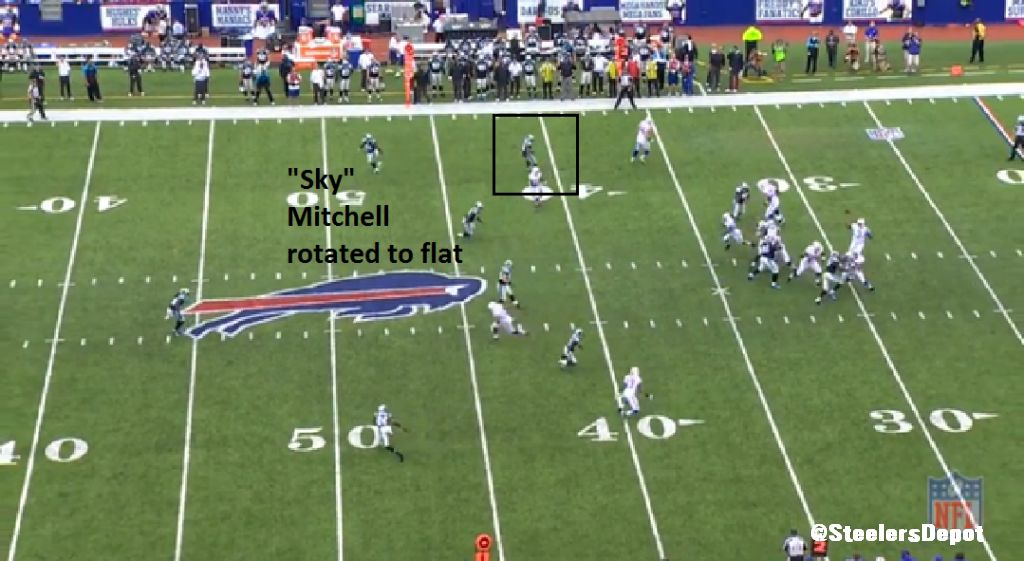 Did have a huge open field tackle against CJ Spiller. One of the toughest backs in the league to bring down.

But also had multiple missed tackles. Two by my count. Another theme that’ll be highlighted throughout the breakdown.

Flashed a big hit on 6’7” tight end Scott Chandler in the flats. Early on, showed that reputation for being a big hitter.

Made a lot of the calls in the secondary.

On the downside, there was an instance where defensive end Greg Hardy was staying step-for-step with him in pursuit mid-way in the 4th quarter. Hardy is a supreme athlete but it was discouraging to see. But Mitchell’s recovering calf injury could serve as an explanation. Seemed to grab his leg after here and there during the game.

Started at FS playing along undrafted rookie free agent Robert Lester. Because he was playing with a rookie, it seemed Carolina played Mitchell very conservatively. Ton of Cover 2 and some Cover 3 with Mitchell as the single high.

Young secondary, especially with Lester. Had to protect him. Vanilla defense from the Panthers. Two deep shell with only occasional rotation. At its most complex, sometimes the cornerback would roll up into the flats and you’d see quarter-quarter-halves. This conservatism led to a fairly nondescript game from Mitchell.

Did show quick feet and change of direction. Allowed one catch for 18 yards on two attempts. Incompletion was good coverage on Larry Fitzgerald in the back of the end zone. Ball overthrown but still blanketed him.

Picked off a pass at the goalline but it was a post route that Carson Palmer threw way too far in front. Mitchell had to dive but not that tough of a play.

Had another missed tackle, failing to bring down the less than elusive Rashard Mendenhall as he scooted to the right side. Called for a personal foul for a clear late hit out of bounds in a separate instance.

Just to clarify, there were a lot of instances where it was obvious Mitchell was going to be responsible for the deep half or middle even on run plays. Those were counted as “deep zones” even if there wasn’t a pass.

This week, Quintin Mikell started at SS with Lester coming in during the second series. Those two rotated throughout the rest of the game.

More aggressive against the run after looking relatively timid the two prior. Laid out running back Michael James in the second quarter.

Fiery, emotional player. Fluid athlete that was capable of covering a lot of ground in coverage. Able to get to the left sideline quickly after lining up near the LOS. Forces Mike Glennon to go to his next read and ends up being sacked.

Little more variety in his usage. In the box more, had two true pass blitzes, and lined up over the slot once.

In the box pre-snap here. Doesn’t do a whole lot more than absorb the lead block of Erik Lorig but it’s good enough. Frees up Thomas Davis to make the tackle. 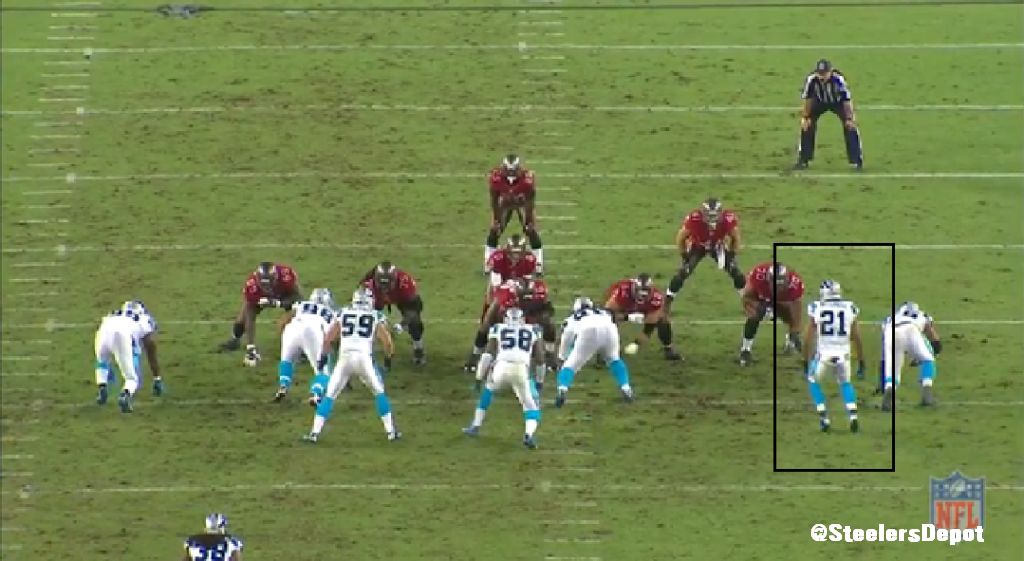 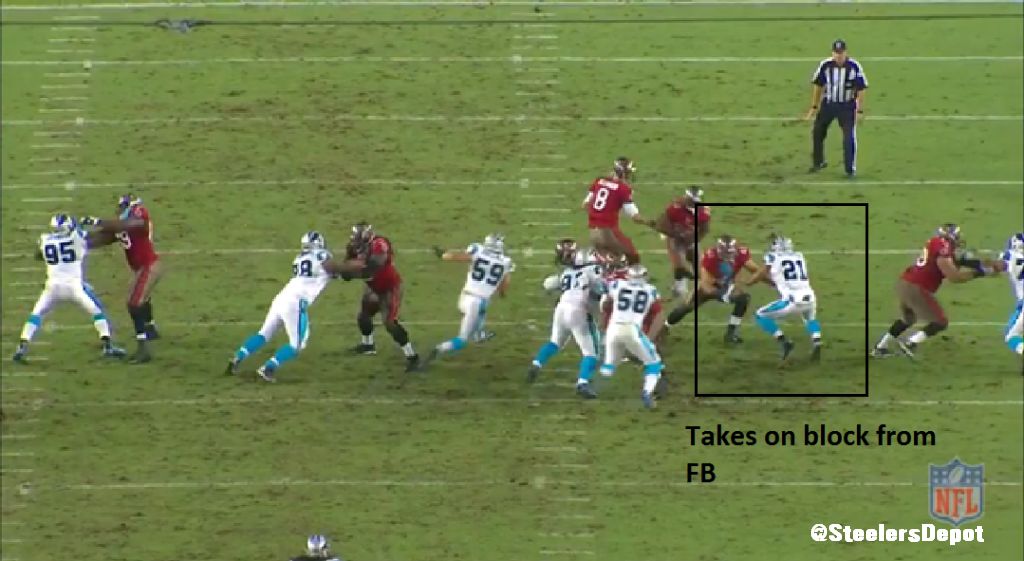 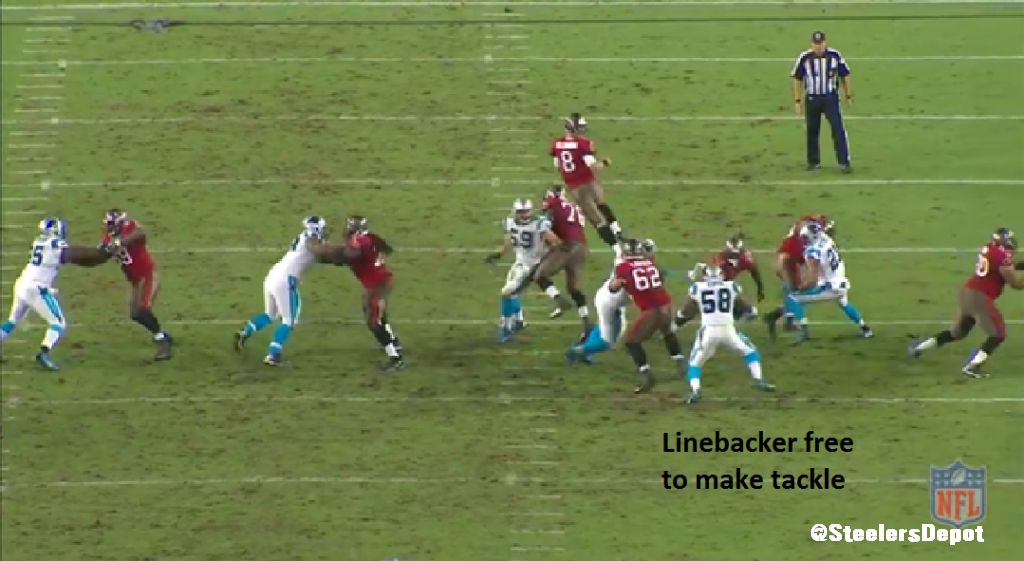 Still, played a ton of centerfield. Numbers a bit inflated though by Carolina going vanilla and conservative up big headed into the fourth quarter.

Again, Mikell and Lester rotating at SS. Mitchell forced to adapt to two different players. A veteran and undrafted rookie. As the man in charge of communication in the secondary, seemed to handle it well. Again, was in charge of the calls and adjustments vs motions.

Lots of Cover 1/3 with Mitchell as the single high safety. Carolina had him playing with a lot of depth. Playing 20-25 yards off the line of scrimmage wasn’t uncommon. 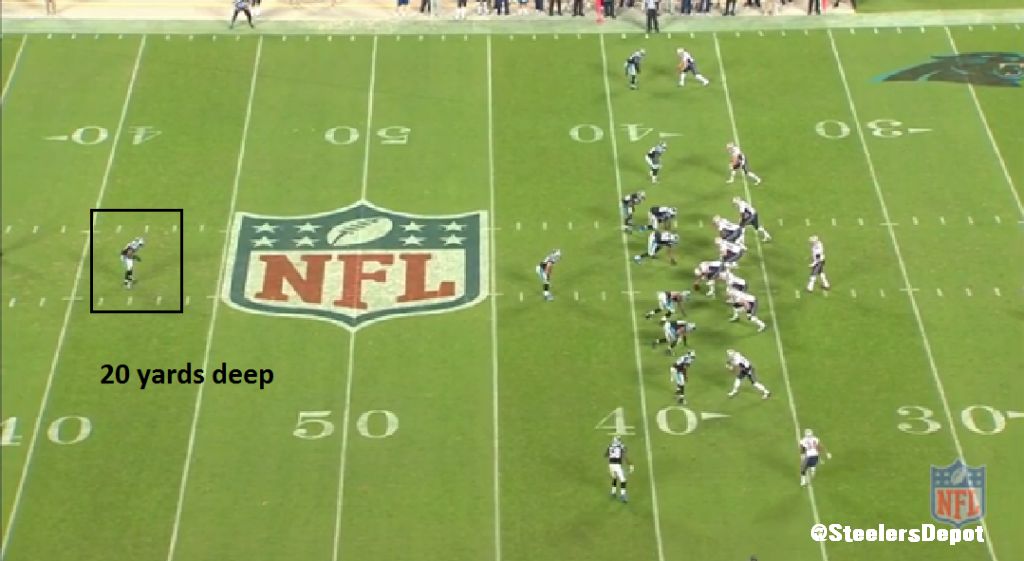 Really made him a non-factor against the run.

But there was more variety.

Cover 3 “Sky” with Mitchell playing in the flats below. 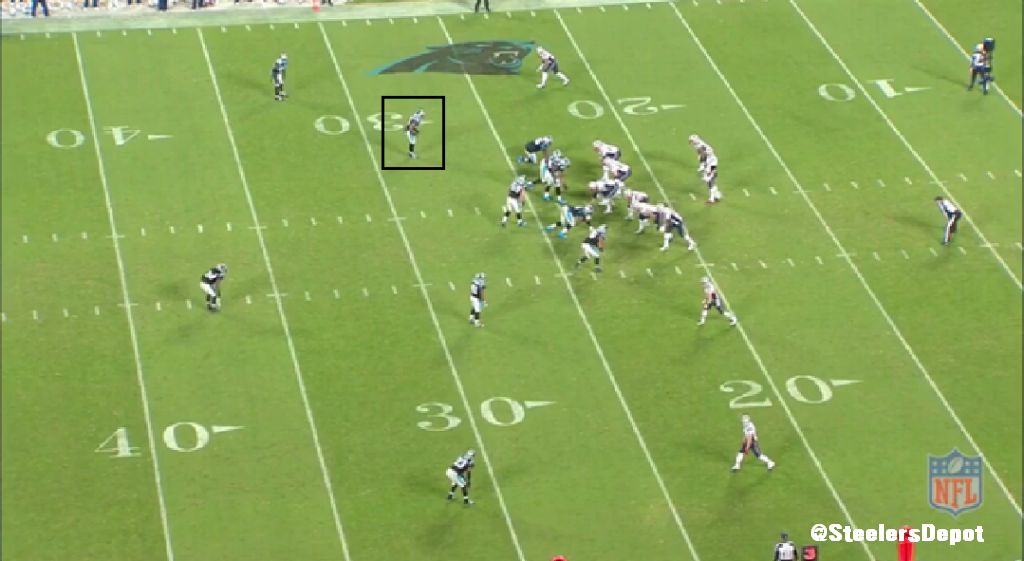 And lined up over the slot receiver in this next still. Zone coverage and dropped into the flat. 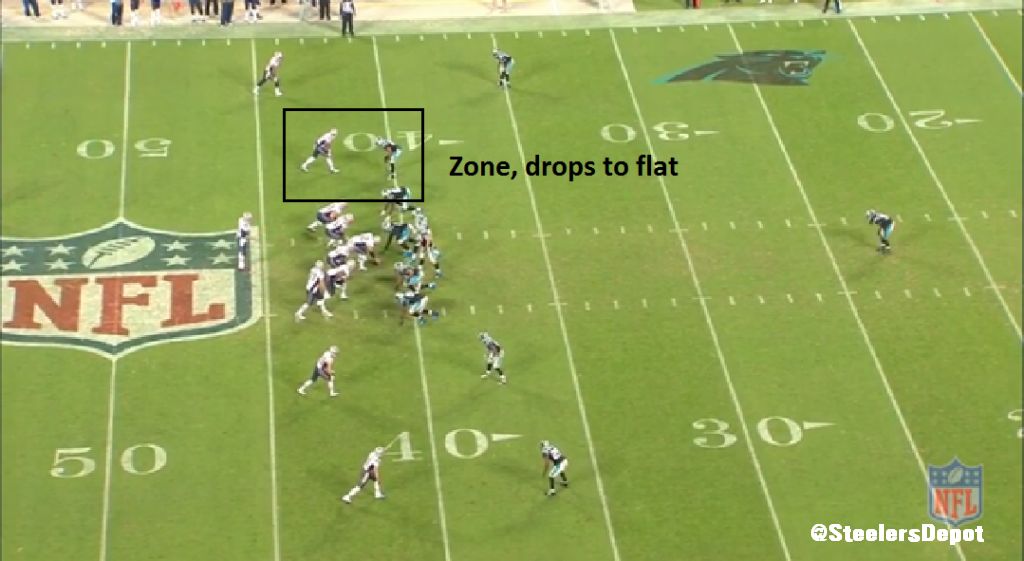 Carolina let him walk down to the LOS more often, playing in the box nine times. Blitzed four others, three of those coming in obvious passing situations. To that extent, finally letting him play outside of that vanilla bubble he was in early in the year. Eight times in the box and two blitzes in Weeks Two and Five combined.

Biggest complaint from this game was his angles. Poor routes to the ball and caused him to miss tackles. One costly one in coverage that nearly led to a touchdown.

Missed another tackle because of a poor angle late in the second quarter.

Missed a tackle in run support. Not low enough and bounced off. 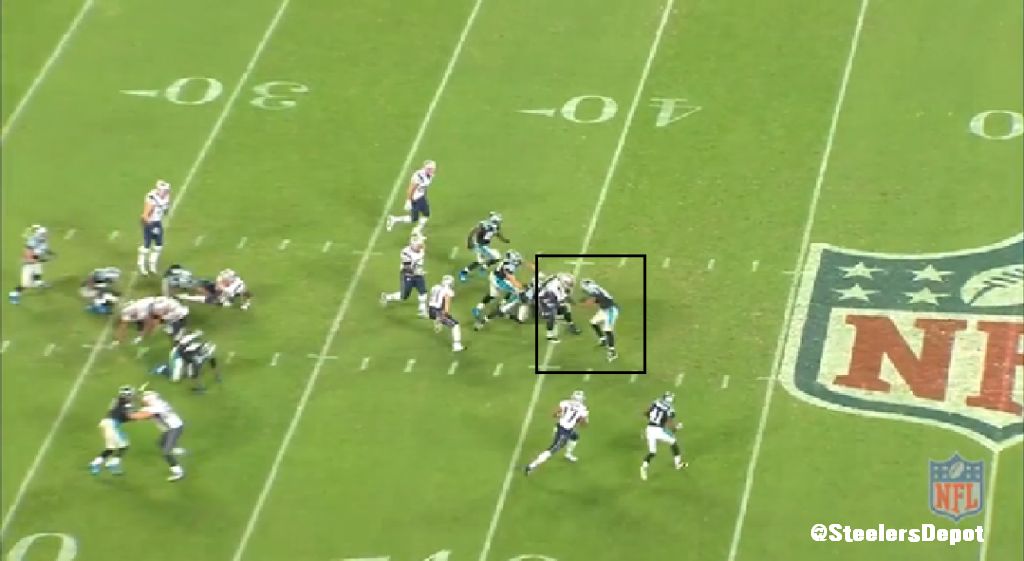 On the plus side, showed quick feet and change of direction. Out of his breaks in a hurry.

Mikell started at SS and stayed there the entire game. Finally got welcomed consistency at the other safety spot.

He was jawing with Saints’ players all game long. Got into the faces of Robert Meachum and Kenny Stills. Will fit in just fine when the Steelers take on Baltimore.

Only blitzed that one time but made it count. Happened in the 4th quarter on a 3rd and 8 with Carolina leading by three. Flushed Drew Brees to the left and helped bring him down, splitting a sack.

Used more aggressively. Brought into the box a ton and lined up in the slot (pictured below). Panthers getting more creative with him. 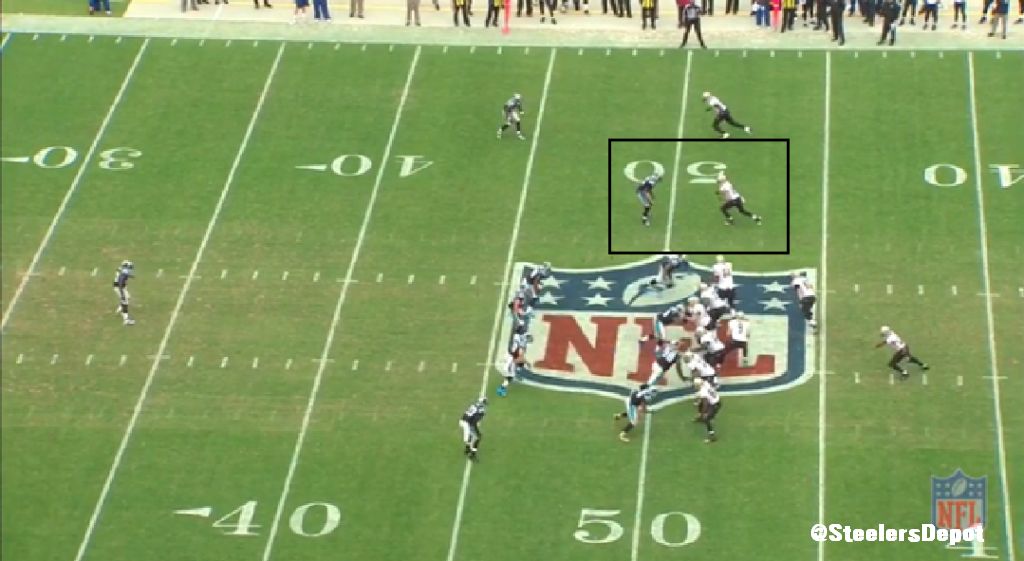 But when he was single high, as he often was, he played at a conservative depth. That often kept him out of the action.

Another missed tackle in the run game. Again, probably a little too high and the running back spins free. 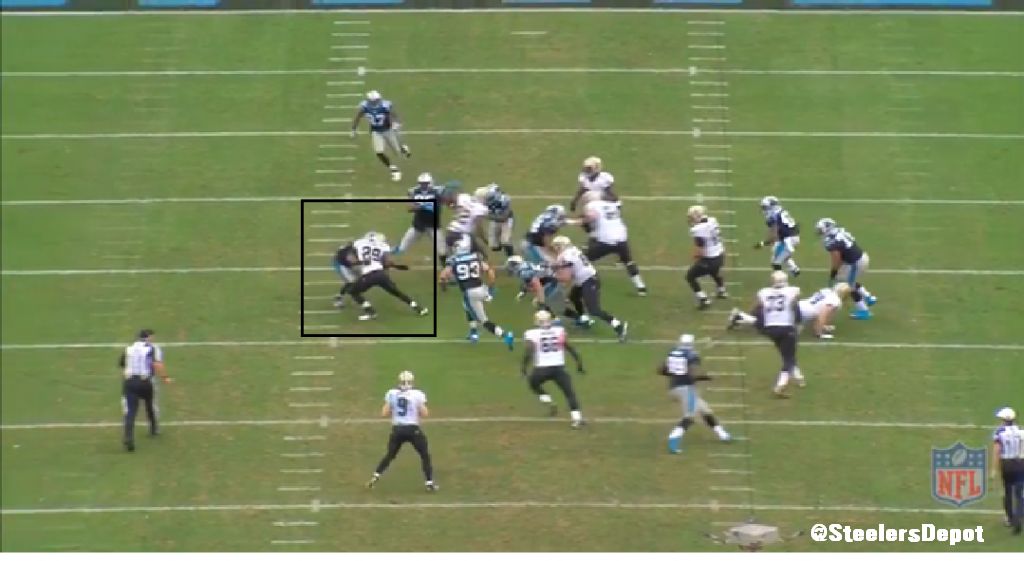 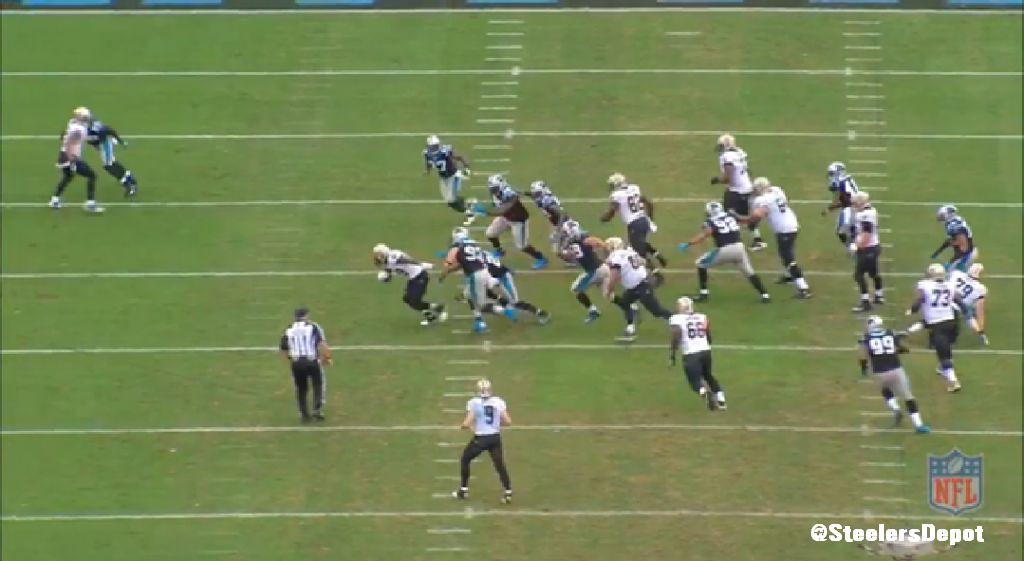 From those five games, his final numbers.

Quarterbacks were 2/5 against him for 47 yards, no touchdowns and an interception.

According to Football Outsiders, Mitchell played 899 snaps on defense, or 88.7% of them.

The positives will echo a lot of what has already been talked about. Will flash big hits. Isn’t the most aggressive but certainly not allergic to contact either. More aggressive in coverage than versus the run. Quick feet and break on the ball. Fluidity in his hips and changes direction without a problem. Didn’t allow many big plays. Kept everything in front of him. Diagnoses plays quickly and gets to the ball in a hurry.

That last part speaks to his football IQ. Aspect of his game not many have talked about. Like Mitchell mentioned in his press conference, he and Luke Kuechly were the defensive signal callers. Had to deal with a rotation at safety for a good portion of the year. Including the rookie Lester. Underrated and underappreciated aspect of what he did. Led a secondary that allowed the sixth least yards per game and tied for ninth in yards per attempt allowed.

I picked the games at random, just to spread them out across the year, and know he had more impact plays than what I saw. But only saw the one turnover created and the half sack. But the fact he was asked to play so deep in coverage and keep the ball in front of him makes it hard to be impactful.

Downsides also aren’t shocking. Missed too many tackles. In the five games, have him pegged for six misses. That’s not going to be acceptable in this defense and a big reason why Ryan Clark was criticized. Has to work on his angles, too.

Carolina finally opened up the playbook for him as the season went on. As he and the rest of the young secondary got more comfortable, Mitchell was allowed more freedom. Still plenty of single high vanilla but his role expanded.

Mitchell should be able to handle any role he’s asked to. From the deep half to being in the box or covering the slot, he’s got experience. Though unlikely, he can play strong safety too. That’s the position he was supposed to start at until Godfrey went down. Important players aren’t asked to do more than what they are capable of or something completely foreign from what their old team did. If they can’t, they’re going to struggle. Won’t be the case for Mitchell from a schematic standpoint.

As Dave Bryan already wrote, the money is right. If the team really wanted to, he could be cut before his roster bonus is due next year and the team would save money. In essence, it’s a series of one year contracts.

The signing indirectly gives the team added corner depth. Should there be an injury to one of the top three corners, Shamarko Thomas can now fill in the nickel role. Saw 68 snaps early last season before getting hurt. Even in that case, Will Allen becomes the dime back (if he won’t be already, figure he and Shark will battle it out in camp) like last year. Depth at the position not as bad as it seems.

It’s an ok but not great signing. I like Mitchell but not overly excited about him. Has to be a more consistent tackler. All eleven for Dick LeBeau need to be sound, fundamental tacklers. Don’t see that from him. But if last season is any indication, Mitchell is a smart player that doesn’t gamble and won’t get beat. Lot of value in that. Something the Steelers have to do in order to bounce back in 2014.