A Pittsburgh Steelers player by player recap, grouped by position, reviewing the 2013 season. Starting with the quarterbacks.

Ben Roethlisberger: The numbers tell a lot of the story. Most yards and highest completion percentage since 2009. Most touchdowns since 2007. He was asked to carry even more of the load this season due to a struggling running game and a penchant for falling behind, setting a career high in attempts.

Yet again, Big Ben was magnificent and was just as worthy of the MVP award as Antonio Brown. Of course, he had his fair share of “scramble drill” plays that turned into touchdowns or momentum swinging plays.

But as I’ve raved about all season long, it’s his mobility inside the pocket that has made him so special. He feels the rush as well as anyone in the league and knows how to navigate a muddy pocket. Which is good considering the state of the offensive line the first half of the season. He’s capable of throwing from an unsound base. Two touchdowns that illustrate that. The first to Jerricho Cotchery against the Minnesota Vikings and the other a strike to Emmanuel Sanders against the Baltimore Ravens. 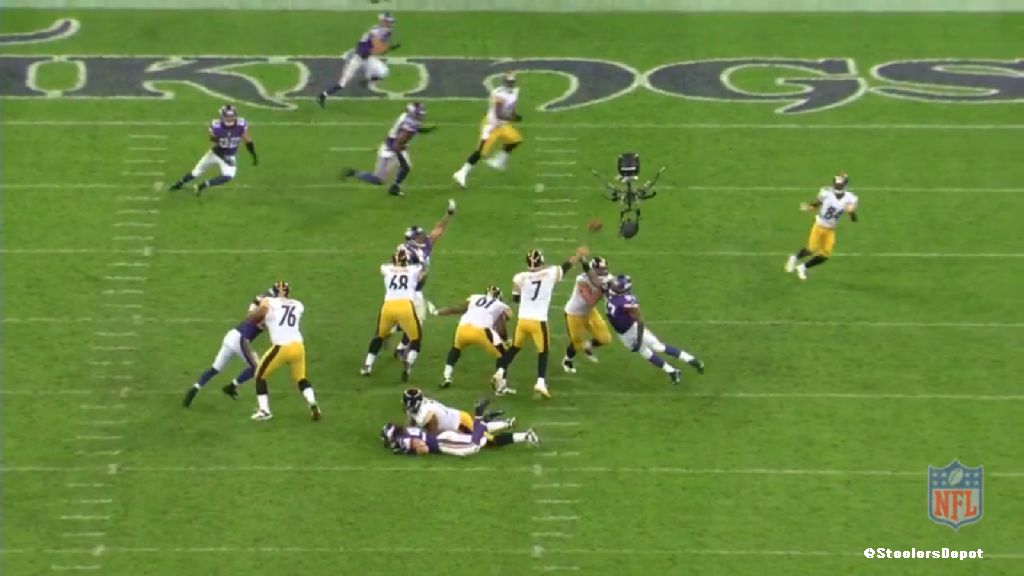 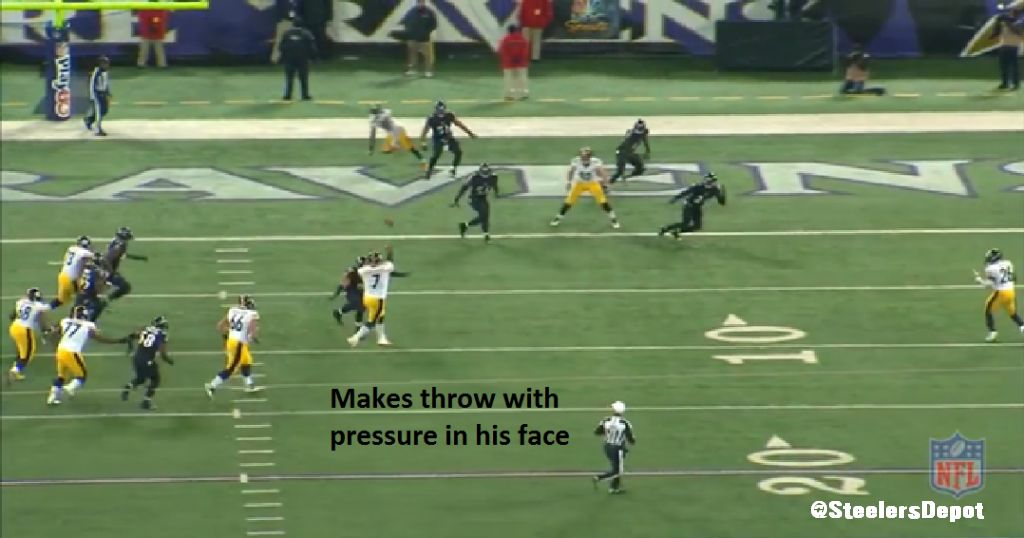 His short to medium throws have plenty of velocity on them. However, he throws an average deep ball and receivers constantly have to fight to come back to them. On a team that still had speed, it was disappointing.

Ben’s athletic and physical traits are well discussed but his mental side has grown considerably in recent years. Along with an increase in no huddle/muddle huddle,  the use of “packaged” plays Ben was given where the QB has a run/pass option and makes the call at the line was shown this season. Many smoke screens were thrown with that design. It was also used in crunch time situations (see the TD and failed 2 point conversion against Baltimore at the end of the game). Ben has to read the front and make a decision. Not many quarterbacks get that type of freedom.

Overall, Ben made good decisions at the line. Checking out of eight man fronts and recognizing late safety rotations, making proper adjustments and reads. He got a little careless later in the year as the run game picked up and may have trusted it a little too much. Multiple instances against the Green Bay Packers and Cleveland  Browns where it would have been smart to air it out against a stacked box. All nitpicking though.

Off the field, he showed himself to be a leader and without question one of the reasons the team had the strong second half it did. Despite not winning team MVP, he’s a respected veteran and leader.

Ben will get a contract extension within the next year. It’s not certain how much money he will make, but go ahead and write him a blank check. He’s worth it.

Bruce Gradkowksi: Signed as insurance in the offseason, Gradkowski did not see a single snap in 2013. But there was comfort knowing he was Plan B should Ben succumb to an injury. With just a 1.83 million cap hit in 2014, it’s a role he will resume.

Landry Jones: The rookie out of Oklahoma spent the entire season inactive. I got my best look at him in the preseason against the Washington Redskins and Carolina Panthers. It was an ugly game against Washington but he improved versus Carolina. Seeing progression is obviously huge in any young player. Still, his footwork needs a lot cleaned up coming from a shotgun system. Perfect example on a three step drop against the Panthers. Second step is too big and the drop is awkward.

The preseason will tell you only so much but I do not have the feeling he is an eventual starter in the league.

Next Up: Running Backs