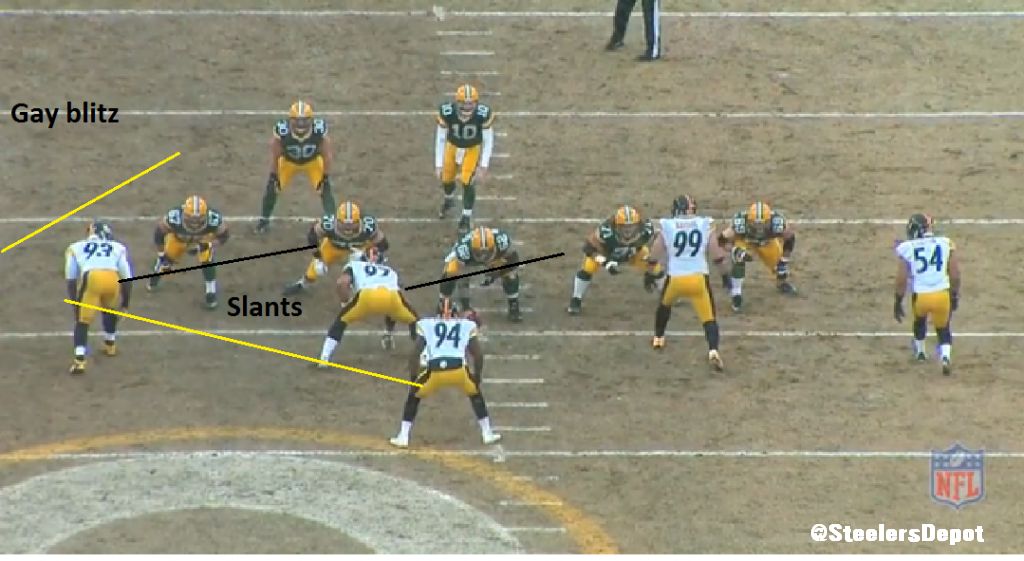 Breakdown of the Pittsburgh Steelers sack allowed in their victory over the Green Bay Packers Sunday.

1. 3rd and 9, 5:35 2nd. Shotgun, 11. Five blocking vs a four man rush. Just a breakdown on the left side. It’s difficult to pinpoint. Kelvin Beachum is watching AJ Hawk pre-snap and anticipates blocking him off the snap. He doesn’t kickslide. 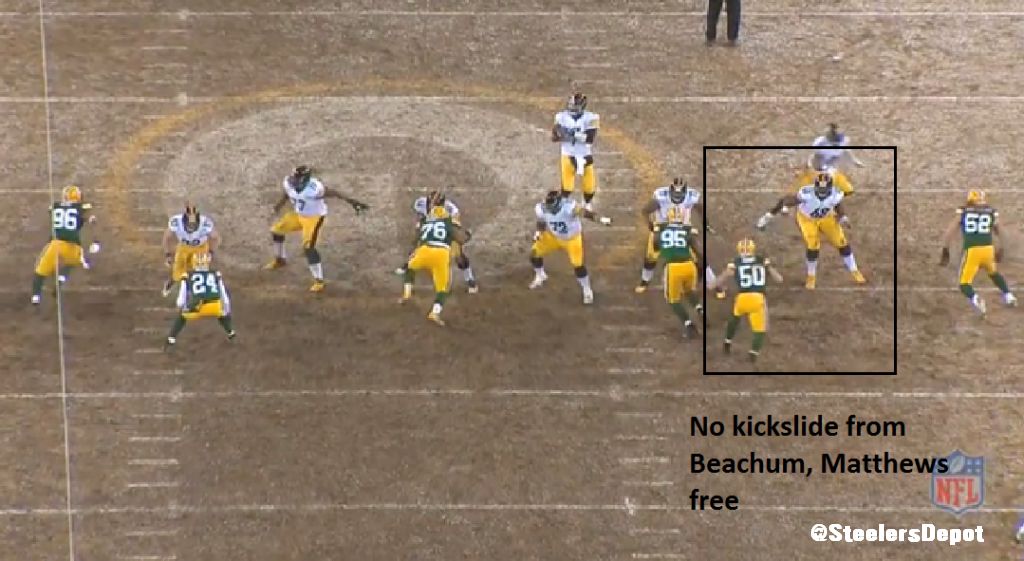 Hawk starts to rush but it’s a “hug” blitz. Rush if the running back stays in to block or follow if he releases. Le’Veon Bell does the latter so Hawk follows. 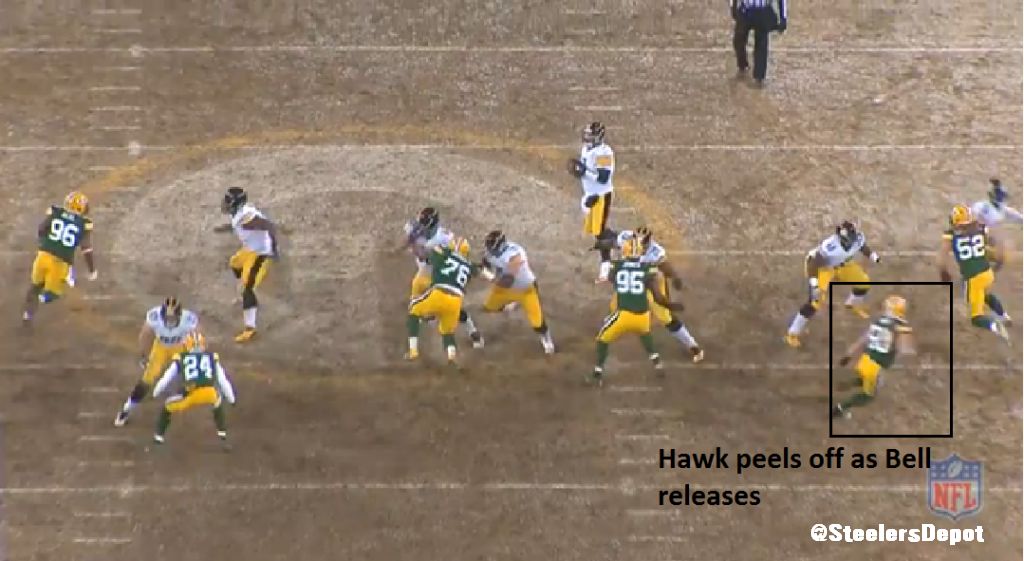 It’s only at this point does Beachum look to his left and attempt to block Clay Matthews. But it’d be tough to get in front of any linebacker at this point, let alone one of the best in the league. His desperate attempt to push him up the field, though better than expected, fails and Matthews brings Ben Roethlisberger down (and re-breaking his thumb in the process). 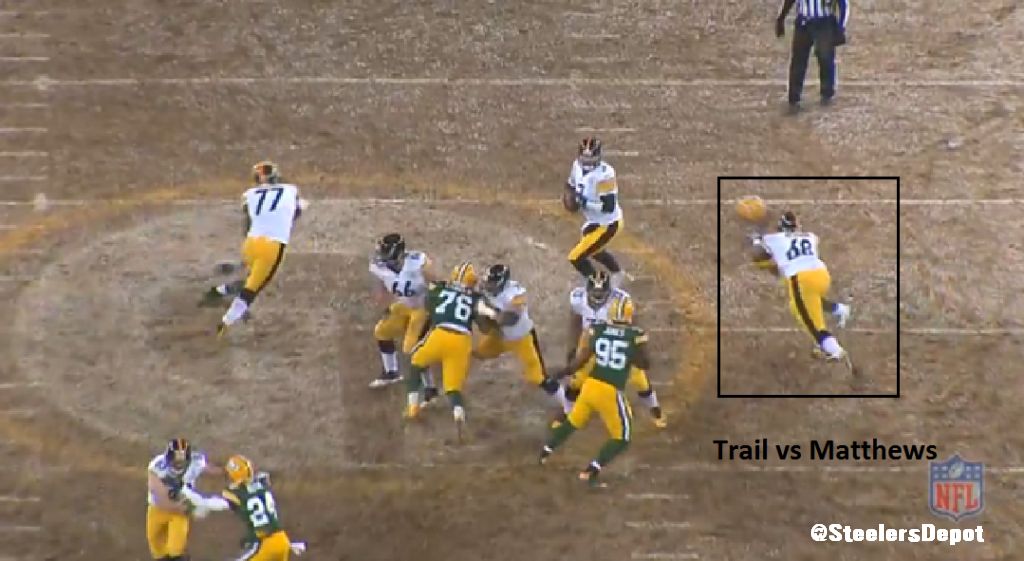 Can’t say I have a clue as to who Beachum thought was going to block Matthews. Let Ramon Foster and Cody Wallace deal with any interior pressure. The down and distance meant Ben needed time to throw and the route concept supports that. There isn’t even the Haley’s Comet rare scheme of pulling the center to block the edge rusher. Perhaps there is more to the story but I don’t know the rationale behind Beachum’s decision. Sack falls on him and he takes over the lead for sacks allowed on the season.

Only one again. Line has been impressive with its lack of penalties although Marcus Gilbert’s numbers continue to rise.

And quick looks at the three sacks the Steelers recorded.

1. 3rd and 2, 13:41 1st. Packers In shotgun, 20 personnel. Keeping six into block vs a five man rush. First, quick look at the coverage. Might be wondering why the ball didn’t come out quick on 3rd and 2. Packers run a double-move to the top of the screen vs single high. 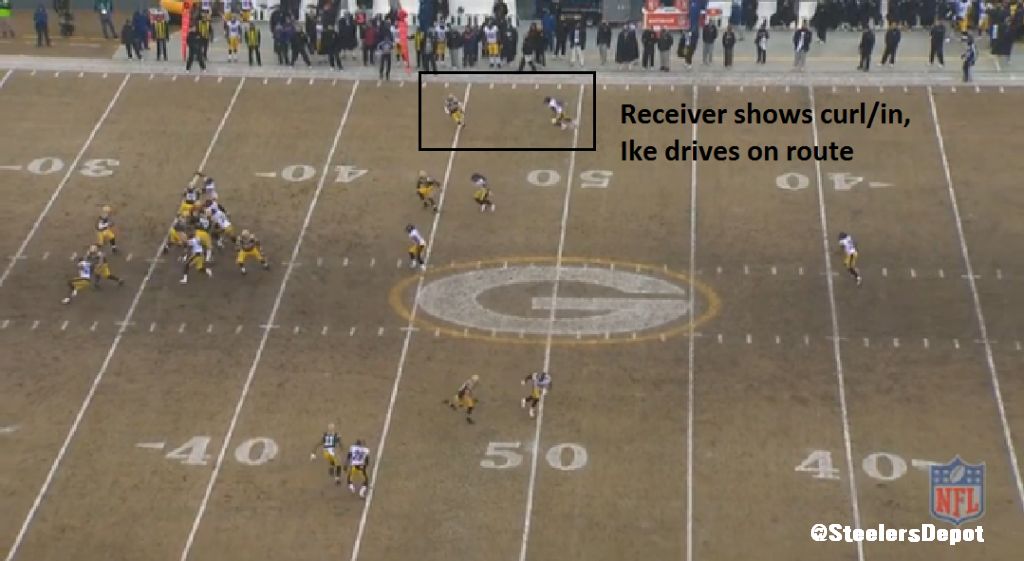 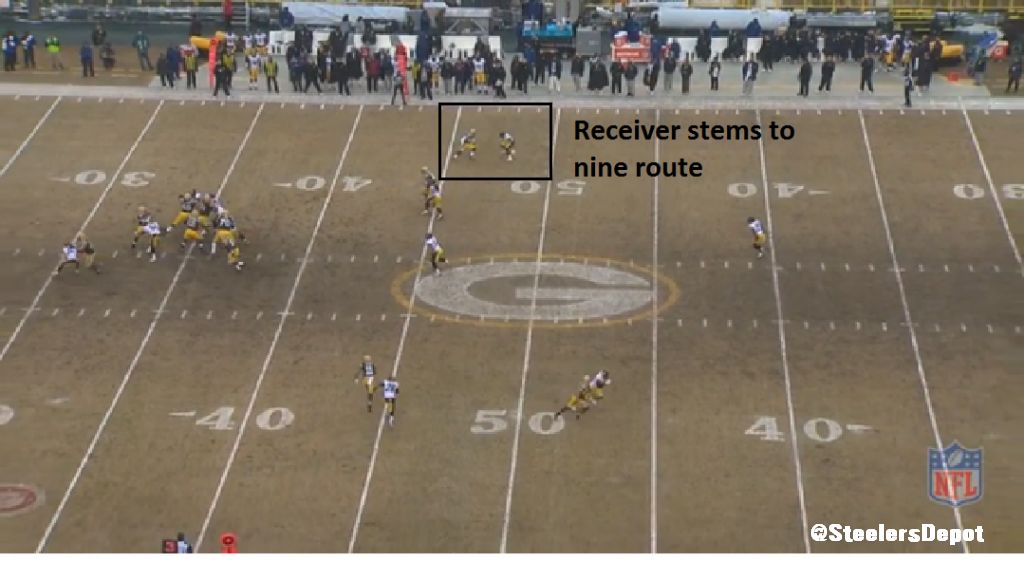 Receiver shows curl, Ike Taylor drives on it (rightfully and understandably so), and then he stems to the nine route. Had he not run into Taylor, he probably beats him. But had it been just a curl route, it seems likely the ball would have been released before the sack.

On the line, it’s a classic Dick LeBeau zone blitz. Stunt Cameron Heyward and Jason Worilds over a gap, rush William Gay from the outside, and send Lawrence Timmons through the “C” gap off the hip of the tackle. 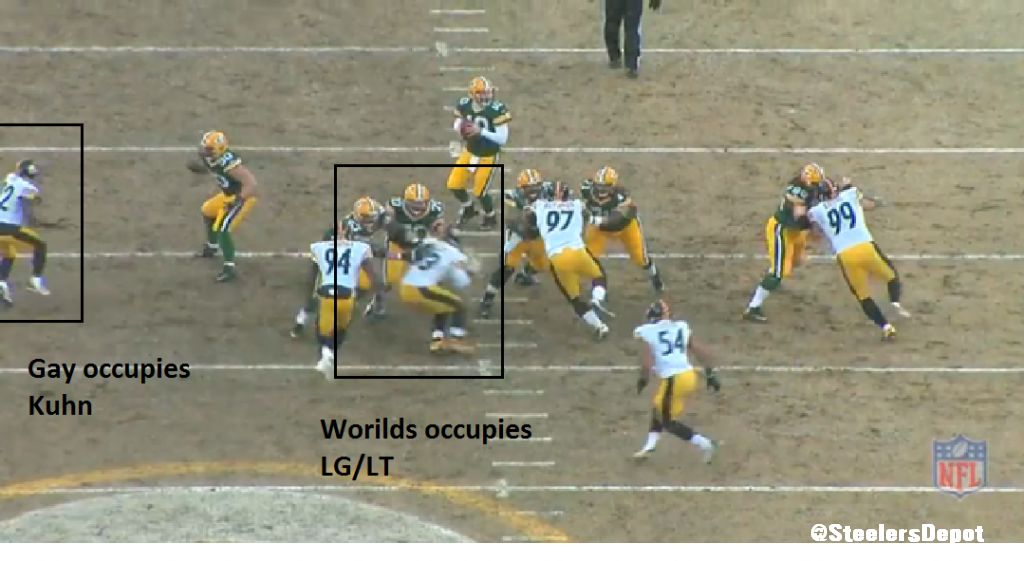 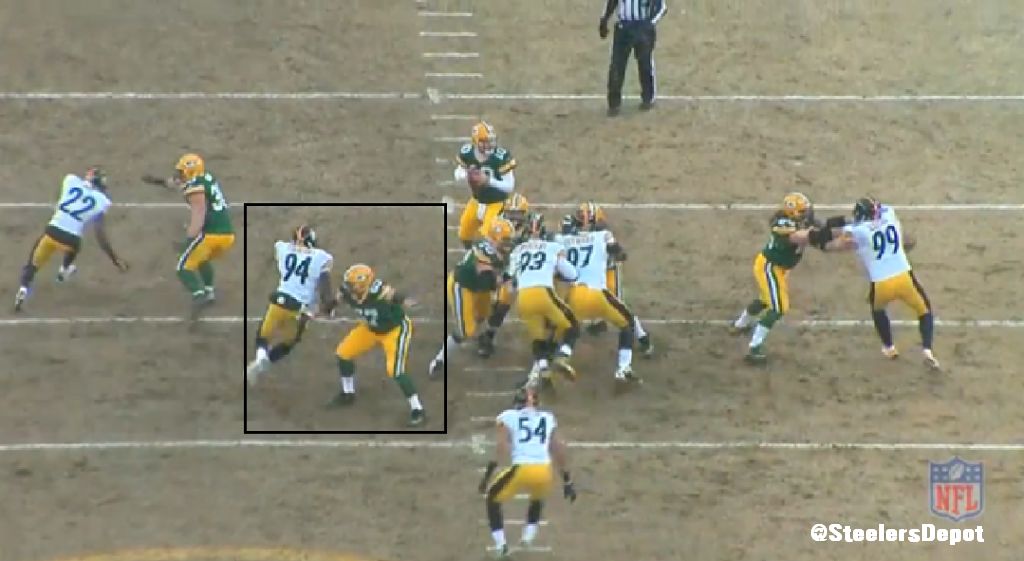 Got to love it when you can rush less than what the offense is keeping and still get a free shot. Twice in two weeks.

2. 3rd and 23, 12:23 2nd. Shotgun, 10. Five block vs five rush. Appears to be a screen to Jordy Nelson that Matt Flynn oddly doesn’t pull the trigger on. With the line cut blocking, Jason Worilds fends off the cut and cleans up the diving QB. Easy sack. 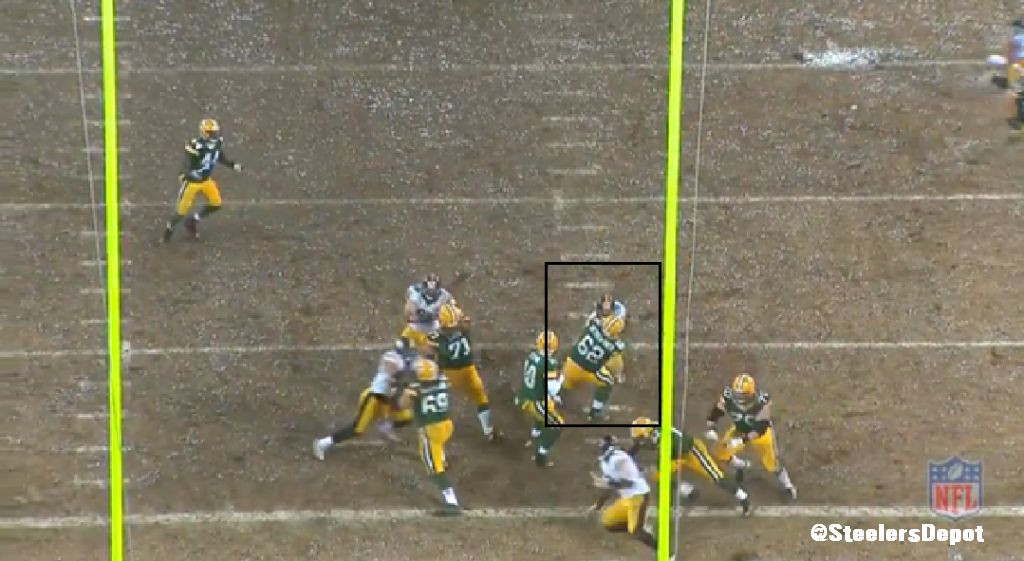 3. 1st and 10, 3:00 4th. Shotgun, 20. Blocking five vs a four man rush. Brett Keisel gets the sack but credit here really goes to Cam Heyward. Leverages the center, walking him back to the QB and collapsing the pocket (Chris Carter, to an extent, does as well).

Worilds rushes to the outside so Flynn can’t flush to his right. Pocket gets squeezed and Flynn forced to step up close to the LOS, making it easy for Keisel to shed the LG.

Steelers also show “A” gap pressure pre-snap and then drop Troy Polamalu and Lawrence Timmons, taking away any hot reads. More time it takes for the QB to process, the higher the odds you’ll sack him. 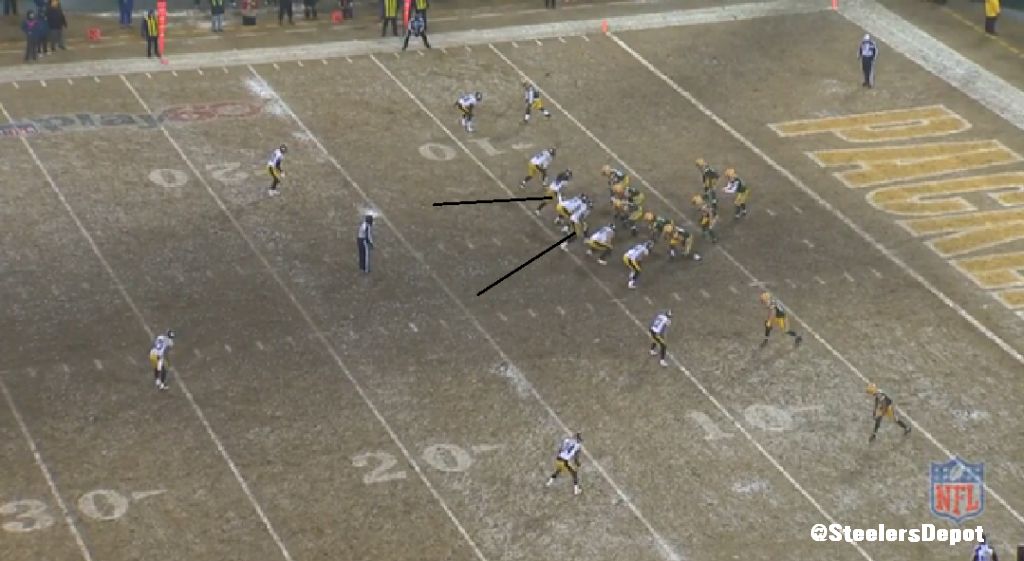 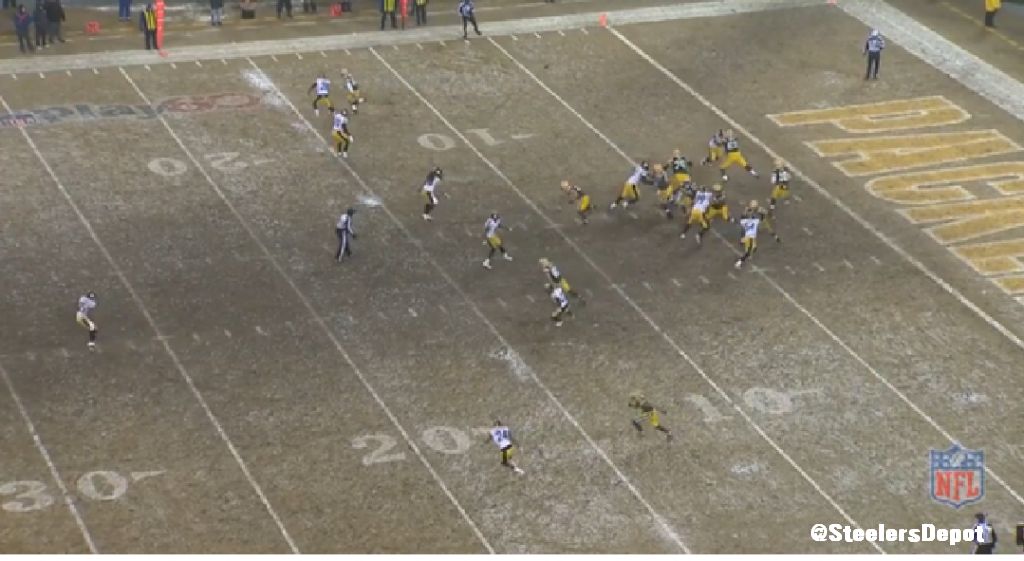