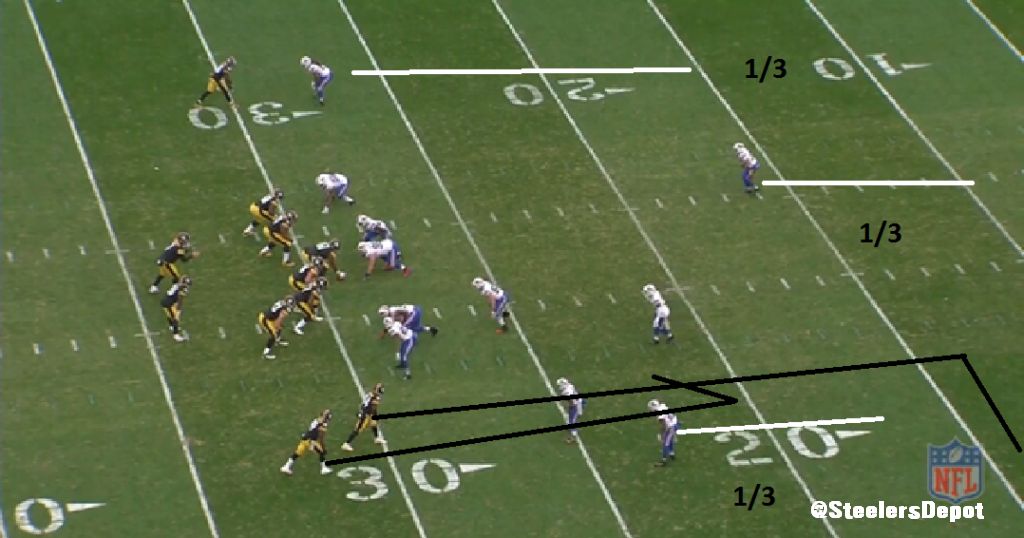 Game notes from the Pittsburgh Steelers 23-10 win over the Buffalo Bills.

– KR unit. Shamarko Thomas, Will Allen, Stevenson Sylvester, Terence Garvin, and Antwon Blake. Slight shakeup in the back lines. David Paulson and Cameron Heyward were the next two with Al Woods and Michal Palmer behind, though Heyward and Woods still formed the two man wedge. Felix Jones the upback and Emmanuel Sanders at kick returner. First time Tomlin has deviated from this all season, I’m pretty sure.

– Early in game. Bills DB able to overpower Le’Veon Bell and Fernando Velasco, getting pressure on Ben. Splits the RB/C. Not sure how that happens.

– Jarius Byrd INT. I’m fine with throwing to the backside wide receiver in this 3×1 formation. All Ben needs to do is look off the safety to hold him to the playside and the route would’ve likely opened. Ball seemed to hang, too.

– Great fill by Lawrence Timmons to force C.J. Spiller to bounce to the outside. Loss of one. 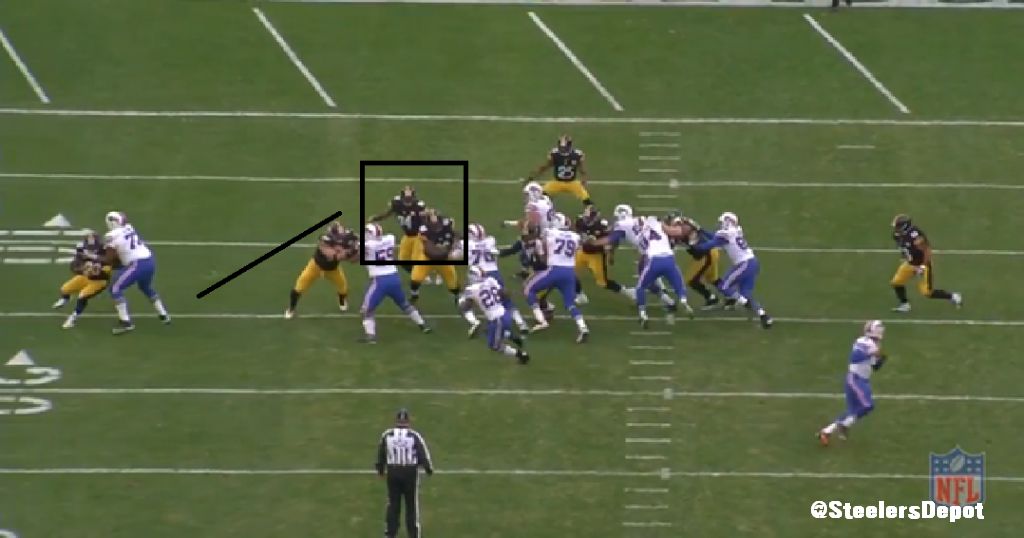 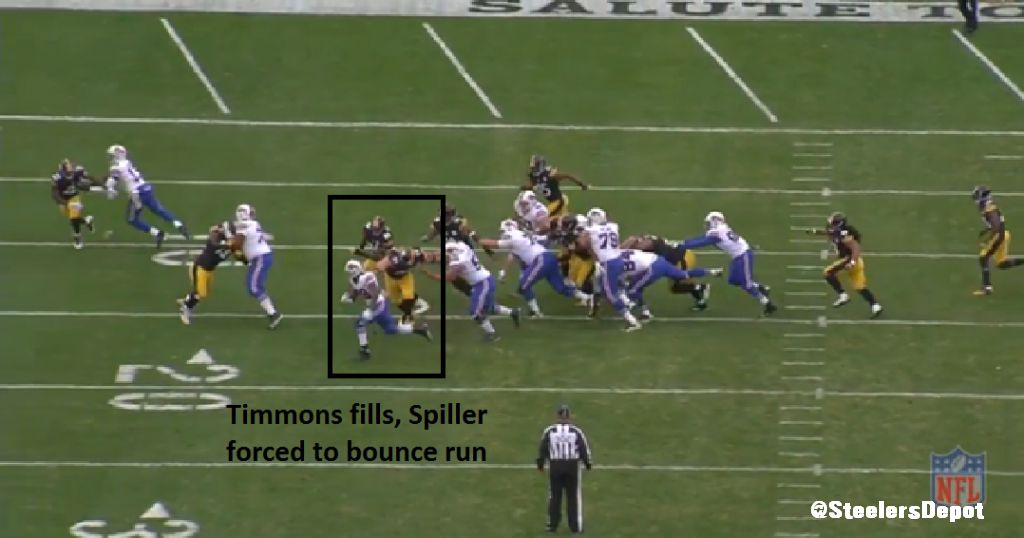 – Reason why Ben had to hurry/make a poor throw on bubble screen to Sanders that went for a loss of three. Fast Kiko Alonso lined up over center on the snap. 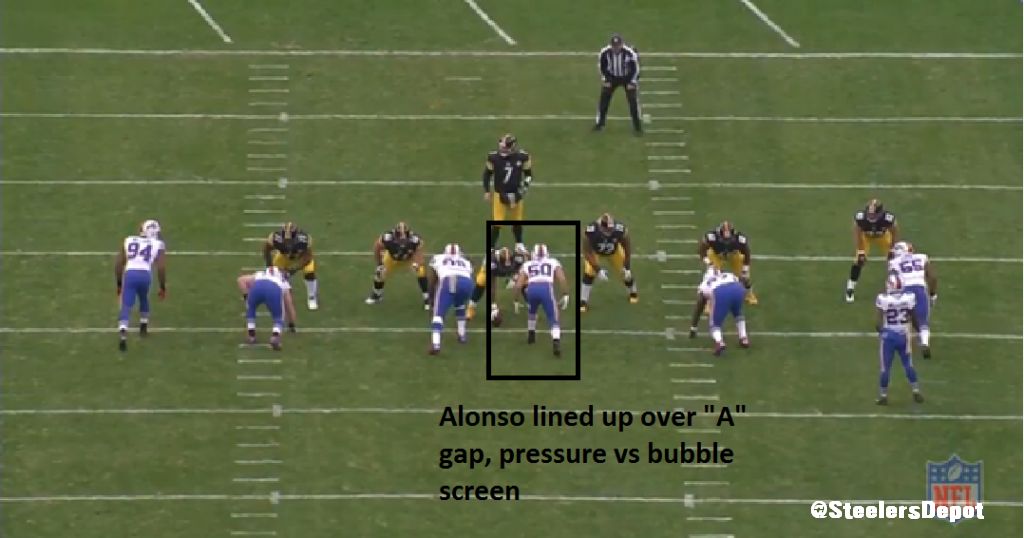 – LaMarr Woodley near INT late 1st. Nice job to reroute the WR, flip his hips, and locate the ball. If Stevie Johnson doesn’t dive for the ball and get a hand on it, good chance it’s picked off.

– Steelers lucky on the Chris Gragg drop. Good chunk of open field in front of him if he makes the catch. 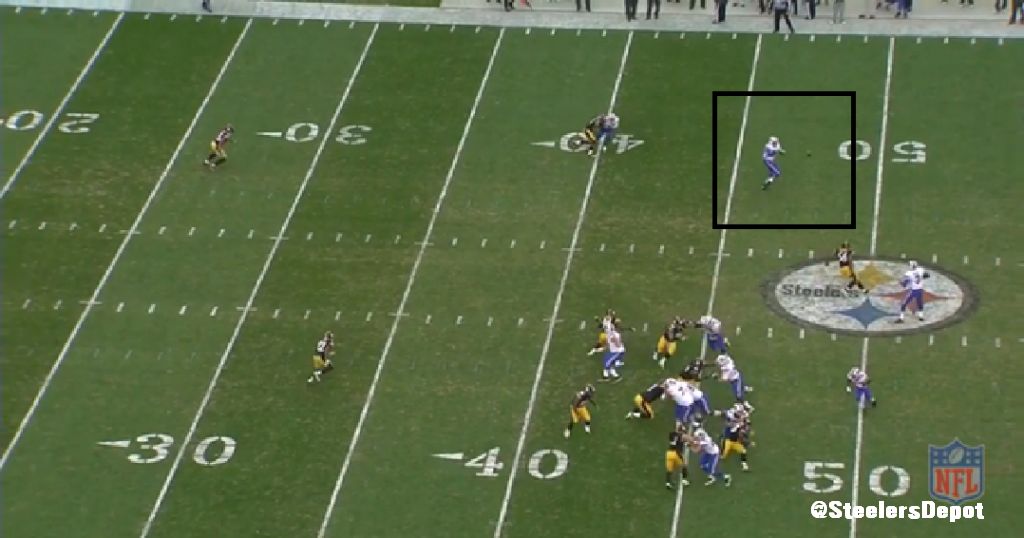 – Heyward with a nasty spin move against Cordy Glenn, getting pressure on E.J. Manuel.

– Ben’s 24 yard completion to Antonio Brown. Three deep shell, CBs carrying vertical (can’t allow anything over their head). Run Jerricho Cotchery on a curl to hold the safety responsible for hook zone, opens up Brown on the deep out. 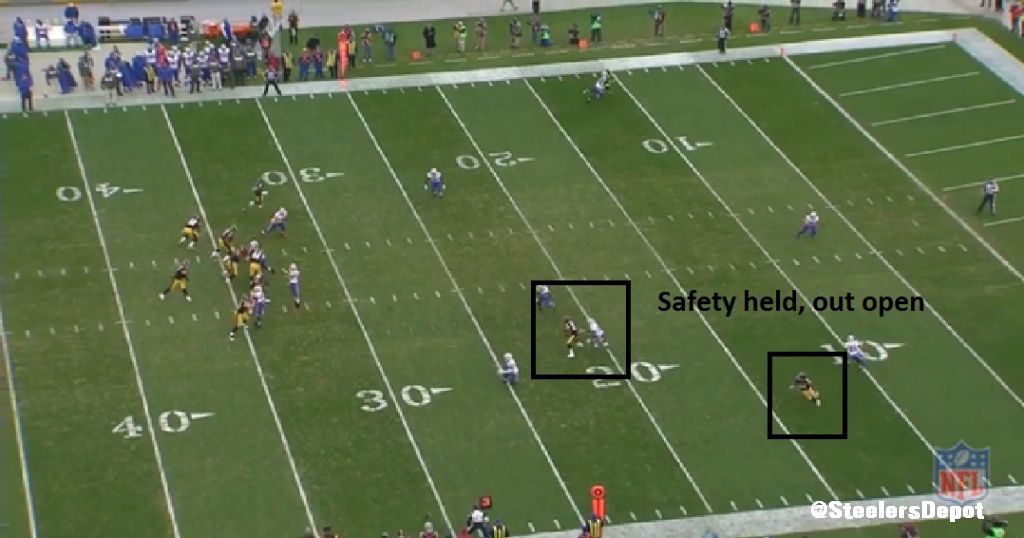 – Shot of Cotchery referring to Stephon Gilmore keeping his eyes in the backfield the drive before the fade. Granted, it is zone, but still good eye by Cotch to point that out. One of the reasons a veteran like him is on the team when many wanted him gone at one point. Gilmore at the top of the screen. GIF, 9:24 2nd, Aerial

– Bills drive before the half. Really paid special attention to Jarvis Jones both watching it live and on the tape. Pushed upfield by Cordy Glenn multiple times, completely taking himself out of the play. 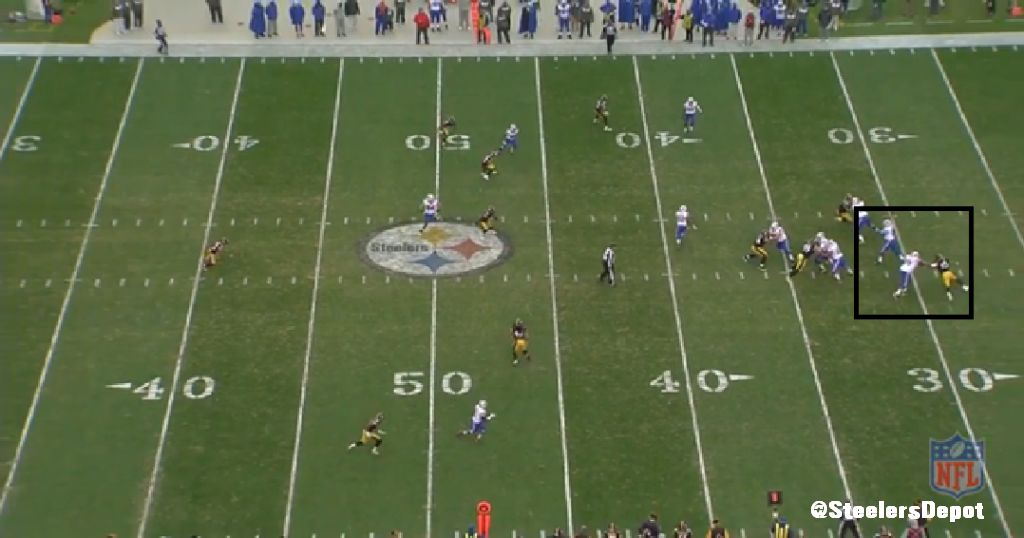 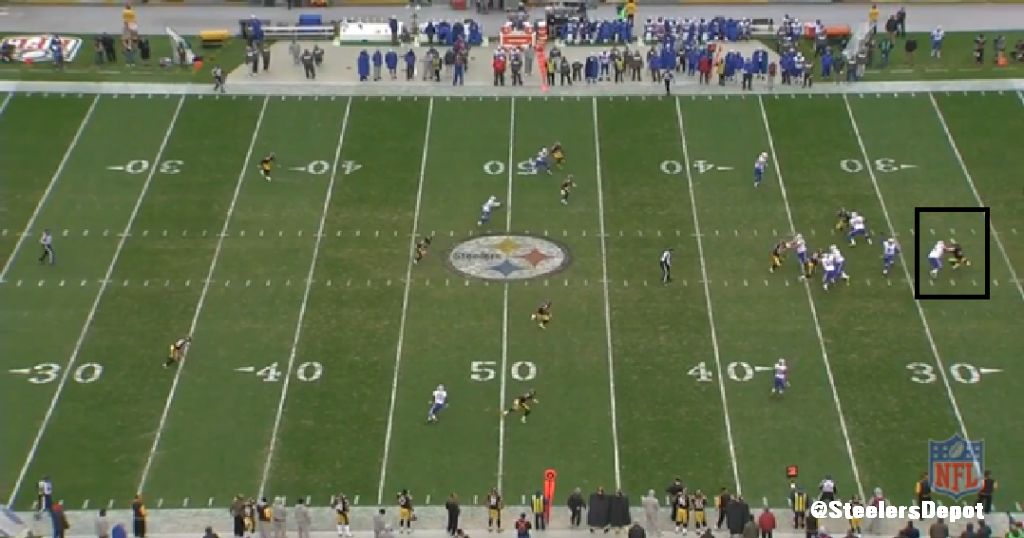 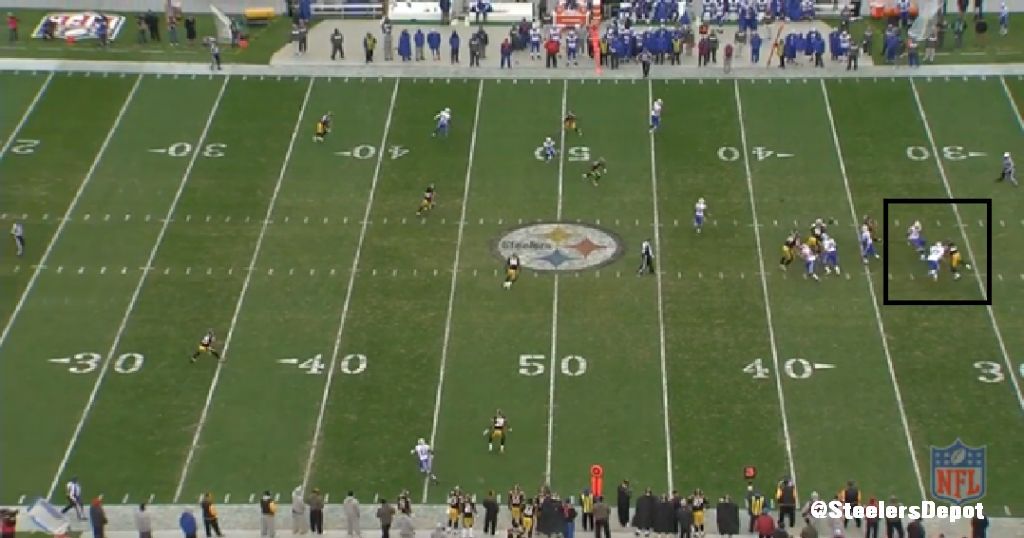 Jarvis has zero counters. On the last play, check out LaMarr Woodley. Both OLBs are trying to drip. 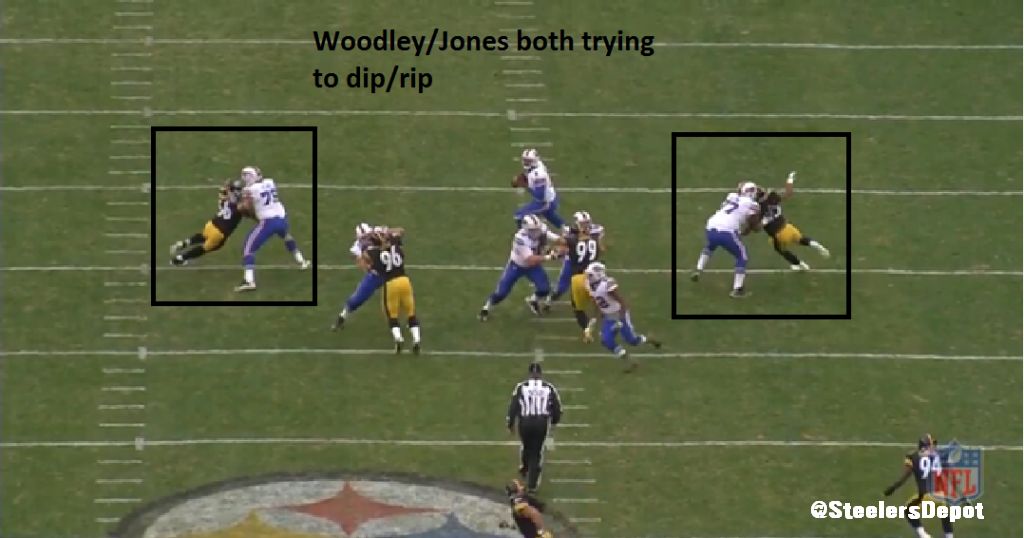 Woodley can’t get low enough so he counters with a spin to the inside and the tackle predictably can’t mirror. 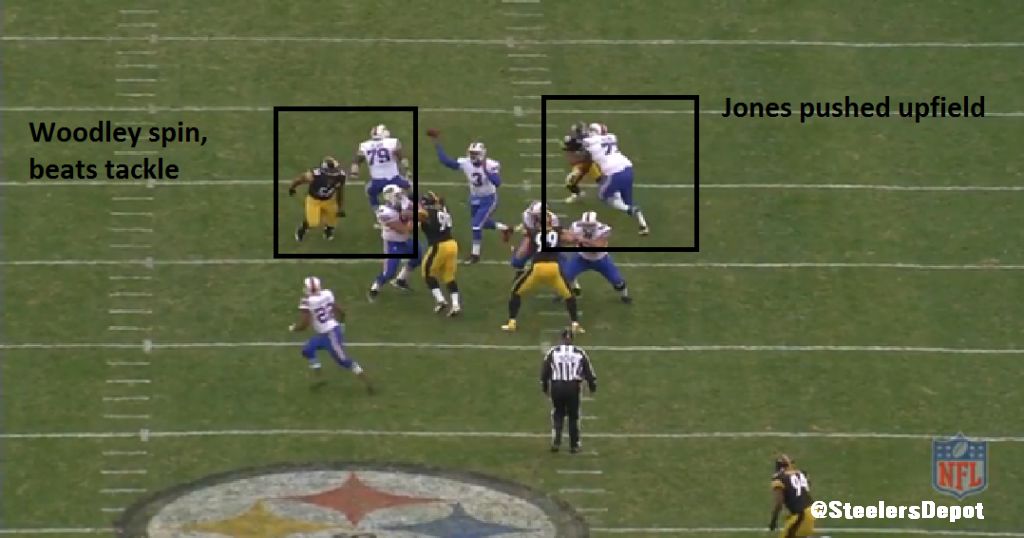 That’s what Jones has to do. Know I’m being really critical for a guy in his NFL infancy but it’s a major issue.

Jones did get pressure on the Ryan Clark INT but to be fair, he got chipped by the back and pushed inside and the tackle wasn’t expecting it. Product of luck more than it was skill.

And on his first sack, he went solo against a cut-blocking CJ Spiller. Supposed to win that battle easily.

– Ben seems to have the option of running a draw or throwing bubble screens in the team’s scripted plays early in the contest. 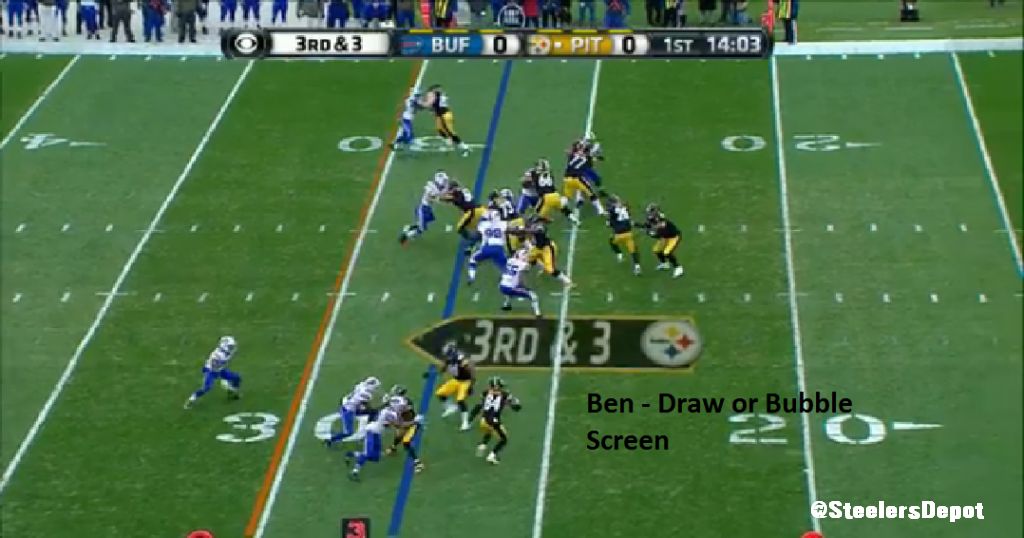 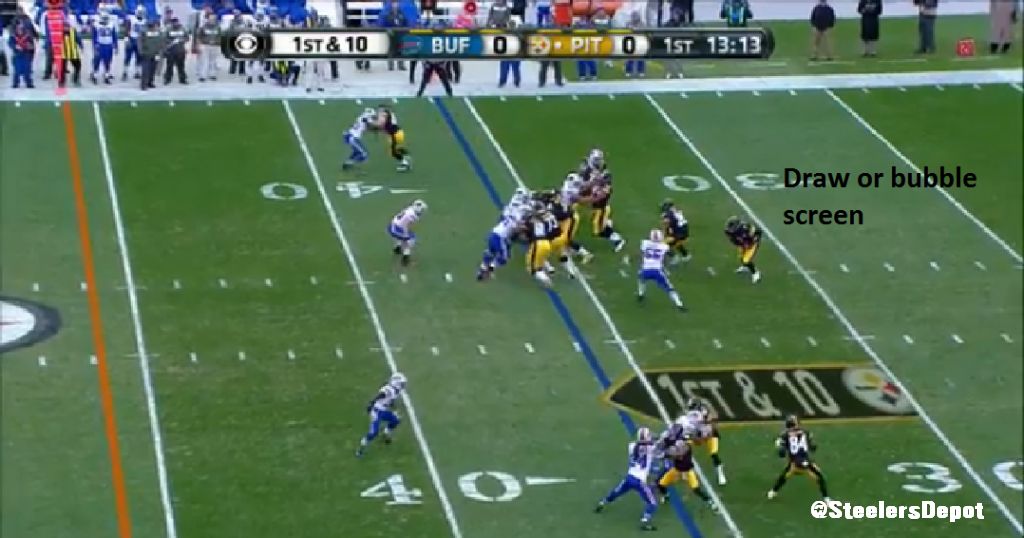 – Marcus Gilbert with a great seal on the Le’Veon Bell TD where Mike Adams gets all the credit. Side note on Adams. He’s typically had a bit of a mean streak but he was nasty not just on that play, but the majority of his other run blocks. 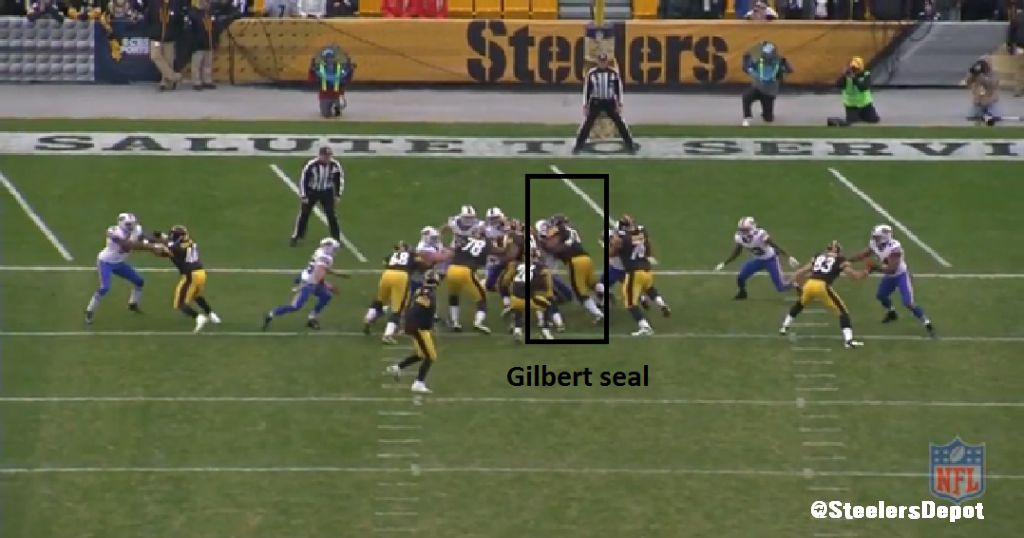 – Cameron Heyward with a nice shed of Kraig Urbik on the next play, also recording a sack. 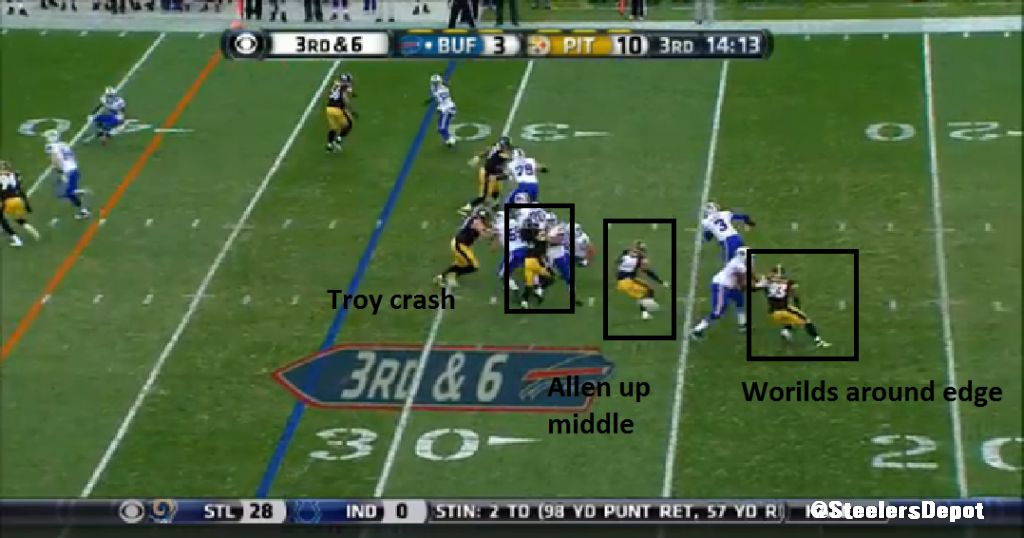 Crash one player (Troy), send another around the edge (Worilds), and run a blitz up the middle (Will Allen).

– Worth noting Will Allen getting snaps at dime over Robert Golden following the Thomas injury. And Antwon Blake picked up a snap at CB ahead of Curtis Brown. Tells you what the team thinks of those two.

– Ike near INT. Steelers fool Manuel. Show three deep look pre-snap but rotate to Cover 2 post. Manuel tries to throw curl but Ike reads the WR all the way, sees him chop his feet, can drive on it because there’s help, and nearly picked it off. Read the route the whole way and didn’t get his head around until late. Explanation for why he dropped it (and his hands are just bad). 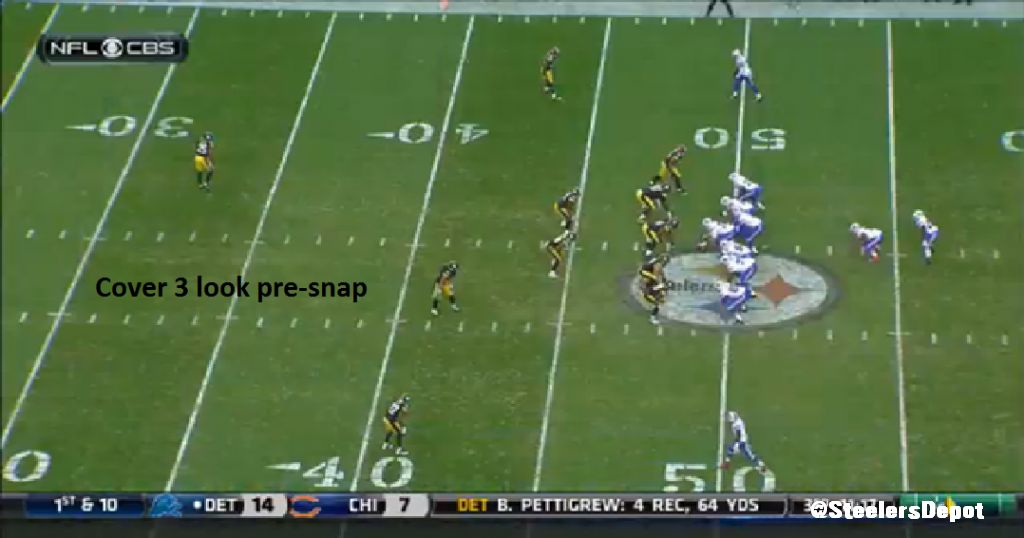 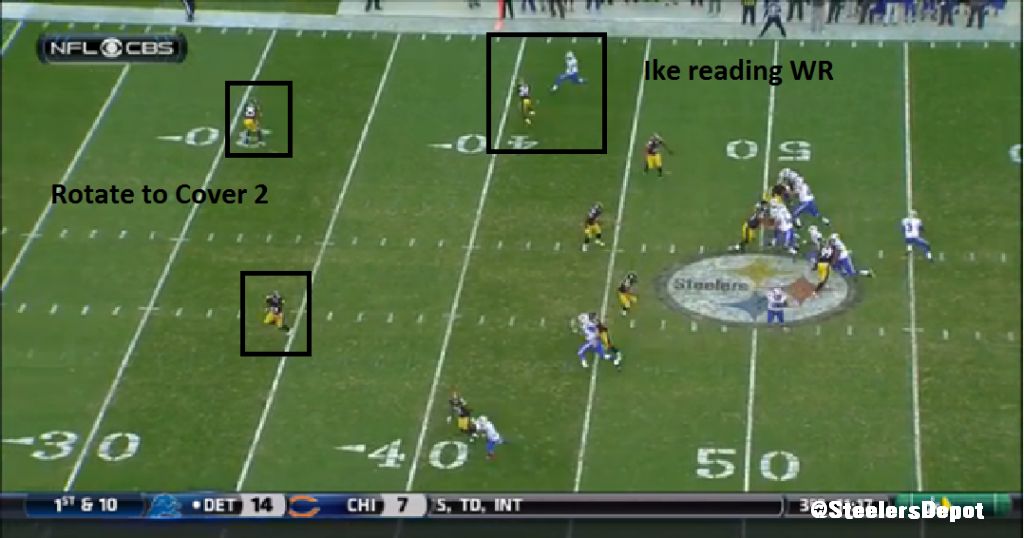 – Example of Ben hitting safety valve on Jarius Byrd blitz. Something he didn’t do on the sack he took in my sack breakdown. 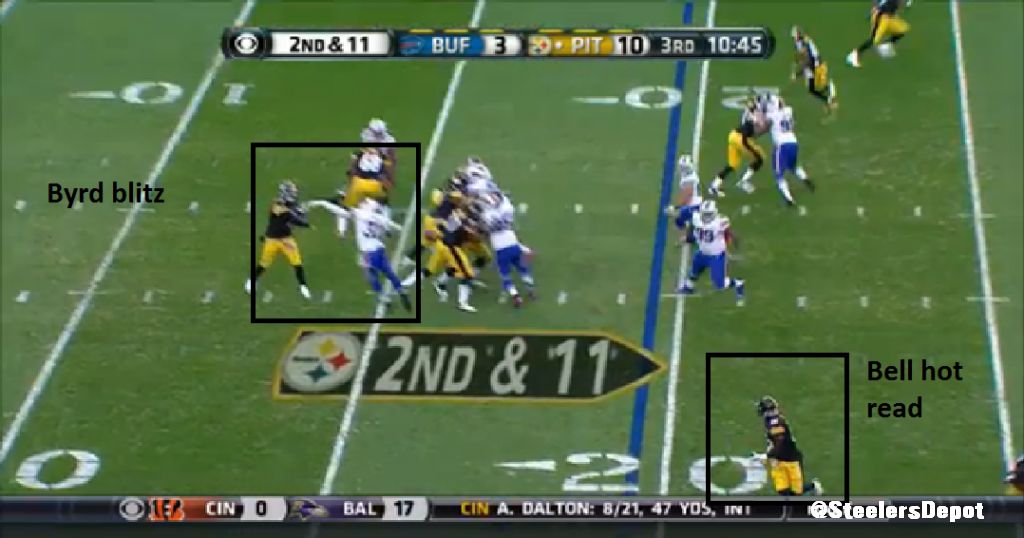 – Good seal by Guy Whimper on Jonathan Dwyer 17 yard run. Dwyer has been better and run hard but still stiff-hipped and can’t make anyone miss in the open field. Failed to do it on this play. Got what was blocked.

– Really like Bell’s balance on 2/9 run late in the 4th quarter. Took a low show from a LB, stayed on his feet and fell forward to pick up another 2-3 yards.

– Run defense as a whole was spectacular. Got multiple hats to the ball and sealed the edge. ILBs did a good job of shedding and playing fast, clogging up running lanes. And Steve McClendon was getting really good jumps off the snap, driving the center back. Much needed bounce-back performance.

– Fernando Velasco has made the best of a bad situation but as I’ve mentioned before, he’s an average talent. Got beat in pass pro a few times. Still on the ground too much.

– Not breaking stories but Cam Heyward is such a fluid athlete. By far the most positive depth chart change of the season.

– Side note on the Bills. Surprised they didn’t try to take more shots deep or use double moves. Have speed at WR. Didn’t play to their strengths.