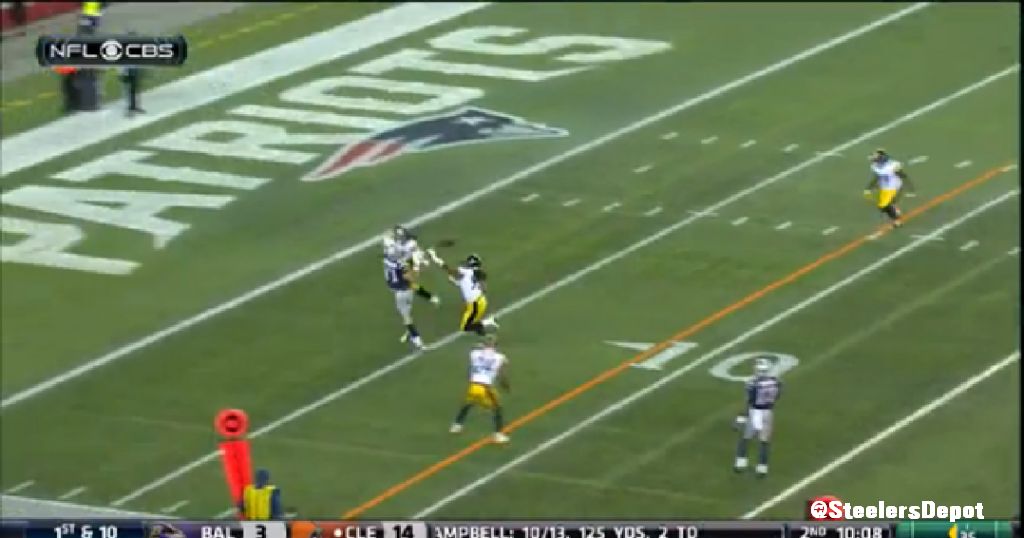 This week, a look at the performance of Pittsburgh Steelers rookie outside linebacker Jarvis Jones against the New England Patriots.

1. 3rd and 14, 6:50 1st. Lined up at ILB with Lawrence Timmons outside. Jones and Cameron Heyward get tripped up and fall, creating a huge mess with Brett Keisel the only one of the three standing. Consequently, no pressure on the play. 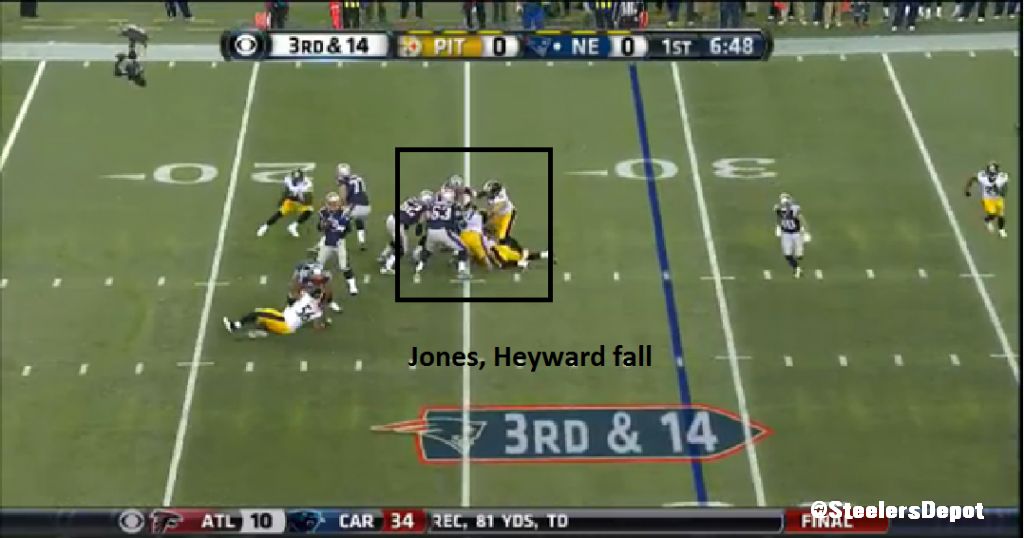 Tom Brady throws complete to Rob Gronkowski for a first down.

1. 1st and 10, 4:06 1st. No actual pass rushing move from Jones. Just tries to knock left tackle Nate Solder’s hands away. No bull, speed, or dip/rip. Solder is able to move laterally with him. Brady throws a TD to Danny Amendola.

2. 2nd and 6, 12:10. Michael Hoomanawanui with a base block vs him. Stevan Ridley cutsback for a gain of 13. Jones on contain so not his fault but “Hoom” with a good push and looked strong than the linebacker on this play.

3. 1st and 10, 11:41. Playaction, Patriots fake a stretch to the right. Jones gets to rush free on Brady. Ball comes out quick to a wide open Hoomanawanui. At least Jones gets his hands up in an effort to knock it down. 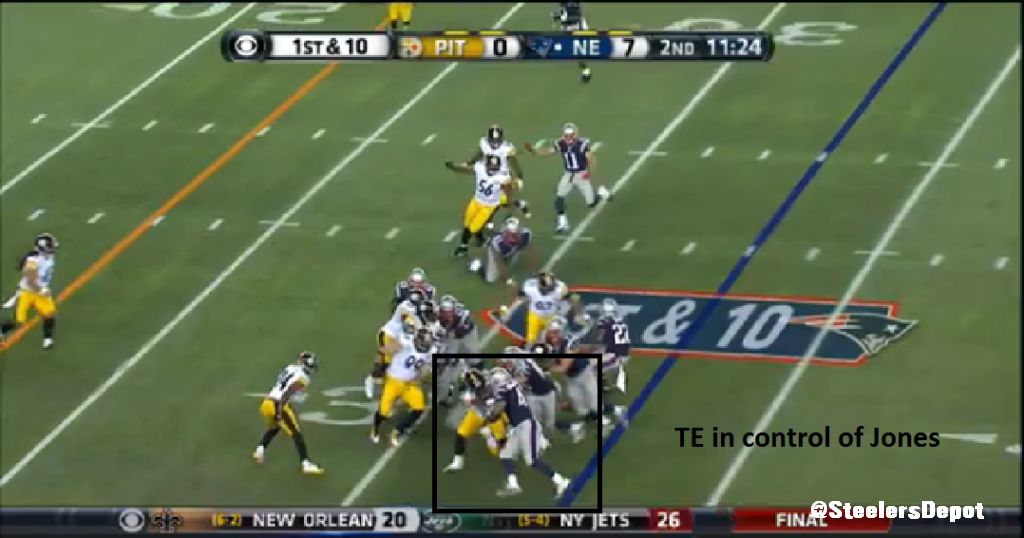 5. 2nd and 9, 10:56. Bullrushes Hoomanawanui. Bit overextended, feet aren’t underneath him but converts speed to power and gets a good push. 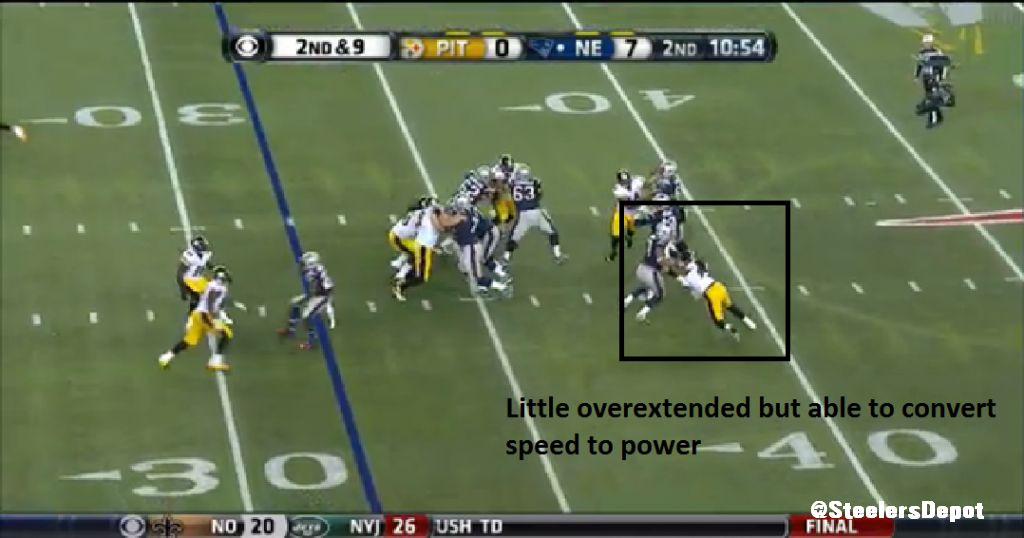 6. 1st and 10, 10:35. First time dropping into coverage. TD allowed against Gronkowski. Honestly, not a lot more the rookie could do to defend it. His flip is smooth and he’s staying with Gronk. Even puts his hands up to try and take away a window.

Gronk is just a freak athlete and Brady makes a spectacular throw. Simple as that.

1. 1st and 10, 7:03 3rd. Jones asked to slant down with Troy Polamalu blitzing in hopes of getting a one-on-one matchup with the backup (pulling guard on pass Troy up). So pretty much taking himself out of the play because of the assignment.

3. 1st and 15, 6:24. Gets his hands into Solder’s chest and able to shed to the inside. Ball out before he gets pressure but a solid play.

4. 2nd and 4, 6:13. Run to the left. Based by Solder. Left tackle sticks to Jones pretty much the whole way through and knocks him off balance when he’s finally able to shed (after the RB has cut upfield).

5. 1st and 10, 5:43. Jones locked up by Solder. Can’t do a thing against him. Needs to use his hands better. Knock the tackles away, get yourself back in control and put the lineman on his heels.

7. 3rd and 1, 5:10. Good jump off the snap and gets his arms extended. Recipe for pushing his lineman off the ball, which he does. 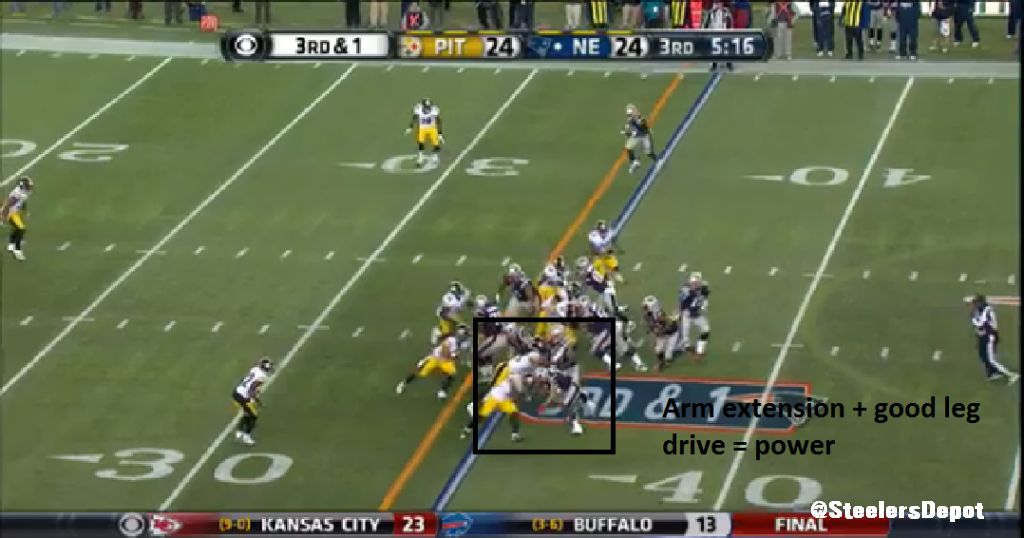 1. 1st and 10, 5:25 4th. Solders stones him on an attempted bullrush. Doesn’t move the tackle back a foot. Pure strength issue both with the upper and lower body. 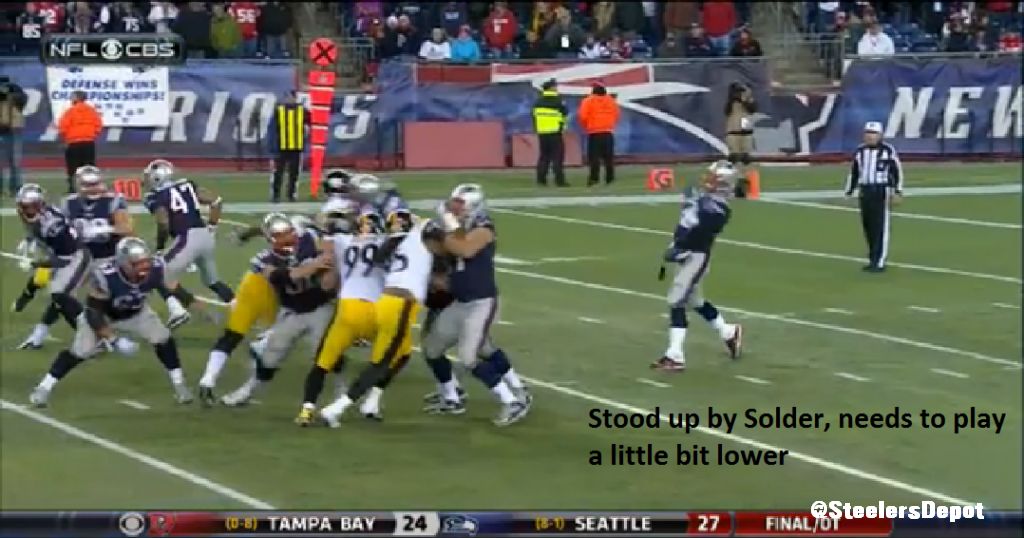 *One short of the total snaps because of the false start.

I’ve said repeatedly his pass rushing has some major work to do. And this week was no different. Still not seeing a repertoire and he got pressure on really just one of his ten rushes. But his nondescript performance against the run is more concerning. The fact that he was getting pushed around by a tight end when he had been showing a lot of strength and the ability to get off blocks with quick hands is something I didn’t expect. Maybe part of it was him gap controlling more against the Patriots zone blocking runs.

Feel like the team simplified his assignments after blowing multiple against Oakland. Only dropped into coverage once and wasn’t used on any stunts. Only slanted once as a pass rush (the Troy blitz). In past weeks, we’ve seen him loop inside with the end or some variation. The team is getting back to basics with Jones but this week was still disappointing.