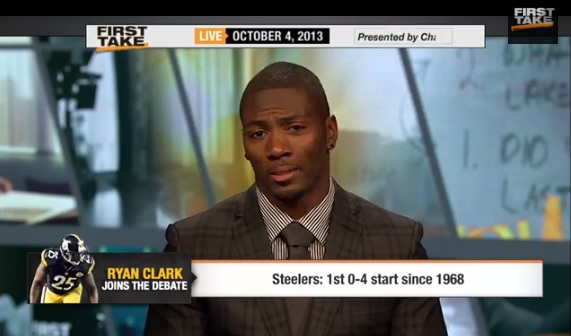 Friday, Pittsburgh Steelers safety Ryan Clark was on ESPN First Take and tried to explain to Stephen A. Smith and Skip Bayless why the team is off to an 0-4 start. In addition, Clark also gave his reasons as to why he thinks the Steelers will still make the playoffs.

“I think we will,” said Clark. “We will make the playoffs and the reason I believe we’ll make the playoffs, we’re in a division where right now the Cleveland Browns are leading at 3-2 and they’re extremely good team, but they do have cracks. Brandon Weeden is now the quarterback. I think it’s a team that we can definitely compete with and beat.

“And we get to play everybody we need to beat still this season. We have five games against division opponents, we go to the New York Jets, we also go to Oakland, so these are all AFC games and if you win those games, nine wins or ten wins can win the AFC North and put you in the playoffs.”

Clark didn’t stop there with his disrespecting of the Browns and Weeden.

“Last night [Thursday night against the Buffalo Bills], Brandon Weeden was ready to go and they didn’t want to put him in. They still wanted to start Brian Hoyer and if it’s not for Travis Benjamin being electrifying in the first half, I still think they lose that game.

“So for me, I feel like he’s easier to defend, I think we’ll do a good job against him in being able to confuse him, make him hold the ball too long and get some pressure. So, Cleveland is definitely an easier team to beat with Brandon Weeden at quarterback.”

Clark, who appears to have all the answers right now, also had a few tips for the Steelers offense and quarterback Ben Roethlisberger in addition.

“Sometimes you have to protect Ben against Ben,” said Clark. “He’s a guy that’s great at improv, extending plays, making plays with his legs, letting receivers scramble, do the scramble drill, and hit them deep or hit them across the middle, allowing them catch and runs.

“So right now, we have to kind of tone Ben down in a sense and say, hey, right now we’re not a good enough team for you to try to extend plays, for us to take sacks, or for us to have turnovers.”

Well, I am sure Roethlisberger hopes Clark and the rest of the defense can start stopping the run and start tackling better. If they do, then perhaps he won’t have to try to be Superman at the end of every game. Let’s face it, the offense has it together more than the defense does right now.

Clark certainly likes being front and center with the media as that is where he his paycheck will come from as soon as his playing days are over. That could be as early as next year the way he is playing right now.

The Steelers are 0-4 right now and the last thing Clark needs to do is to run around guaranteeing that the team will make the playoffs while disrespecting other teams and their players in the process. Not only that, I really don’t think he needs to concern himself with the Steelers offense, because the Steelers defense has its own share of cracks that needs repairing of which Clark is one of them.