Early in the preseason game Monday night against the Washington Redskins, Sanders was highlighted by Jon Gruden of ESPN for his blocking on a 12-yard run by running back Jonathan Dwyer. Gruden, however, failed to recognize the job done by wide receiver Jerricho Cotchery on the play that also figured heavily into its success. 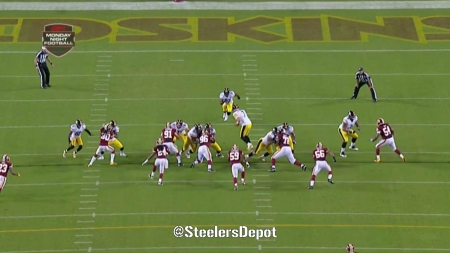 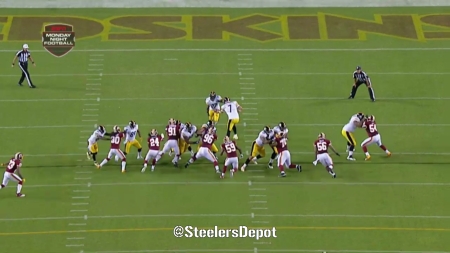 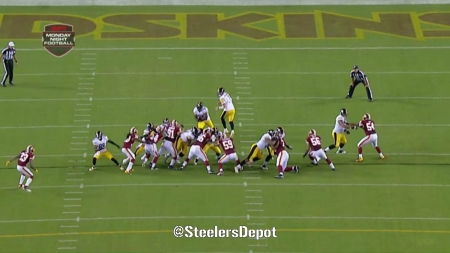 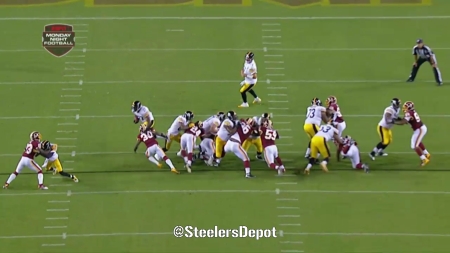 In the animated gif and pictures above, the Steelers have their 11 personnel on the field in a single-back set with Sanders flanked outside of Cotchery on the right. Pre-snap, Redskins cornerback E. J. Biggers is in the box pressing Cotchery and strong safety DeJon Gomes is also in the box mirroring tight end David Paulson, who had motioned from left to right.

At the snap of the ball, Cotchery fires off into Biggers and he immediately comes off that block to handle Gomes, who thinks he has a chance to blow up the play through the gap outside defensive end Ryan Kerrigan. Prior to Cotchery getting to Gomes, Sanders follows up on Biggers and gives him a push inside that allows Dwyer access to the edge and one-on-one matchup against outside cornerback DeAngelo Hall. Cotchery easily handles Gomes in the gap, and Sanders runs enough interference on Hall to enable Dwyer to gain the first down.

Cotchery has forever been underrated by many as a good run blocker and Gruden was even proof of that Monday night. I\’m not downplaying the work Sanders did on the play at all, but I just wanted to make sure Cotchery received his fair share of recognition in addition.

While rookie wide receiver Marcus Wheaton is certainly progressing at a nice pace, he was an average blocker in college. He was willing mind you, but still has to improve that area of his game before he will completely take over the No. 3 spot from Cotchery.