Below are the defensive player play counts and the participation chart for the Pittsburgh Steelers week 13 win over the Baltimore Ravens. We also are including down, time of play and yards gained to better help you identify the play.

The Steelers were in the nickel for 15 plays in this game and you can see that Curtis Brown played outside on those snaps while Cortez Allen shifted into his normal slot role despite Ike Taylor leaving the game with an ankle injury.

Cameron Heyward has been playing almost exclusively on the left side now when he comes into the game as he has been replacing Ziggy Hood.

The Steelers of course did not use the dime in this game and as a result all four linebackers played every snap as you would expect. Keenan Lewis was the only other player on defense to play every snap in the game. 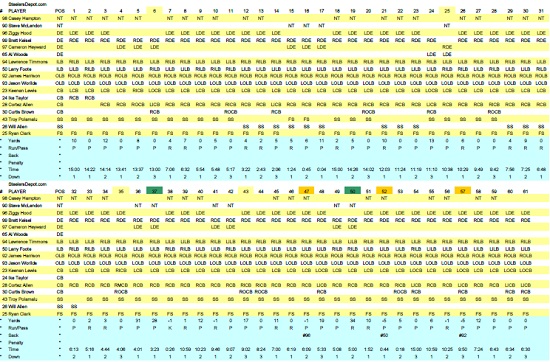