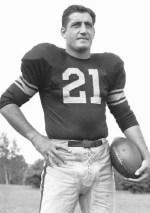 Former Pittsburgh Steelers center Chuck Cherundolo passed away on Dec. 22 at the age of 96 in Lakeland, Florida due to heart failure.

At the time of his death Cherundolo was the fourth-oldest living NFL player and the oldest living former Steelers player.

Cherundolo played football at Penn State University where he was an All-American center and middle linebacker before beginning his professional career with the Cleveland Rams. He also played for the Philadelphia Eagles for one season before joining the Steelers in 1941, where he earned back-to-back Pro Bowl honors.

According to Pro Football Reference, Cherundolo played in 63 games with the Steelers from 1941-48. He recorded 4 interceptions at linebacker during that span in addition to being a Pro Bowl player in 1941 and 1942. Cherundolo did not play in 1943 and 1944 as he had volunteered for the Navy where he was responsible for training new recruits for World War II.

Cherundolo was selected to the Steelers legends team in 2007 as a part of Pittsburgh’s 75th anniversary season, which was composed of the best of the best from the pre-1970 era.

Born August 8, 1916, Cherundolo was the Steelers team captain and named the team MVP in 1947. That team went 8-4 that season and is considered to be the most successful Steelers team prior to the great teams of the 1970s.

The Steelers have had great centers over the years in Ray Mansfield, Mike Webster and Dermotti Dawson, but before them all there was Cherundolo, who was considered one of the best centers in the NFL in his day.