The 13 yard touchdown that Pittsburgh Steelers running back Rashard Mendenhall scored in the win over the Philadelphia Eagles was officially scored as a run and not a pass from quarterback Ben Roethlisberger.

The official scorer viewed the pass from Roethlisberger as being a lateral and I have had a few request to take a closer look at the play. Obviously this play could make the difference in a fantasy football matchup, and besides, it never hurts to get Roethlisberger another touchdown pass if we can.

I have posted an animated gif of the play below along with 3 still shots that show the moment that the ball leaves the hand of Roethlisberger, the ball in flight, and the catch by Mendenhall.

In the first picture it certainly looks as if Roethlisberger releases the ball from a point just behind the Eagles 21 yard-line. 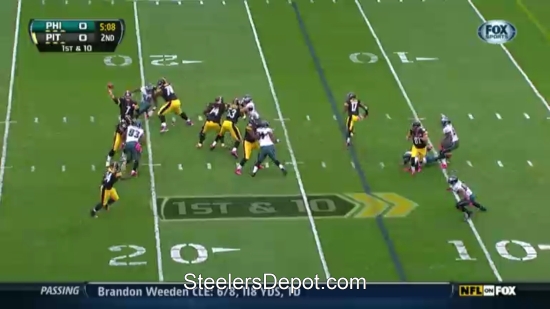 The second picture, which shows the ball in flight, certainly makes it appear that the football is traveling parallel to the 21 yard-line, but this could be camera angle issue causing an illusion of sorts. 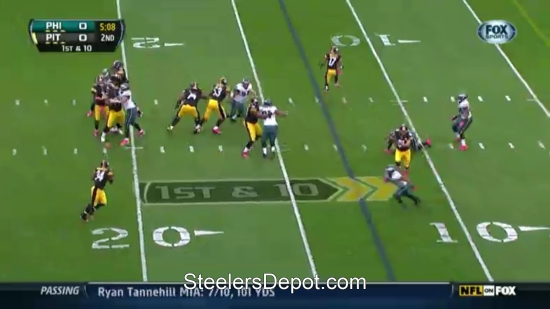 The last picture shows Mendenhall making the catch, and although we can no longer see the ball, it too appears to be right on the 21 yard-line. 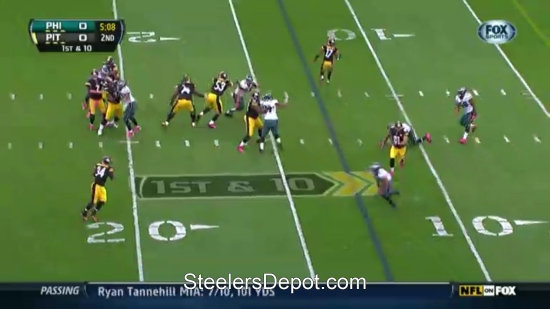 This play is really close to being a forward pass, but I can\’t imagine that there will be a scoring change unless their is a more definitive camera angle. Maybe there is.

So what did Mendenhall think about it being scored a run? “I had seen that afterwards,” Mendenhall said. “Thinking about it, I could feel the ball in my back shoulder, so I can see it being behind the line and we\’ll take free rushing yards.”

Although Mendenhall mentions it being behind the line, that does not matter. It only matters if the ball goes forward when released from the hand of the passer.

Below is the definition of a forward pass out of the rule book.

Article 1  Definition. It is a forward pass if:

(a) the ball initially moves forward (to a point nearer the opponent’s goal line) after leaving the passer’s hand(s); or

(b) the ball first strikes the ground, a player, an official, or anything else at a point that is nearer the opponent’s goal line than the point at which the ball leaves the passer’s hand(s).

I will know on Thursday when I get the list of scoring changes from the league if this is changed to a pass or not, but I wouldn\’t count on it happening. We will have to wait and see if Mendenhall loses rushing yardage and Roethlisberger gains a passing touchdown and 13 yards passing.

It might not be a big deal to many, but I bet it could change the outcome of some fantasy games.