If you have paid close attention to the first two games of the Pittsburgh Steelers this year, you probably have seen some miscommunication at times when trying to switch personnel groupings in and out between plays. This is not too surprising, especially since it is early in the season and they have a new offensive coordinator in Todd Haley and a wide receiver that missed all of training camp in Mike Wallace.

Now we do not know exactly who to blame, but on Sunday in the win against the New York Jets there was a bad personnel grouping switch that resulted in the Steelers offense having just 10 men on the field during their final scoring drive. If that wasn\’t bad enough, it was a play that quarterback Ben Roethlisberger was sacked on.

The play in question happened with 9:39 left in the game and it was the 1st and 10 play from the Jets 45 yard-line. On the field were the normal 5 offensive linemen, Heath Miller, Emmanuel Sanders, Antonio Brown, Isaac Redman and of course Roethlisberger. 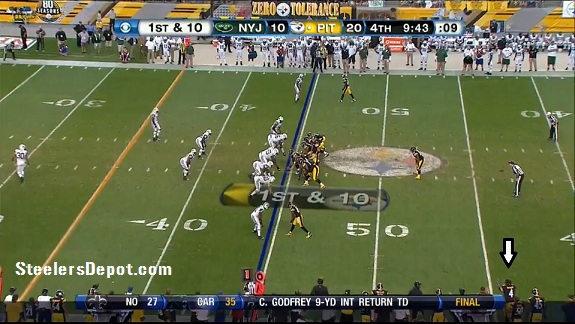 As you might can see in the still shot, Byron Leftwich was one of the few on the sideline to notice it. The Steelers still had one timeout left at the time, but it wasn\’t used. Below you can see the animated gif of the camera shot from behind the play to count up the bodies yourself.

To make matters worse, the very next play was the false start on Maurkice Pouncey, which then had the Steelers facing a 2nd and 18 from their own 47 yard-line. Luckily Roethlisberger connected with Redman on the next play for 14 yards and the offense then faced a very manageable 3rd and 4, which they converted.

These types of mental lapses are what can really hurt a team and hopefully the Steelers get these under control quickly.