Stats in the preseason are worthless, but they sure are fun to look at nonetheless. One thing that sticks out above everything else, both in the stats and on the field, was the play of Pittsburgh Steelers quarterbacks during the preseason.

What also jumps out statistically is that the four quarterbacks also combined to throw the second least amount of passes (99) in the preseason. That was the result of new offensive coordinator Todd Haley running the ball 137 times versus having the quarterbacks drop back 121 times. Not a bad balance, even though it was preseason.

On a down note, the quarterbacks were sacked 14 times total in 4 games, 4th worst in the league.

During the preseason we were treated to running backs catching 19 passes out of the backfield, which equates to nearly 5 a game. Rookie Chris Rainey caught 7 of those passes for 66 yards and a score.

We all know that the NFL it is a quarterback driven league, and while preseason stats are indeed worthless, the quarterback play was certainly above the line. Hopefully it continues on into the regular season. 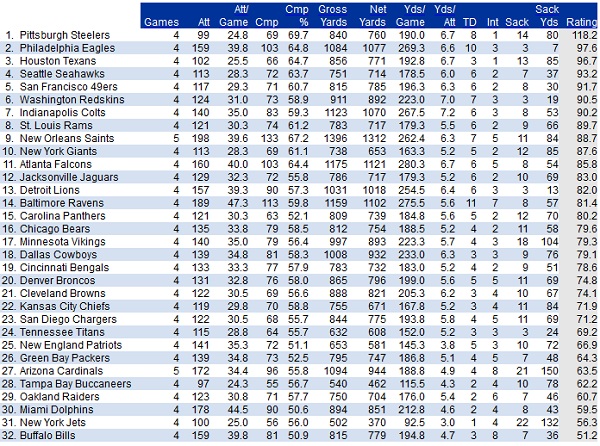