There is euphoria in Steeler Nation today thanks to the magic pen used by Pittsburgh Steelers chief contract negotiator Omar Khan over the last 16 days. If you read my work here religiously, you know that all of this comes as no surprise to me. Despite the perceived salary cap hell that the Steelers were faced with immediately after the 2011 season ended, Khan and the Steelers have managed to slash $29.398 million off of the 2012 with the restructuring of five contracts and the termination of two more.

If you have not been following along, here is a quick recap of all of the moves that have been made.

It all started with the restructuring of the LaMarr Woodley contract. Woodley was scheduled to count $11.5 million against the cap in 2012. He was originally due a base salary of $3.4 million and also due a March roster bonus of $5.5 million. The Steelers lowered his base salary down to $700,000 and combined that $2.7 million along with his $5.5 million roster bonus and turned it into a signing bonus which they can prorate over the remaining years of his contract. Woodley was basically cut a check for $8.2 million to do this. Not a bad day at the office. That restructure saved the Steelers $6.56 million against the 2012 cap.

The next moves that were made were the contract terminations of Bryant McFadden and Arnaz Battle. McFadden was scheduled to count $2.666668 million against the cap and Battle was scheduled to count $1.3625 million. The McFadden base salary of $2.5 million was saved as was the $1.0375 million base salary of Battle. Those two moves saved 3.5375 million of cap space and created only $491,668 in dead money charges for 2012.

Next up on the restructure list was Lawrence Timmons. His contract was a restructure much like that of Woodley as his $2.625 million base salary was lowered down to $700,000 and the difference of $1.925 million was rolled together with the $4.5 million roster bonus that he was due and turned into a signing bonus that will be prorated out over his remaining contract years. Timmons was scheduled to count $9.125 million against the cap, but restructure dropped that down to $3.985 million, a savings in 2012 of $5.14 million. Timmons received a check for $6.425 million for just signing off on it.

After three restructures and two contract terminations the Steelers had cleared $18.5205 million of cap space, but they were not done yet. Earlier this week Willie Colon stopped by to see Khan and had his year old contract restructured as well. Colon had $3.8 million of the $4.5 million base salary he was due turned into a signing bonus. It lowered his 2012 cap hit of $5.7 million down to $2.85 million, another savings of $2.85 million.

That had the Steelers at a total cap savings of $21.3705 million as they headed into Thursday. Next up was the big contract of Ben Roethlisberger. The Steelers lowered his base salary of $11.6 million all the way down to $900,000. The difference of $10.7 million was paid out as a signing bonus. It lowered the $16.92 million cap hit that Roethlisberger was scheduled to have down to $8.895 million, which created a cap savings of $8.025 million.

When the smoke had all cleared on Thursday, Khan and the Steelers had managed to trim $29.3955 million off of the cap since February 7th. The Steelers projected Rule of 51 salary cap total now sits at $126,992,038 million and that number projects all of the tenders to the restricted free agents and exclusive free agents as well.

That number, combined with their $2 million worth of credits, which are outlined in the new CBA, puts them right on top of being compliant cap wise. There are bound to be a few more terminations and perhaps another restructure coming according to general manager Kevin Colbert on Thursday, but the Steelers have most their work done now. The rest really depends on what final happens with Mike Wallace over the course of the next few weeks.

For those that are worried about what these restructures are doing to the 2013 cap number, I have outlined that here. Also if you missed my post on how a contract restructure works in depth, you can read that here.

Now you see the results of the magic pen and how the “Math of Khan” worked. 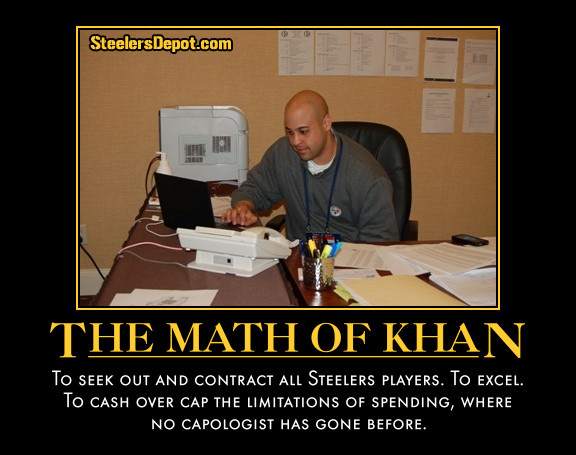