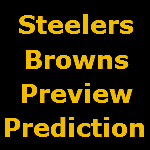 It is the final game of the 2011 regular season for the Pittsburgh Steelers as they look to beat the Cleveland Browns before they head into the playoffs. A Steelers win combined with a Baltimore Ravens loss or tie against the Cincinnati Bengals on Sunday would give them the AFC North title along with a first round bye. As I do every week, here are my 7 things to look for against the Browns as the Steelers look to finish the regular season at 12-4. Also included is my score prediction for the game.

Healthy Hillis – Last week St. Louis Rams running back Steven Jackson ran for 103 yards on 24 carries against the Steelers and it was the first time an opposing team\’s running back has rushed for 100 or more yards against the Steelers since Houston Texans running back Arian Foster ran for 155 yards way back in week 4. Browns running back Peyton Hillis was not healthy the last time these two teams met back in week 14 as Hillis rushed for just 10 times in that game for 25 yards. Hillis also only played just 26 snaps in the last meeting. Since that game Hillis has had his health improve and he has rushed for 99 yards against the Arizona Cardinals and 112 yards just last week against the Ravens since that last meeting. The Browns will look to get the ball in the hands of Hillis early and often Sunday in an attempt to ball control and keep the Steelers offense off the field as much as possible. Inside linebackers Lawrence Timmons, James Farrior and Larry Foote must shed their blockers at the second level and fill the gaps better than they did last week. The last thing the Steelers need in this game is for safeties Troy Polamalu and Ryan Clark to have to make several stops on the bruising 250 pound running back.

Remember The Titans Game – The best way to avoid quarterback Ben Roethlisberger from taking a ton of hits in this game is to use a game plan similar to the one used in week 5 against the Tennessee Titans. In that game Roethlisberger used a lot of three step drops and got the ball out quickly. He was sacked just once in the game and was rarely touched while completing 24 of 34 passes for 228 yards. Running backs Rashard Mendenhall and Isaac Redman still have a lot of tread left on their tires and this would be a good game to have a 50/50 run pass balance as well. Browns weak side linebacker Kaluka Maiava is playing with a broken left hand that forces him to wear a cast on it. The Steelers have shown success as of late running the counter to the weak side of the formation and this would be a great game to continue that and force the action with the injured Browns linebacker.

Motivated Marcus – Head coach Mike Tomlin got his message across last week to rookie right tackle Marcus Gilbert with the benching, and Gilbert did respond on both of his snaps he received in the game. The rest he received last week was not a bad byproduct of the benching and I fully expect you will see a young lineman playing with his hair on fire against the Browns. Browns rookie defensive end Jabaal Sheard will be no picnic for Gilbert, but he handled him well in the run blocking department the last time he faced him a few weeks back, along with the help of right guard Ramon Foster. Sheard did manage some pressures in that game however and Gilbert will get a chance to redeem himself in that department on Sunday. Gilbert simply can\’t allow Sheard any free shots on Roethlisberger in this game.

Seek Sheldon – It has been an up and down season for Browns cornerback Sheldon Brown and he had perhaps his worst game of the season when he faced the Steelers a few weeks ago giving up 4 catches in that game for 67 yards. Antonio Brown and Mike Wallace should both get some snaps against Brown on the outside and this should be a matchup that the Steelers look exploit if they see the right look.

Beware Of Kitchen Sinks – This is the Super Bowl for the Browns as they would love nothing more than to head into their offseason with a win against the Steelers, especially if it should end up costing the Steelers the #2 seed should the Bengals beat the Ravens. Seneca Wallace will be under center for them this time around with Colt McCoy still sidelined and he is much more of a mobile quarterback. The Browns will likely dig deep into their playbook in this game and the Steelers defense should expect the unexpected. Josh Cribbs can also make big plays on offense, and although the Browns have not used him like they have in years past, this would be the perfect time for them to revive some gimmicks using him. The Rams tried a fake punt last week against the Steelers, so the special teams unit will once again need to be on their toes as well.

Happy New Years Hines – The elephant in the room, or in this case in Cleveland Municipal Stadium, on New Years Day will be veteran wide receiver Hines Ward as he is just 5 catches from 1,000 for his career. Look for Ward to be fed the ball early on in the game with a few quick bubble screens, and or shovel passes, to get him his 5 catches by halftime. The longer they wait to force him the ball, and you know they are going to, the harder it will be to get him to reach the milestone. It is hard to carry out both a winning game plan and feed a player for a milestone, but if any offense can pull it off, it is the Steelers offense.

Injuries – While a win against the Browns certainly would be nice, especially if the Bengals knock off the Ravens, the Steelers must come out of this game as healthy as possible as they head into the playoffs. The ankles of Roethlisberger and center Maurkice Pouncey are the biggest concern heading into this game and hopefully both will be limited to just 25-30 snaps. Just enough to knock the rust off and get the Steelers up big on the scoreboard. Keep your fingers crossed that everyone comes out of this game healthy as the Steelers have fought through enough injuries this season.

Steelers Browns Prediction – This is a tough game to gauge not knowing how long players like Roethlisberger, Pouncey and Polamalu might play. This could wind up being a blowout just like week 17 last season or come right down to the wire. This is a game that even the Steelers backups should be able to win, but with that said, I do not think it will be a blowout this time around. Steelers win, but they do not cover. Steeler Nation will predictably panic as a result.