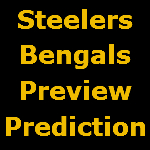 The Steelers are coming off of a sluggish win last Sunday night against the Chiefs and can not expect to have the same type of performance this week against a good Cincinnati Bengals team if they expect to complete the season sweep. A solid win will go a long way in ensuring that the Bengals are knocked out of the race for the AFC North crown and will build good momentum for the team heading into a short week. A loss by the Steelers will pretty much mean that they will have to make the playoffs as a wild card team. As I do each and every week, here are 7 things to look for in the game on Sunday and my prediction for the game is at the bottom.

Geathers Yourself Marcus – Bengals defensive end Carlos Dunlap is expected to miss his second straight game and the third in the last four this Sunday. The Steelers will again catch a break as Dunlap did not play the last time the two teams played just a few weeks back, but his replacement Robert Geathers gave Steelers rookie right tackle Marcus Gilbert a few fits. Geathers managed to get 2 sacks the last time he went up against Gilbert and it was likely his best single game this season. Gilbert will have a second chance now to prove the first game was a fluke for Geathers. Gilbert needs to get off the ball quickly and not allow Geathers to get his arms inside the chest like he did a few weeks back, as the pass protection needs to be better this go around for quarterback Ben Roethlisberger. Ben was sacked 5 times in total back in week 10.

Sacks Full Of Pressure – Back in week 10 the Steelers defense did not record a sack of Bengals quarterback Andy Dalton and had very few pressures on the rookie. As it looks right now, LaMarr Woodley could return after missing the last 3 games with a hamstring injury suffered against the Patriots back in week 8 and he will be a sight for sore eyes if he plays. While Jason Worilds has made some progress over the course of his starts in place of Woodley, he is not yet near as consistent as Woodley is at getting after the quarterback. On the other side, James Harrison has been pretty much held in check since his return to the lineup against the Ravens back in week 9 and Harrison was held both literally and figuratively in check the last time he faced Bengals left tackle Andrew Whitworth. Dalton gains more confidence every game he plays and must pay dearly if he decides to hold the ball longer in the pocket. The Steelers must have a multi-sack game this time around.

Primary On The Secondary – The Bengals could be without cornerback Nate Clements, who is hampered by a hamstring injury, and that means the Bengals could be forced to play Kelly Jennings opposite Pacman Jones. The nickel spot may be manned by Brandon Ghee or safety Chris Crocker and both have also been on the Bengals injury report this week. Jennings is a huge liability outside for the Bengals, so expect the Steelers to try to get Antonio Brown lined up one on one with him outside as the Bengals will once again look to take Mike Wallace away with safety protection on his lined-up side over the top. Emmanuel Sanders, Jerricho Cotchery and Heath Miller also look to have favorable match-ups in the slot thanks to the Bengals lack of depth and health problems. If Roethlisberger gets in kind of protection throughout the day, he should really feast on this secondary.

Stopping The Runs On 2nd Down – Sure, shutting down the running game is a captain obvious statement, but where the Steelers defense had problems back in week 10 against the Bengals was stopping runs on 2nd down. The Bengals running backs had 8 rushes for 42 yards in the first meeting on 2nd downs with 4 of those 8 runs producing 1st downs. Considering that Cedric Benson, Bernard Scott and Brian Leonard combined for 98 yards rushing in that game on 24 carries, you can see nearly half their yards came on the 8 second down rushes.

More 6 DBs? – The Steelers have not played much dime or big nickel this year outside of the game against the Patriots, but the Bengals young group of receivers combined with tight end Jermaine Gresham might present the perfect opportunity to break out the 6 DB sub-package on 3rd downs on Sunday. Gresham is a huge mismatch if covered by a Steelers linebacker or safety in man-coverage and they have seen enough zone to know where the soft areas are. One would think that defensive coordinator Dick LeBeau will have a few new wrinkles this time around for the Bengals and it will be interesting to see if a 6 DB sub-package is one of those wrinkles mixed in.

Continue Turnover Streak – The defense has recorded 6 turnovers in the last two games with 2 being created by William Gay the last time theses two teams played. The 4 last week against the Chiefs were all pretty much gifts, but they all look the same on the stat sheet. The Steelers offense must seize the opportunity of any short fields they get thanks to the defense and must turn those turnovers into points, preferably 7 points.

60 Minutes This Time – The Steelers bounced right out to a 14-0 lead in the last meeting, but an interception off a bobbled catch attempt by Miller on the Steelers 3rd offensive possession and a 3 and out on their fourth, let the Bengals right back in the game. The offense has to do a better job of playing for a full 60 minutes and they have only put up 7 points in the second half of the last two games. hat is a concern. There is no such thing as coasting in a NFL game and the defense can not keep being put into a situation of having to win the game by stopping an opponents final drive. (see the 2nd Ravens game)

Steelers Bengals Prediction – The Bengals are really not a healthy team right now and playing at Heinz Field this time around will also not help their cause. Should a 100% healthy Woodley play in this game, it will be a tremendous boost for the Steelers defense. The Bengals secondary is a mess right now and I fully expect Roethlisberger to have a big game in this one. I think that the only way the Steelers lose this game is by giving it to them via turnovers. The Steelers get the cover and the season sweep over the Bengals.